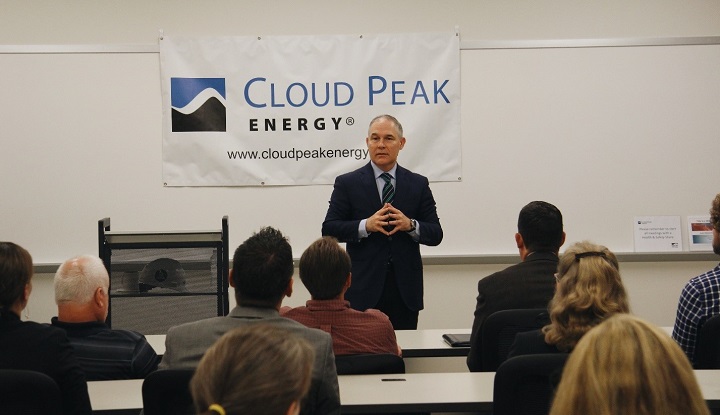 This story was produced by MapLight in partnership with WyoFile.

After a trio of high-profile public hearings that have featured heavy criticism of the Trump administration’s plan to repeal limits on greenhouse gas emissions from power plants, the nation's third-largest coal producer is taking steps to avoid a fourth round of attacks at a final hearing on Tuesday.

Cloud Peak Energy, the Wyoming mining company, and its employees have given $375,000 in political contributions since 2010 and spent another $1.9 million on federal lobbying. Emails obtained by MapLight through a public records request show the company is pushing for more industry support at the Environmental Protection Agency's fourth and final public hearing on its Clean Power Plan repeal plan in Gillette, Wyo.

“We encourage you, and your colleagues, friends and family, to stand up and let your voice be heard; help President Trump and the EPA repeal the rule in order to keep existing coal-fueled power plants open,” wrote Michelle Butler, a public affairs manager for Cloud Peak Energy, which operates three mines in the Powder River Basin of Wyoming and Montana. “We all know how much this impacts our organizations, businesses and communities,” she wrote.

Butler said that Cloud Peak Energy was organizing a meetup just before the EPA’s listening session, where members of Wyoming’s congressional delegation would speak in support of repealing the Clean Power Plan. She sent along talking points, which included the assertion that the rule “was designed to punish the U.S. coal industry, all for negligible environmental benefits.”

Thirteen Cloud Peak Energy employees registered to speak at the listening session, according to a preliminary list released by the EPA. The approach of sending coal company workers to the Clean Power Plan hearings, however, hasn’t worked completely to the industry’s satisfaction. Despite a contingent of hard-hatted Murray Energy miners attending a November meeting in West Virginia, the plan drew harsh criticism from environmental advocates.

A Cloud Peak Energy spokesperson did not respond to MapLight’s request for comment.

EPA Administrator Scott Pruitt announced in October that the agency would repeal the Clean Power Plan, devised by the Obama administration to cut carbon emissions from power plants by 30 percent by 2030. Power plants are responsible for more than one-third of all carbon dioxide emissions, and coal-fired plants especially are considered to be major culprits behind rapidly accelerating climate change. Pruitt previously fought to block the rule as Oklahoma’s attorney general.

While the coal industry has opposed the Clean Power Plan, the rule may pose a unique threat to Cloud Peak Energy, since the company only sells its coal to electricity providers. In its annual report last year, company officials wrote that if the Clean Power Plan was implemented as written, “demand for coal could ... be further decreased, potentially significantly, and adversely impact our business.”

The company apparently has a friend in Pruitt. Campaign finance records show that Cloud Peak Energy donated $25,000 to the Republican Attorneys General Association in 2015-16. As Oklahoma’s attorney general, Pruitt served as the organization’s chair for two years and sat on its executive committee while its members worked with donors to challenge Obama-era environmental rules.

In August, Pruitt visited Cloud Peak Energy's office near Denver and pledged to bring “a degree of humility” to governance, according to a press release from the company. “Our country is so rich in resources and so strongly committed to clean air, clean water, and a great environment, that we don’t have to make a choice,” Pruitt said. “We can have energy-driven growth and strong environmental stewardship.”

The National Mining Association, a trade organization representing mining companies, held its board of directors conference at the Trump International Hotel in Washington, D.C., in October, just days before the administration moved to repeal the Clean Power Plan. Cloud Peak Energy CEO Colin Marshall was listed as one of the National Mining Association’s directors in tax documents between 2014 and 2016.

Wyoming is the nation’s leading coal producer, providing about 40 percent of the U.S. supply. Pruitt is scheduled to visit Wyoming later this week.