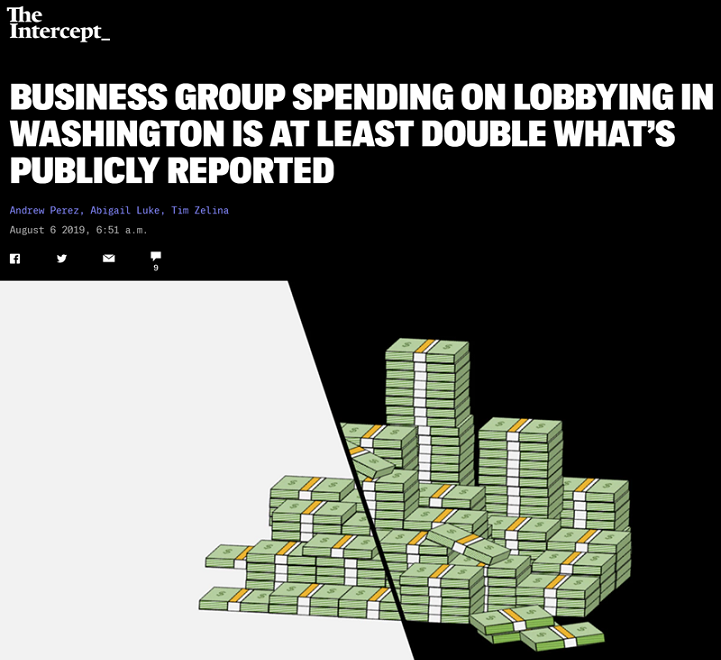 MapLight, The Intercept, and Tarbell published a story in August of 2019 about undisclosed lobbying by business groups.

The powerful organizations spending millions of dollars to shape public policy in Washington, D.C. are required to disclose the money they spend on lobbying. At MapLight, we track that information to increase transparency. But in addition to what’s publicly disclosed, there’s a large set of corporate influence tactics that go unreported. Lately, we’ve been working to bring that spending out of the shadows.

Our recent investigation, in partnership with The Intercept and Tarbell, outlines how influential corporate trade organizations and nonprofits spent as much as $675 million in 2017 on unregulated efforts to influence public policy. These business interests exploit loopholes in lobbying rules, which don’t cover many of the tactics of modern campaigning -- such as media relations, social media posts, polling, and broadcast advertising. Already, lawmakers like Sen. Sheldon Whitehouse of Rhode Island and Rep. Ro Khanna of Silicon Valley are pointing to our reporting and calling for reform.

In addition to uncovering the money behind influence campaigns, we’re continuing to track the evolving world of online political campaign tactics—such as bots and troll armies to the spread of fake news, misleading social media ads, and hyper-partisan websites. To  follow the latest, sign up for MapLight’s weekly newsletter, Digital Deception Decoder. We follow the webs of entities that seek to manipulate public opinion, their political spending ties, and the actors working to safeguard our democracy—compiling the information you need right in your inbox.