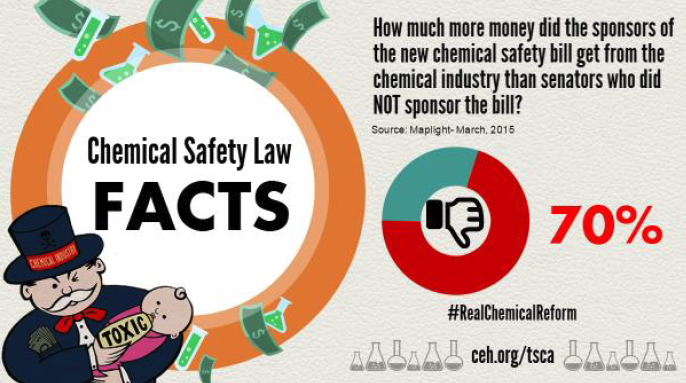 MapLight's data was used in a series of infographics shared by the Center for Environmental Health.

In early 2015, Congress introduced a bill to update the nearly 40-year old Toxic Substances Control Act and overhaul how the federal government regulates chemicals. The proposed reforms were criticized by several states as well as environmental, health, and labor organizations stating that the bill favored industry and other special interest groups by dismantling important regulations while creating barriers for the EPA.

Amid concerns from environmental groups that the proposed regulations favor the chemical industry over public health, MapLight discovered that the industry’s top players have dramatically expanded their political spending in recent years: the top 10 industry donors, including Koch Industries, Bayer, Johnson & Johnson, and Dow Chemical, increased their spending on lobbying just before a precursor to the bill was introduced in the Senate in 2013 and went on to spend $76 million on lobbying in 2014 alone. In addition, these chemical industry groups gave more than $1 million to sitting senators last election cycle; the bill’s 17 sponsors and co-sponsors received nearly 70% more money ($15,176) from them on average than did senators who didn’t co-sponsor the bill.

MapLight's data was spread by Common Cause, Every Voice, LittleSis.org, Stamp Stampede, and many others advocating against the bill’s passage. Our data was also used in the Center for Environmental Health’s Live Tweet held during the Subcommittee on Environment and the Economy hearing on their draft of the Toxic Substances Control Act, and in a series of infographics calling for real chemical reform shared by CEH. In addition, our analysis was shared more than 4,700 times on Facebook, receiving more than 12,000 "Likes,” and was cited in 20 news stories in outlets including The Intercept, The New York Times, The Nation, Truthout, and the Times-Picayune.