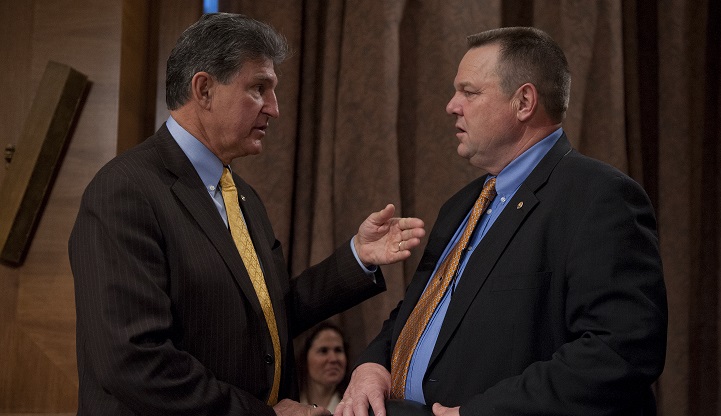 Sen. Joe Manchin, D-WVA., and Sen. Jon Tester, D-MT., are joining other moderate Democrats in the Senate to start a joint fundraising committee for the 2018 election.
Photo By Douglas Graham/CQ Roll Call.

This story was produced by MapLight in partnership with the International Business Times.

Ten Democrats are running for reelection in states won by Trump. McCaskill, Donnelly, Manchin, Heitkamp and Tester represent states that Trump won by double digits. Manchin has an additional hurdle -- a primary challenger running to his left.

While their joint fundraising effort only began two weeks ago, a MapLight review of campaign finance data shows the senators have relied on many of the same donors for their 2018 campaigns. Capital Group, a Los Angeles-based investment management firm, has been a top source of cash for Manchin, McCaskill, Donnelly and Heitkamp. Their employees and political action committee have given more than $210,000 to the senators, according to data from the Center for Responsive Politics. Tester has received $15,400 from Capital Group’s employees and PAC.

Records show that a lobbying firm working for Capital Group has lobbied Congress on issues related to the Department of Labor’s fiduciary rule. The Obama administration regulation requires investment advisers to prioritize their clients’ financial interests ahead of their own, and was written to prevent companies from steering customers towards high-fee products.

Heitkamp, Donnelly and Tester joined Republicans in voting to kill the Labor rule last year. Though President Obama vetoed the measure, the fiduciary rule hasn’t gone into effect yet. The Trump administration has delayed the rule until July 2019 as part of President Trump’s review of existing regulations.

Trump has sought moderate Democratic support for his tax plan, which would slash tax rates for corporations and wealthy individuals. In September, the president invited Heitkamp, Manchin, and Donnelly to dinner at the White House to discuss taxes.