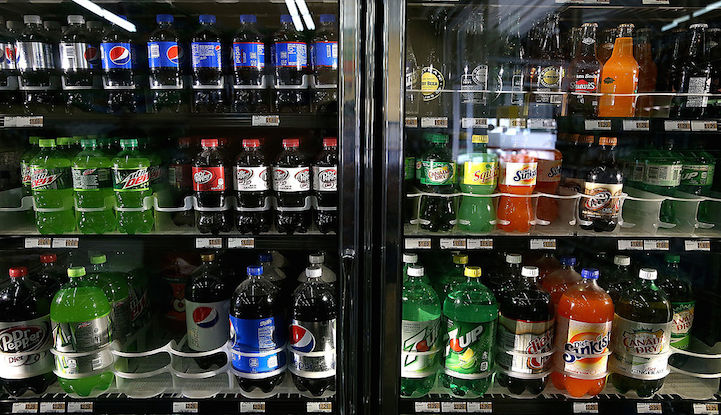 If at first, you don’t succeed, then try again -- on the other side of the country.

Former New York City Mayor Michael Bloomberg, whose bid to ban larger sizes of sodas and other sugar-sweetened drinks in the nation’s largest city earned him a Bronx cheer from the state’s highest court, has given almost $10 million this year to support a pair of Bay Area initiatives that would increase taxes on the beverages.

Bloomberg, the billionaire co-founder of an eponymous financial data services firm, has donated about $5 million to San Franciscans United to Reduce Diabetes in Children, a political committee supporting Measure V, which would levy a penny tax on every ounce of sugar-sweetened beverages sold in the city. The former mayor also has contributed more than $4.7 million to Citizens for Healthy Oakland Children, which is supporting Measure HH, a proposal that would also add a one-cent tax on every ounce of soda and other sugar-sweetened drinks.

Yet for all Bloomberg’s largesse, his contributions haven’t yet prevented soda tax advocates from being financially outgunned by the beverage industry. After a relatively slow start over the summer, the the Washington D.C.-based American Beverage Association has picked up the pace, giving $18.9 million to fight the San Francisco measure; $5.4 million on the Oakland battle; $500,000 to oppose Measure 2H, a similar Nov. 8 ballot item in Boulder, Colo.; and $50,000 against Measure O1 in Albany, Calif.

The quartet of high-stakes ballot measures represent a potential turning point for both the soda industry and public health advocates. Beverage manufacturers are casting the initiatives as grocery taxes that will cost consumers and erode profits in the $278 billion soda industry, while advocates see a rare opportunity for voters to address a public health issue.

When voters in San Francisco, Oakland, Albany and Boulder cast their ballots next month, the momentum will be on Bloomberg’s side. After his administration’s 2012 ban was overturned by the New York Supreme Court, Bloomberg -- who left office in late 2013 -- turned his attention to a 2014 Berkeley effort to become the first city in the nation to tax sugar-sweetened beverages. The former mayor gave $647,000 to the committee supporting the tax, which passed with 76 percent of the vote.

(Bloomberg skipped an opportunity to become involved in a 2014 San Francisco initiative that would have levied a two-cent-per-ounce tax on sodas and other sweetened drinks. The measure, which required a two-thirds majority, only attracted support from 55 percent of voters after the beverage industry spent $9.5 million to help defeat it.)

The former mayor also was on the winning side of a Philadelphia City Council vote in June that levied a 1.5 cent-per-ounce tax on sodas. Bloomberg, one of the world’s wealthiest men, gave $1.5 million to Philadelphians for a Fair Future, a pro-tax “dark money” organization that is not required to publicly disclose its donors.

By soda tax battle standards, the Philadelphia vote was a typical affair. The $1.5 million from Bloomberg, combined with a $400,000 infusion from the Action Now Initiative funded by Houston billionaire investor John Arnold and his wife, Laura, amounted to roughly one-fifth of the $10.6 million the beverage trade group spent lobbying, according to city records.(Disclosure: The Laura and John Arnold Foundation is a donor to MapLight).

Soda tax advocates have outspent the industry in only one of four initiative races this election. Boosted by contributions from an offshoot of the Colorado Health Foundation, advocates of the Boulder tax have spent $671,000 so far this year; the opposition, funded by the American Beverage Association, which has been footing the bill to fight the measures in all four cities, has spent $282,000.

Earlier this summer, Citizens for Healthy Oakland Children had raised only $18,545, or $1 for every $32 collected by the beverage industry. Since July, however, the infusion from Bloomberg has narrowed the gap considerably. The opposition committee has spent $3.8 million, according to city records; supporters of the tax have raised more than $5 million, including $4.7 million from Bloomberg and $575,000 from the Arnolds.

Even with the gap narrowing, big spending on advertising may determine the outcome. Since three of the four initiatives are in the Bay Area, both sides can amplify their messages across Oakland, San Francisco and Albany since all three cities are part of the same media market. And the spending gap is widening in San Francisco, the largest of the trio. The beverage industry has spent more than $10 million of a war chest that totaled $18.9 million through late September; supporters of the proposed tax had spent a little more than $2.3 million from a $6.4 million campaign treasury.

A disclosure report filed Oct. 3 with the Albany City Clerk’s office showed the beverage association had spent $76,683 campaigning against the proposal; the pro-tax forces reported raising $5,425, which included a $5,000 donation from the American Heart Association.

(Disclosure: The author is a former employee of Bloomberg L.P.)

Methodology: MapLight analysis of contributions to committees supporting and opposing ballot measures that would tax sugar-sweetened beverages in the November 2016 elections using the latest data available from local campaign finance reports as of October 18, 2016.