Watchdogs: HHS Secretary Tom Price May Have Violated Election Rules To Get His Job 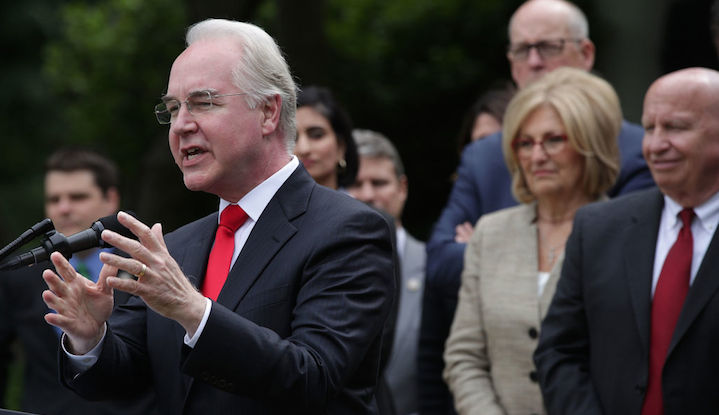 Health and Human Services Secretary Tom Price speaks during a Rose Garden event at the White House in May, 2017.
Photo by Alex Wong/Getty Images.

The Campaign Legal Center and Democracy 21 filed a complaint with the Federal Election Commission calling the payment to America Rising Corp. a “clear conversion of campaign funds for personal use and violation of federal law.” The nonpartisan, Washington, D.C.-based organizations wrote that the Price campaign’s payment to America Rising Corp should qualify as an expenditure for personal use, because it appears to be connected to his confirmation process -- and not related to his reelection in Georgia or his duties as a congressman, as federal laws require.

In the days before his campaign paid America Rising, Price waded through two rocky confirmation hearings where Senate Democrats grilled him about reports that he had purchased shares in health care companies that stood to benefit from his actions as a lawmaker. The Senate voted to confirm Price 52-47 in February.

Price’s payment to America Rising Corp. was first reported by Slate earlier this week in a story documenting how Price and allies of three other Trump administration nominees had called on America Rising and other outside organizations to help secure their Senate confirmation. Price was the only nominee to pay America Rising from his own campaign committee, according to the letter from Campaign Legal Center and Democracy 21.