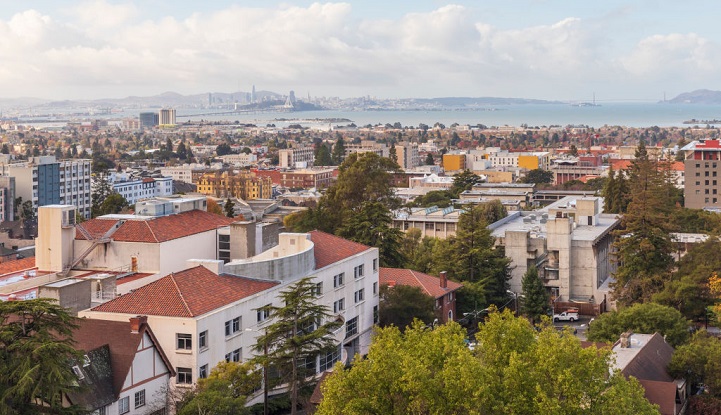 The city of Berkeley, California as seen from Memorial Stadium at the University of California Berkeley in December of 2018.
Photo by David Madison/Getty Images.

In 2016, Berkeley voters approved Measure X1, the Berkeley Fair Elections Act, to create a public funding system for local elections (read our case study of the campaign here). Under this system, candidates for city council and mayor who choose to participate agree to only accept contributions of $50 or less (instead of the regular $250 limit). In return, the city matches contributions they receive from Berkeley residents, six to one. A $10 donation becomes worth $70 to the candidate; a $50 donation becomes $350. The program seeks to empower candidates to run for office on the strength of community support rather than wealthy connections, reduce the influence of special interests in Berkeley elections, and encourage grassroots political participation by amplifying the influence of small donors.

The 2018 election was the first test for the Berkeley Fair Elections program. Four city council seats were up for election, in Districts 1, 4, 7, and 8.1 MapLight’s analysis of campaign finance data suggests that the program successfully met its goals during its first implementation. High candidate participation in the matching funds program significantly reduced candidates’ reliance on money from outside the city, high-dollar donors, political committees, and businesses. The program also successfully expanded the influence of small donors residing in Berkeley: the number of people giving to candidates increased compared to previous years—but the total amount of money they gave to candidates decreased.

Candidates who participated in the matching funds program collectively received over $315,000 from the city; approximately two-thirds of all candidate funding came from public funds rather than from private donors. Four candidates—including three of the four winners—maxed out on the amount of public funding they were allowed to receive from the city ($40,000).

In a survey conducted by MapLight following the election, one candidate commented, “In terms of impacting the election at large, I think public matching funds helped to encourage a more diverse group of candidates into the field—people that wouldn’t have been able to personally contribute a lot to their campaigns were still able to run viable campaigns because of the matching funds. This helped draw in people who worked full time, were students, or didn’t have a ton of savings to run for office.”

Incumbency did remain an important factor in 2018, with incumbents Kate Harrison (District 4) and Lori Droste (District 8) each winning reelection by more than 15 points. Both also participated in the Fair Elections program.

Comparing the total amount of money received by candidates in the 2018 election to the 2014 and 2016 elections sheds light on the impact of public funding. Four city council seats were up for election each year, with the same four districts included in the 2014 and 2018 cycles.

Compared to the 2014 and 2016 elections, the total amount of money donated directly to candidates fell in 2018. In 2014, the 10 candidates for city council collectively raised $219,400. This total grew to over $315,700 across 12 candidates in 2016, likely due to increased public interest as a result of four contested city council races and a concurrent mayoral election. In 2018, the total amount raised by the field of candidates fell to $159,000—significantly less than the amounts raised in 2014 or 2016.

Money matters in Berkeley elections. Of the eight contested races between 2014 and 2017, six seats went to the candidates who raised the most money, while two seats went to a candidate who raised less than one of their opponents. This pattern generally held in 2018, though Fair Elections matching funds may have played a role in some candidates’ success. The incumbents in Districts 4 and 8—Kate Harrison and Lori Droste—both raised more money in direct contributions from donors and received the maximum amount of matching funds. Rashi Kesarwani (District 1) raised less in direct contributions than her opponent Igor Tregub, but including matching funds, her total campaign funds surpassed Tregub’s. Rigel Robinson (District 7) outraised his opponent Ces Rosales in direct contributions, but including matching funds Rosales raised more money overall.

Limiting the Influence of Special Interests

The Fair Elections program reduced the influence of non-individual donors, such as businesses and political committees, as well as non-resident donors in Berkeley’s elections. These funders did not simply turn to independent expenditures: there was no increase in outside spending compared to the 2014 and 2016 election cycles.

In MapLight’s survey, one candidate who participated in the Fair Elections program said, “I was able to gather funds earlier in the campaign, leaving me more time to speak with voters. It allowed me to more easily turn away funds from large organizations or requests from other candidates/organizations for contributions (I didn’t have to say no; it is built in).”

Candidates who participate in the Fair Elections matching program commit to only taking money from individuals, not businesses or political committees. Since most candidates did participate in the program, there were significantly fewer contributions from non-individual entities during the 2018 election. Businesses and political committees donated about $10,000 to candidates in both the 2014 and 2016 election cycles ($9,900 in 2014 and $10,300 in 2016). This fell to less than $4,500 in 2018, with nearly all of it going to one non-participating candidate.

Candidates who participate in the Fair Elections program may accept contributions of $50 or less from any individual, including people who reside outside Berkeley. However, only contributions from Berkeley residents are eligible to be matched by the city. In 2018, this incentivized candidates to campaign more heavily within Berkeley’s borders, rather than cultivating support from outside the city.

In 2018, candidates raised $46,900 from non-Berkeley residents—just 10 percent of all campaign funds, counting public funding. There was a similar decline in money contributed from out-of-state: in 2018, less than $6,800 came in from outside California, comprising less than 1.5 percent of candidates’ total financial backing. Not only did the total amount received from outside Berkeley fall, but the average amount contributed by non-residents dropped by more than half, from $168 in 2014 and $186 in 2016, to $76 during the 2018 election.

One critique of public funding programs is that they may divert money into independent expenditures—spending to influence an election that is not coordinated with a candidate or their campaign. However, the Berkeley 2018 election provides no apparent evidence of an increase in outside spending attributable to the public funding program.

Amplifying the Impact of Small Donors

The Fair Elections program amplified the influence of Berkeley’s small donors. As a result of the program’s reduced contribution limit of $50, candidates relied more heavily on contributions of $50 or less, rather than focusing on individuals who could afford to donate larger sums.

“I think this system is deeply revolutionary. It makes a candidacy like mine, for example, possible and viable. I told students—who were my primary donors—often that if they could forego a single burrito with guac, that would multiply sixfold into a meaningful contribution to keep our campaign running.”

Compared to the 2014 election (when the same council seats were last up for vote), there were more contributors from every Berkeley zip code in 2018, suggesting that the Fair Elections program successfully increased the participation of residents city-wide—not just in wealthy neighborhoods with majority white populations. Figure 3, below, shows the increase in the number of contributors in Berkeley during the 2018 election, as compared to prior elections. This effect is not limited to a single geographic area, but present throughout the city.

Berkeley’s contribution limit is $250. By opting to participate in the Fair Elections program, candidates agree to further limit the size of the contributions they receive to $50. In 2014, the average contribution above the $50 itemization threshold from a resident was $198; in 2016, it was $207. In 2018, the public funding program brought this average down to $78.

In Berkeley, candidates are only required to publicly itemize information about donors who contribute $50 or more. Donations under $50 are reported as a lump sum. One sign of the strength of the public funding program is that the amount of unitemized small donations increased dramatically, from $6,800 in 2014 and $8,200 in 2016 to over $15,300 in 2018. Donations under $50 made up 10 percent of all direct contributions in 2018, as opposed to just three percent in 2014 and 2016.

Most candidates continued submitting matching requests for contributions through October or November. The two incumbents, Harrison (District 4) and Droste (District 8), however, hit their public funding caps early and stopped submitting matching requests in April and June respectively. Ninety-two percent of their match-requested contributions came in the form of $50 donations.

The Berkeley Fair Elections public funding program underwent its first test in the 2018 election. Our analysis shows that the program effectively met its goals: it empowered candidates to run for office based on the strength of their community support, reduced the influence of special interests in Berkeley elections, and amplified the voices of small donors in the political process. Programs like this set the stage for governments that better represent the interests of the people and democracies in which wealth doesn’t control access to political voice.

1Berkeley uses a ranked choice voting system. This means that all candidates run in November without a primary.

2 At least one of the remaining four candidates was disqualified from participation in the Fair Elections program due to a minor error: they had loaned $100 to their campaign—necessary to open a checking account at many banks—violating the $50 contribution limit. This type of error was remedied in amendments passed by the Berkeley Fair Campaign Practices Commission and City Council following their review of the program in 2019.

3 Since this data comes from candidates’ matching fund requests, there are no comparable numbers for the 2014 or 2016 elections. Note also that because matching fund requests were limited to contributions from Berkeley residents, this number excludes small donations from non-residents, as well as small donations to candidates who had already reached the maximum amount disbursable from the Fair Elections program.

Unique contributors were estimated by grouping contributions by donor first name, last name, and zip code. All discussions of resident contributors were based on whether the donor reported a Berkeley address. Maps including zip code outlines were retrieved from DataSF.