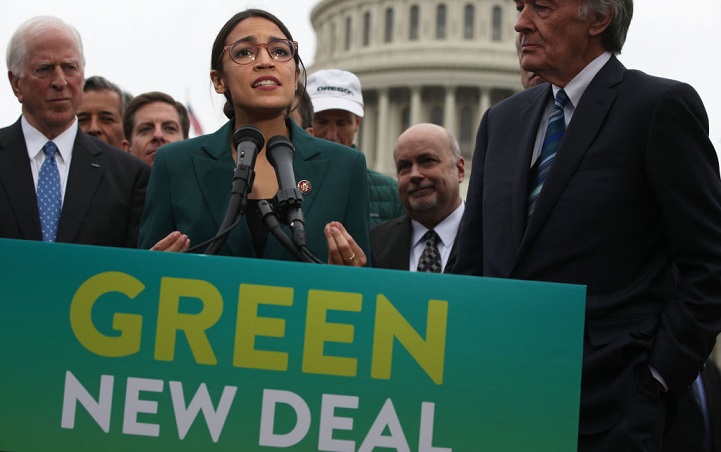 At least 10 current and potential candidates for the 2020 Democratic presidential nomination won’t be losing much oil and gas money because of their support for an ambitious plan to wean the country from its dependence upon fossil fuels.

The nation’s 10 largest oil and gas companies and their employees have given the Democratic candidates barely more than $165,000 over the last six years for federal campaigns, according to a MapLight analysis.

Republicans have viewed the Green New Deal in stark terms, with one dark money organization describing it as “nothing more than the latest job-killing, socialist wish list from the radical left.” Senate Majority Leader Mitch McConnell, R-Ky., announced on Feb. 12 that he would schedule a vote on the Senate resolution to put the measure’s supporters on record.

At least one poll shows more than 80 percent of registered voters support the Green New Deal, however, and the relatively tiny contributions from the 10 energy companies, which have a combined worth of almost $900 billion, indicate that the Democratic contenders are unlikely to suffer financially from a vote.

Even the biggest recipient of oil and gas money among potential and current candidates, former Rep. Beto O’Rourke, a Texas Democrat who unsuccessfully challenged Sen. Ted Cruz’s 2018 re-election, has called the plan “the best proposal” for curbing the effects of climate change. O’Rourke received $141,903, more than 85 percent of the total amount given by the major energy companies to the 10 prospective and current candidates.

All six senators expected to battle for the nomination are cosponsors of the resolution, unveiled on Feb. 7 by Sen. Ed Markey, D-Mass., and Rep. Alexandria Ocasio-Cortez, D-N.Y. Senate Majority Leader Mitch McConnell, R-Ky., has promised a vote TK in hopes of rallying opposition to the plan, which would dramatically alter the shape of the $20 trillion U.S. economy.

Four cosponsors of the Green New Deal resolution reported four-figure sums from the major energy company employees; all have taken positions that are highly unpopular with the nation’s $2 trillion oil and gas industry:

The MapLight analysis is based upon data from the Federal Election Commission for the 2013-18 election cycles. The 10 largest oil and gas companies (ExxonMobil, Chevron, ConocoPhillips, EOG Resources, Occidental Petroleum, Phillips 66, Marathon Petroleum, Valero Energy, Halliburton, and Pioneer Natural Resources) were determined by the NASDAQ market capitalization as of Feb. 12, 2019. Former Vice President Joe Biden and former Housing and Urban Development Secretary Julian Castro were omitted from the analysis; neither has run a federal campaign during the last six years.