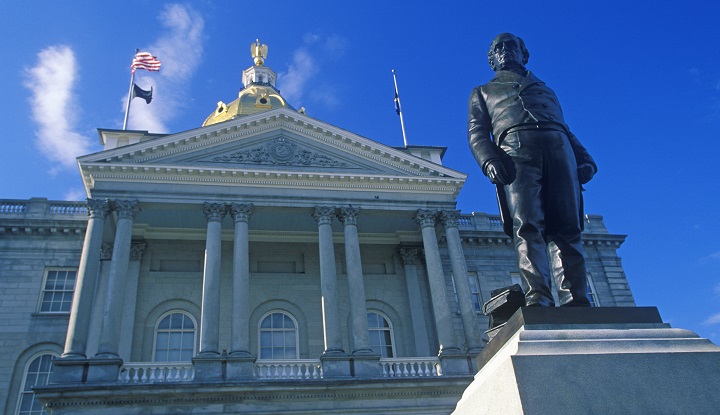 The State Capitol of New Hampshire in Concord.
Photo by Visions of America/UIG via Getty Images.

All around the country, the public is becoming increasingly disenchanted with special interests dominating our democracy. Reform is brewing in New Hampshire, where, in 2019, legislators will introduce a “Voter Dollars” bill to create a voluntary public funding system for state elections. The bill, drafted with bipartisan support, would give each registered voter four $25 certificates that they can contribute to participating candidates of their choice—similar to a program implemented in Seattle in 2017 and others being considered around the country, including in Albuquerque. Participating candidates would agree to only accept small donations and refuse money from lobbyists, businesses, and labor unions. This would give voters greater voice in government and provide candidates with an alternate path to power, allowing them to succeed without relying on wealthy private networks, corporate support, or out-of-state influence.

Why is a system like this needed in New Hampshire? MapLight dove into the state’s campaign finance landscape to answer this question. We examined campaign contributions and independent expenditures in the 2016 state elections and found that outside spending, corporate interests, and out-of-state influence play a major role in shaping New Hampshire elections.