Analysis: Keystone Advocates Have Spent $611 on Lobbying for Every $1 by Opponents 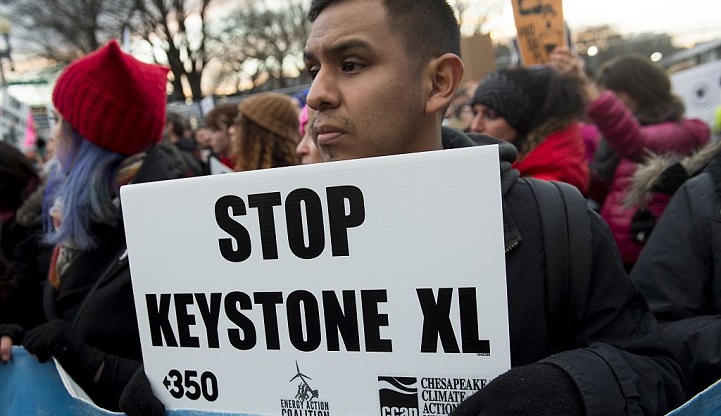 Advocates of the controversial Keystone XL Pipeline have spent more than 600 times the amount on lobbying over the last year than its opponents have mustered, according to a MapLight review of lobbying records.

The pipeline, which is being built in the midst of a pandemic that has shut down a majority of American businesses, has been the topic of lobbying in Senate reports that outline $61.1 million in spending on issues that include the project. The U.S. Chamber of Commerce, the nation’s most active lobbying organization, has spent almost $58.2 million since the beginning of 2019. The American Petroleum Institute reported more than $2 million in lobbying expenditures, and TC Energy, the parent company of the line, said it spent another $900,000. Only two organizations – the Assiniboine and Sioux Tribes of the Fort Peck Reservation, whose water lines would be bisected by the pipeline, and the Oglala Sioux Tribe, which has blamed catastrophic flooding on climate change caused by fossil fuels – reported spending money to lobby federal lawmakers against the project. The tribes have spent a total of $100,000 lobbying on issues that include the project since January 2019.

The enormous disparity, and the ability of TransCanada to begin construction on the 1,200-mile-long project even as the nation’s economy came to a virtual standstill in mid-March and a key water-crossing permit was revoked last week, reflects the political clout of the energy business in the nation’s capital. Construction on the project, which would carry oil from Alberta’s tar sands fields to a depot in Steele City, Neb., was delayed in 2015 by former President Barack Obama; the Trump administration, however, gave it the green light to proceed less than three months after taking office.

The project’s resumption was “great news for Montana jobs and for our nation’s energy security,” said Sen. Steve Daines, a Montana Republican, after the TransCanada subsidiary building the $8 billion pipeline announced its final decision to proceed with the work on March 31. An estimated 100 construction workers already have been brought into Valley County, Mont., which borders Saskatchewan and includes roughly one-third of the Fort Peck Reservation.

Daines is among the top recipients of recent campaign contributions from the TransCanada USA Services Political Action Committee, reporting $5,500 in gifts from the subsidiary; the committee has made $98,500 in total contributions during the current election cycle that began in January 2019.

Even before the deluge of lobbying money flooded Capitol Hill last year, Lance Four Star, chairman of the Fort Peck Assiniboine Council, told the Montana Free Press that Native tribes who opposed the pipeline were “just outnumbered and out-moneyed.”

TransCanada has argued that building the pipeline will “strengthen the continent’s energy security.” Climate activist Bill McKibben, however, argued in a recent New Yorker article that even absent the damage to the earth’s climate posed by continued production from the tar sands, a record supply of oil and proposed limits on oil production in Texas means the pipeline isn’t necessary.

“It’s impossible to think of a less critical thing to be building right now, when we’ve theoretically stopped every business that isn’t ‘essential,’” McKibben wrote.