As Millions of Americans Spent Time Commenting on Net Neutrality, Internet Providers Spent $1.12 For Each Comment 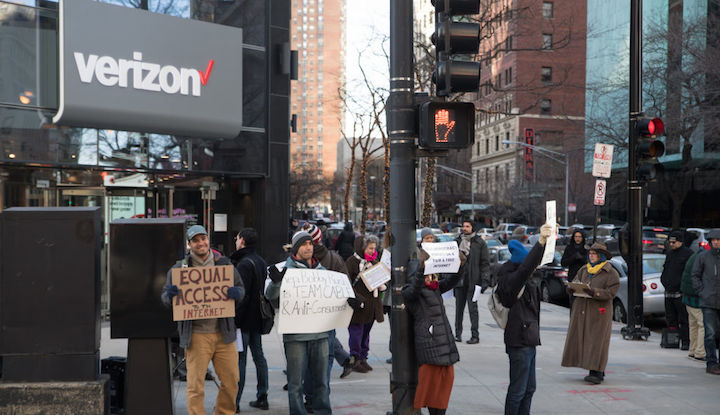 Three of the largest internet service providers and their trade association have spent at least $26.3 million on lobbying the federal government since April 1 -- about $1.12 for every public comment filed with the government on a repeal of net neutrality rules, according to a MapLight analysis.

Roughly 23.5 million comments have been filed with the Federal Communications Commission (FCC) since April, with the vast majority urging the government to keep a rule requiring equal bandwidth treatment for all internet content. A study released in August found 98.5 percent of the unique comments received were opposed to repealing the net neutrality rules. Despite the outpouring of popular support for net neutrality, the Trump administration has said it will scrap the rules that have prevented internet providers from charging more money for unfettered access to some websites.

The battle over net neutrality shapes up as another defeat for Americans, who have been outmuscled by corporate money in the nation's capital on issues ranging from climate change to an overhaul of the tax code.  Ajit Pai, the former Verizon lawyer-turned-FCC head, announced last month that the commission would vote on a proposal to eliminate net neutrality at a Thursday (Dec. 14) meeting.

Between 2008 and early 2017, the three big internet providers -- Verizon, Comcast and AT&T -- and their trade organization, the National Cable & Telecommunications Association, had spent $572 million lobbying federal lawmakers on subjects that include net neutrality. Through early July, about 5.6 million public comments had been registered with the FCC.

Although the FCC formally closed its comment period on its plan to scrap net neutrality in mid-July, comments have continued to pour into the commission's website. Almost 18 million were received after the comment period ended.

The Trump administration contends that net neutrality rules have prevented internet service providers from investing in infrastructure. Supporters of the existing rules, which were created by the Obama administration, argue that repealing net neutrality will allow internet providers to throttle access to websites that don’t offer a competitive or financial advantage.

In some cases, content providers have been acquired by internet providers, leading to fears that their new owners would reduce or block high-speed access to competing content. Advocates of net neutrality note that Hulu, an on-demand video entertainment service that has 32 million customers and competes with Amazon and Netflix, is owned by a consortium that includes Walt Disney, 21st Century Fox, Time Warner, and Comcast.

A clear case of favoritism that runs counter to net neutrality arose in 2014, when internet provider AT&T spent $48.5 billion to purchase DirecTV, a satellite television service. AT&T announced last year that it wouldn’t count streaming of DirecTV shows against its customers’ data caps -- but other content providers’ programs would count against the caps.

Advocates of the net neutrality repeal have said the Trump administration proposal would rely upon voluntary pledges from internet providers to refrain from slowing access to websites. But the repeal would also switch regulatory authority from the FCC to the Federal Trade Commission, even though the FTC’s chairman has said the agency lacks the expertise, authority, and manpower to respond to abuses.

Twenty-eight senators joined New York Attorney General Eric Schneiderman last week to ask the FCC to delay its vote. Schneiderman has asked for a delay based on “a massive scheme” that involved using false identities to submit pro-repeal comments. A November analysis estimated that more than 7.75 million comments on the FCC’s website came from “spambots,” or fake email addresses generated by FakeMailGenerator.com; more than 400,000 came from Russian email addresses.

Schneiderman said the current net neutrality rules “shield the public from anti-consumer behaviors of the giant cable companies that provide high-speed internet to most people. In today’s digital age, the rules that govern the operation and delivery of internet service to hundreds of millions of Americans are critical to the economic and social well-being of the nation.”

MapLight analysis of federal lobbying disclosure filings from the Clerk of the U.S. House of Representatives for major internet service providers and the trade association NCTA, as retrieved on Dec. 11, 2017. Lobbying totals represent money paid by an organization to lobbying on all issues, not just net neutrality. The lobbying total includes amounts spent from April to September 2017.