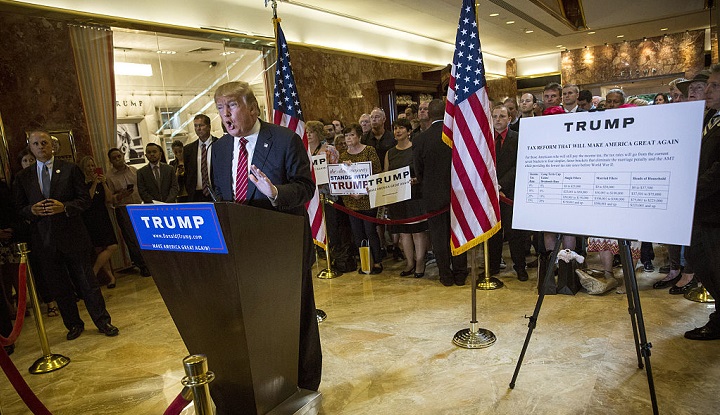 May 11, 2016 - The nation’s tax lobbying industry, already the second-largest source of arm-twisting activity on Capitol Hill, could see its biggest payday in more than three decades if President Donald Trump’s plan to slash corporate taxes is taken seriously by lawmakers.

The centerpiece of the Trump plan, which was released in April, would slash corporate income tax rates to 15 percent from the current maximum of 35 percent. The White House complains that the U.S. has the highest corporate tax rates in the developed world. The Treasury Department, however, found that the typical U.S. corporation only paid a 22 percent effective tax rate between 2007 and 2011.

Even so, there’s a staggering amount of money at stake. A report by the Washington-based nonpartisan Tax Policy Center estimated that the Trump plan could reduce tax receipts by $9.5 trillion during the next decade. Although his plan calls for the corporate tax rate to be cut by more than half, Trump has also pledged to eliminate a number of deductions used by businesses to reduce taxes.

The president’s vow to “drain the swamp” by curbing the influence of Washington lobbyists will be tested during any attempt to overhaul the corporate tax structure for the first time since 1986. Multinational corporations and interest groups have spent $14.4 billion during the last decade to influence lawmakers and officials, according to a MapLight analysis of federal lobbying records.

So far, Trump has shown little interest in ridding Washington of the influence of lobbyists. And corporations aren’t likely to slow their lobbying, given the potential profits. A study by Kansas and Virginia researchers found that corporations that hired lobbyists to influence a 2004 tax bill reaped a 22,000 percent rate of return on their investment. In other words, corporations made $220 for every $1 spent on lobbyists.

About 4,000 registered lobbyists work on tax issues in the nation’s capital, but spending is highly concentrated among large multinational conglomerates and trade organizations. Fifteen companies and organizations, ranging from the U.S. Chamber of Commerce to the American Association of Retired Persons, have spent more than $2.7 billion while lobbying on tax issues since 2008, according to the MapLight analysis.

The lobbying activity has coincided with a continuing slide in the percentage of federal revenues collected from corporate income taxes. During the 1950s, corporate taxes made up 28 percent of federal revenue. By 2015, the corporate share had fallen to roughly 11 percent. Individual income tax receipts have remained relatively stable, accounting for almost half of federal receipts.

Deductions benefitting specific industries -- and in some cases, specific companies -- have helped push down corporate tax collections. The Institute on Taxation and Economic Policy reported in March that 100 of 258 biggest U.S. companies paid no tax during at least one year between 2008 and 2015. At least 18 companies, including General Electric and Priceline, incurred either no tax burden or received a net refund during the entire period, according to the institute’s report.

The U.S. Chamber of Commerce, a Washington, D.C.-based nonprofit that claims to have 3 million members, has been the top employer of tax lobbyists during the last decade. The chamber has spent more than $910 million while lobbying on federal tax policy since 2008, according to lobbying records. The chamber’s coffers have been boosted by six- and seven-figure dues payments from companies that include Dow Chemical Co., Chevron Corp., Southern Co., and Merck & Co. Inc., according to the Center for Political Accountability, a non-profit research organization.

The chamber, which spent almost $101 million alone while lobbying on tax issues in 2016, echoed the White House rhetoric about the need to cut the top corporate tax rate, calling Trump’s proposal “a once-in-a-generation chance to do tax reform, and if we do it right, it can be the single most important step our leaders take to drive economic growth.”

Possible alterations to the tax code are likely to raise the profile for lobbying and law firms that have profited from an arcane and complex tax code. The MapLight analysis found six lobbying firms have together collected more than $500 million in fees during the last decade while lobbying on tax policy.

Lobbying firms have prospered by making use of the “revolving door,” or hiring former Capitol Hill and federal agency staffers as lobbyists. The newly minted lobbyists are well-positioned to persuade their former colleagues to follow policies that benefit their new employers.

Capitol Tax Partners, which received $108.9 million in fees during the last decade while working on tax issues, is a prime example of a lobbying firm that relies upon the revolving door. Eleven of its 12 partners cite Capitol Hill experience on the firm’s website. Among the firm’s clients is Apple Inc., which has stashed more than $231 billion in offshore accounts to dodge U.S. taxes; a “repatriation holiday” pushed by Trump would allow the tech giant to return the money to the U.S. without paying major penalties.

More than two-thirds of the 28 members of Capitol Counsel, which received $69.6 million in lobbying fees while working on tax issues during the decade, cite congressional or other capital experience on the firm’s website. Its clients include Chevron Corp., whose chief executive said earlier this year that he supports Trump’s plan to overhaul the tax code.

Law firms also stand to benefit from potential tax legislation. Akin Gump Strauss Hauer and Feld, the Texas-founded law firm that claimed to be the biggest lobbyist in the capital by revenue in 2014, has received $93.2 million while working on tax-related issues during the last decade. Williams & Jensen, which notes that almost all of its partners “have come from high-level service with various administrations, congressional and Senate leaders, and critical departments and agencies,” has received $83.5 million.

MapLight analysis of federal lobbying disclosure filings from the Clerk of the U.S. House of Representatives that report lobbying activity on tax issues, as retrieved on May 3, 2017. Lobbying totals represent money paid by an organization to each lobbying firm for services on all issues (not just tax policy) and are reported on filings that included tax issues.