Sep. 13, 2010 - Major financial reform (HR 4173) was signed into law in July, but much of the heavy lifting over the measure's specific provisions is still to be done, according to a recent story in the New York Times. New authorities have been handed to government regulatory agencies, but these agencies still have to write the specific rules which will define how their new power is used. The Commodity Futures Trading Commission (CFTC) is one agency with many new rules to write, and with this power has come a lot of attention from lobbyists.

According to the same article, the firms that have the most to gain from maintaining the status quo are the country's largest banks. These banks currently dominate the credit default swaps market, which they have managed to restrict to only the largest firms.

MAPLight.org looked at the most recent lobbying data for the 25 largest banks (according to the Federal Reserve). Six have lobbied the CFTC in the last two years, and each of those did so in the second quarter of this year on issues concerning language in the financial regulations bill. In that quarter alone, these banks spent nearly $6 million on lobbying. In the first quarter of 2010, at which point the financial bill had passed the House, but not the Senate, the same banks topped $7 million in lobbying totals according to the Senate Office of Public Records Lobbying Disclosure Act Database. (Available lobbying data only provides total amounts spent in a filing period and what was lobbied on. However, companies are not required to divide out how much was spent on lobbying each individual agency or congressional office.)

A look back at 2008 and 2009 shows that these totals are unusually high. The final quarter of 2009 was the only one to come close, when banks lobbying (the CFTC among other offices) spent nearly $5 million doing so. In previous quarters, lobbying reports mentioning the CFTC totaled around $2 million to $3 million. Previous to 2008, lobbying reports were filed twice a year, as opposed to quarterly, and only two of the above banks, CitiGroup and Morgan Stanley, lobbied the CFTC in 2007. 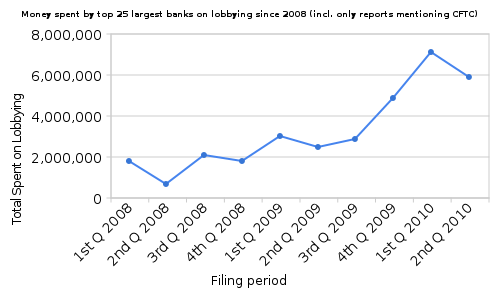