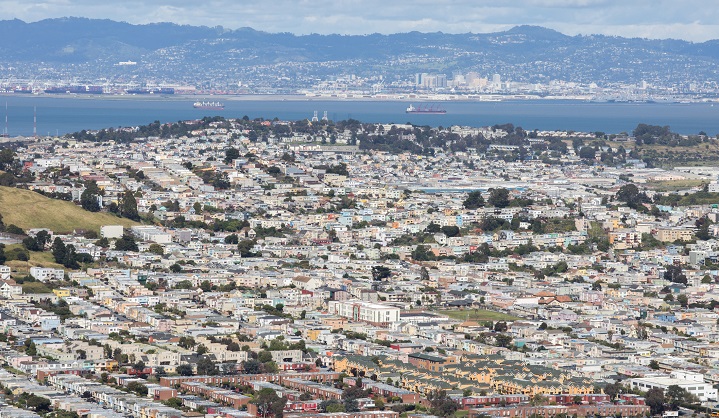 An aerial view of Daly City and Brisbane from San Bruno Mountain State Park in California.
Photo by Getty Images

This report is the second in a series of analyses from MapLight exploring the influence of money on politics in cities in Silicon Valley. See also our work in San Jose, Palo Alto, and Mountain View.

Money in politics influences the political process at every level: who runs for office, who wins, who lawmakers listen to, and what policies get passed. According to a MapLight analysis, in Daly City, California, corporations, unions, and a handful of wealthy donors (mostly from outside city boundaries) play a disproportionate role in elections.

During the 2018 election, the four candidates running for city council in Daly City, competing for three citywide seats, brought in a total of $123,000. The three candidates who were elected each received more money than the sole runner-up. Of all the money raised, only half came from individual donors, and just 10 percent came from city residents. In Daly City, large contributors and special interests play a disproportionate role in elections.

Three citywide city council seats were up for election in 2018 in Daly City, with four candidates competing for office. Two of these seats were open; councilmembers Judith Christensen and Michael Guingona chose not to run for reelection. Ray Buenaventura, appointed to city council in 2011, was the sole incumbent up for reelection. Buenaventura received the most votes of any candidate, 4,000 more than his closest opponent. Pamela DiGiovanni and Rod Daus-Magbual, who had both previously served on the Daly City Planning Commission, secured the remaining city council seats. The sole runner-up was Gabriella Makstman, who fell 1,500 votes short of securing a city council seat.

Altogether, the four candidates raised $123,000 for their campaigns. Almost half of this money was brought in by incumbent councilmember Ray Buenaventura, who secured $58,700 for his reelection. The two other elected candidates, Daus-Magbual and DiGiovanni, took in $26,900 and $22,700 respectively. The runner-up, Makstman, only received $14,800 — a quarter of what Buenaventura raised.

In cities without public funding for elections, there are four funding sources that candidates can pursue when raising money for their campaigns: direct corporate contributions, political committees, individual donors, and self-funding. While no one donor contributed more than $5,000 to a single candidate in 2018, it is worth noting that Daly City does not have any limits on the amount a donor can give to a candidate’s campaign. Individual donors represented the largest source of funding for all four candidates, and both Daus-Magbual and Makstman received the majority of their money from individual donors. In addition to money contributed directly to candidates’ campaigns, some organizations make independent expenditures to support or oppose candidates.

Thirty-one companies donated a total of $19,700 to the city council candidates’ campaigns during the 2018 election cycle. Ray Buenaventura was by far the largest recipient of corporate money. He received $13,200 from companies, compared with only $6,500 received by the other three candidates combined. The largest corporate donor was the Daly City trash and recycling collection firm Republic Services, which gave $1,000 each to Buenaventura and DiGiovanni.

Of the $55,500 contributed by individuals giving $100 or more to the candidates, only $11,900 can be traced directly to Daly City residents — less than 10 percent of all the money contributed. In comparison, 36 percent of all candidate funding came from people living outside Daly City. These donors were from cities such as San Francisco ($19,300), San Mateo ($3,800), and Lafayette ($3,000). A small fraction of contributions ($1,200) came from donors living outside California.

The majority of money spent in the 2018 election came from candidates’ official campaigns. However, two outside groups spent a total of $21,500 on independent expenditures supporting specific candidates. The Daly City Firefighters spent $8,100 on signs, door hangers, and videos supporting Ray Buenaventura, Pamela DiGiovanni, and Rod Daus-Magbaul — the three winning candidates. Additionally, the California Apartment Association spent $13,400 on mailers in support of Buenaventura. While outside spending in general did not exceed the candidates’ own fundraising, independent expenditures supporting Buenaventura ($16,100) were greater than Makstman’s fundraising total ($14,800).

With only two zip codes in Daly City, it is difficult to develop many conclusions about the neighborhoods from which contributions originated. Ray Buenaventura brought in the most money ($2,800) from the 94015 zip code, followed closely by Makstman who received $2,750 from the same area. Rod Daus-Magbual secured the most funding from the 94014 zip code, taking in $2,100 from this area. He did not receive any contributions from the 94015 zip code. Overall, significantly more money was contributed from outside the city than from city residents, but no single outside zip code contributed more than either zip code within Daly City.

Altogether, city council candidates received a quarter of their funding ($38,700) from individual donors giving at least $500. This money came from approximately 43 individuals, only eight of whom reported Daly City addresses. Among these large donors, 26 gave $1,000 or more; the most any individual contributed to a single candidate was $2,500.

Donors giving between $100 and $500 to a candidate comprised 20 percent of campaign funding. The $24,500 from these midsized donors came from an estimated 128 individuals.

By aggregating contributions made by each organization and its employees across all candidates, we can identify the largest contributors in the 2018 election. The top 10 contributors each gave $2,000 or more. Together, these 10 organizations and their employees contributed more than $40,800 — 33 percent of all campaign funding.

Forty-one percent of the money from these top 10 contributors ($16,800) went to Ray Buenaventura. DiGiovanni received 27% and Daus-Magbual received 26% of the top contributors’ funds, while Makstman received the remaining 5%.

The largest contributor by far was the Daly City Police Officers Association, which provided 12% of all candidate funding. In addition to the California Realtors Association and Republic Services, other top contributors included employees of the City & County of San Francisco (one of the area’s largest employers), workers’ unions (AFSCME and UA), attorneys at Kay & Merkle LLP and Cotchett, Pitre & McCarthy LLP, employees of general contractor AGH Commercial, and Bernadette Sy, director of the Filipino American Development Association.

In aggregate, companies in the real estate sector and their employees were one of the largest players in the 2018 election. Altogether, real estate-related companies and their employees contributed $15,700 to the city council candidates — 13 percent of the fundraising total. Ray Buenaventura received the most from this industry, bringing in $10,750 directly to his campaign. In addition to contributing $1,000 to Buenaventura’s campaign, the California Apartment Association independently spent another $13,400 on mailers in favor of his reelection. The rest of the money coming from the real estate industry was divided between Daus-Magbual ($2,750), Makstman ($2,100), and DiGiovanni ($100).

Our analysis shows that while candidates for city council in 2018 did not raise exorbitant sums, only a small fraction of that money came from city residents. More money came from unions, corporations, and wealthy donors living outside the city than from actual Daly City residents. Insofar as fundraising influences who runs for office, who they talk to on their campaigns, and which policies they choose to pursue, these special interests and non-resident donors occupy an oversized role in the democratic process.

Campaign records for the 2018 election were gathered on December 23, 2019 from the most recently amended filings available via the Daly City government website. Candidates’ total contributions include monetary and non-monetary contributions received between January 1, 2017 and December 31, 2018, excluding outstanding loans and miscellaneous increases to cash.

Unique contributors were estimated by grouping contributions by first name, last name, and zip code. All discussions of resident contributors are based on whether a donor had a Daly City address. Maps, including zip code outlines, were retrieved from DataSF.

This report was made possible with support from the Silicon Valley Community Foundation.