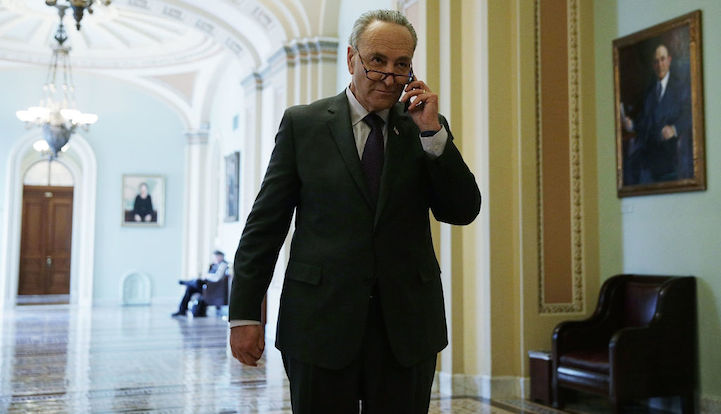 This story is a collaboration between International Business Times' David Sirota and MapLight's Andrew Perez.

April 10, 2017 - Casting Donald Trump as a fox guarding a henhouse, Democrats in recent weeks have slammed the new president for filling his government with corporate officials tied to the same industries they will regulate. Their criticism may make it more difficult for Democrats themselves to continue backing their own industry-tied officials for the limited number of government appointments they still have influence over.

Federal law requires many powerful regulatory agencies to be run by representatives of different political parties. In practice, that has meant the president appointing a majority of members of his own party, and the Senate minority leader naming the minor-party appointees. The practice is leaving New York Sen. Chuck Schumer under growing pressure to use his limited power to appoint regulators who will echo the party’s criticism of Trump’s business-dominated administration and policy.

"Senate Democrats have far too often pushed corporate cronies through the revolving door onto open spots on key commissions like the FTC, SEC, and FCC,” said Jeff Hauser, who runs the progressive-leaning Revolving Door Project. Hauser said rising populism and growing engagement mean that Schumer and Senate Democrats "won't get away with pushing corporate hacks onto public watchdog boards."

Schumer already may to be feeling the heat: his office recently told International Business Times and MapLight it will not submit the name of a former Airbnb lobbyist to fill an open Democratic slot on the Federal Trade Commission. According to a report in the Capitol Forum last month, Schumer was considering giving the job to David Hantman, a former Schumer staffer who led the government relations unit of Airbnb. The company also previously employed Schumer’s daughter.

Hantman was under consideration for the powerful post, the trade publication reported, even though Schumer’s fellow Democratic senators have asked the FTC to investigate whether Airbnb is harming consumers by driving up housing prices in cities throughout the country.

Weeks after the Capitol Forum report, IBT/MapLight asked Schumer’s office if the New York senator was planning to use that power to appoint Hantman to an open minority-party slot at the FTC.

In recent years, some Democratic appointees to the FTC have forged close ties with the industries they regulated. For instance, Jon Leibowitz, who had chaired the commission under President Obama, is now leading a telecommunications industry group that lobbied for the repeal of rules designed to prevent internet service providers from selling users’ browser histories and personal data.

Julie Brill, another Obama-appointed commissioner, last year left the FTC for a job at a Washington law firm where she specializes in antitrust policy. She told the Wall Street Journal she would “help companies and other stakeholders navigate an increasingly complicated regulatory landscape.”

Schumer’s potential power to influence minority-party nominees could have particularly serious implications for Silicon Valley, which has faced scrutiny -- and sanctions -- from the FTC. Amid some calls for tougher FTC regulation of the industry, Schumer received $237,000 from the tech sector -- more money than any other senator running for reelection in 2016, according to data compiled by the nonpartisan Center for Responsive Politics.

In the specific case of Airbnb, Schumer and Trump’s nominees to the FTC could determine how much -- or whether -- to scrutinize online home-rental platforms.

In 2015, Hantman participated in an FTC workshop on the “sharing economy,” and asserted that the agency did not need to take a tougher regulatory posture. Airbnb, he said, has lessened the “need for strong government intervention.” He also disputed the notion -- backed up by studies, including one funded by the company -- that Airbnb is driving up housing prices and rents in cities across the country.

“We would not want to be a company that drives up rent or decreases supply,” he told federal regulators. “We've commissioned studies. We've looked into this issue at length. It's pretty clear we don't have that impact, certainly not a significant impact, if any.”

A year after Hantman’s FTC remarks, Democratic senators Elizabeth Warren, Brian Schatz and Dianne Feinstein (also a former Hantman employer) sent a letter to the FTC asking the agency to evaluate the situation.

“We are concerned that that short-term rentals may be exacerbating housing shortages and driving up the cost of housing in our communities,” wrote the lawmakers. “We need reliable data on the commercial use of online platforms. We believe the FTC is best positioned to address this data gap in an unbiased manner and we urge the Commission to conduct a review of commercial operators on short-term rental platforms.”