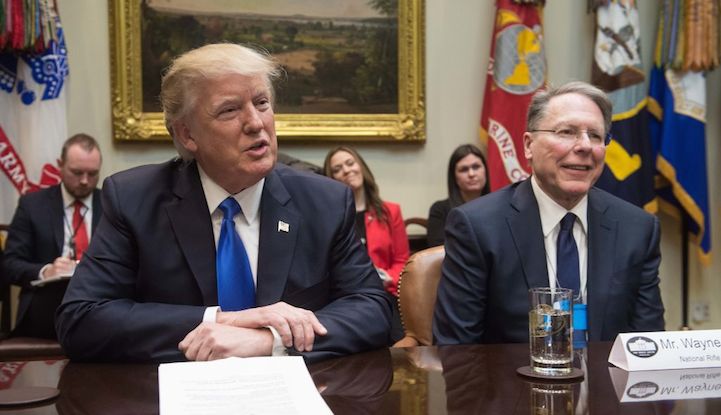 President Donald Trump speaks at the White House in February of 2017 during a meeting with leaders of conservative groups, including Wayne LaPierre, executive vice president of the National Rifle Association.
Photo by Nicholas Kamm / Getty Images.

The Trump adviser, Leonard Leo, is the executive vice president at the Federalist Society, the influential conservative lawyers network in Washington, D.C. Leo has served as Trump’s judicial adviser and successfully shepherded both Gorsuch and Supreme Court Justice Brett Kavanaugh through their confirmations.

America Engaged, a Virginia nonprofit formed in 2016, is the latest dark money organization to spring up in the Federalist Society’s orbit since Trump was elected. Tax documents obtained by MapLight show Leo is the group’s president. While America Engaged has received scant attention, records show it donated $950,000 to the NRA’s Institute for Legislative Action in 2017, as well as $700,000 to Freedom Partners Chamber of Commerce, the “secret bank” for billionaire libertarian activist Charles Koch.

The NRA’s Institute for Legislative Action announced in March 2017 that it would spend at least $1 million on television ads pressuring conservative Democrats to support Gorsuch. Freedom Partners released an online video touting Gorsuch’s qualifications and urging the Senate to confirm him. Concerned Veterans for America, another organization in the Koch network, made more than 500,000 phone calls and distributed direct mail in support of Gorsuch, according to the Washington Post.

In the past few years, Leo has been tied to the BH Group, a Virginia LLC that donated $1 million in anonymous cash to the Trump inaugural committee. Leo is also the president of the BH Fund, a nonprofit that was granted influence over academic matters at George Mason University’s law school as part of a large, anonymous donation to the school. The BH Fund donated $2.3 million to America Engaged in 2017, accounting for all but $100 of the money America Engaged raised.

The driving force for Trump’s two high court confirmations was the Judicial Crisis Network, a dark money organization that Leo effectively controls, according to the Daily Beast. JCN claims it spent $10 million to promote Gorsuch. The network contributed $1 million to the NRA between July 2016 and June 2017.

“It's striking to see the abrupt change in course Leo seems to have taken when Trump was elected,” said Robert Maguire, the research director at Citizens for Responsibility and Ethics in Washington who was the first to discover Leo’s role in driving anonymous money to the Trump inaugural committee.

“Just a few years ago, [Leo] was generally only known within small, conservative legal circles for his work at the Federalist Society and for being able to rally dark money donors to fund conservative legal battles -- mostly without his or the donors' names on it,” Maguire said. “Now, two years into the Trump presidency, he's been tied to a small, new set of new dark money groups with millions of dollars and a completely anonymous $1 million contribution to Trump's inauguration, all while being put in the driver's seat of Trump's judicial nomination process.”