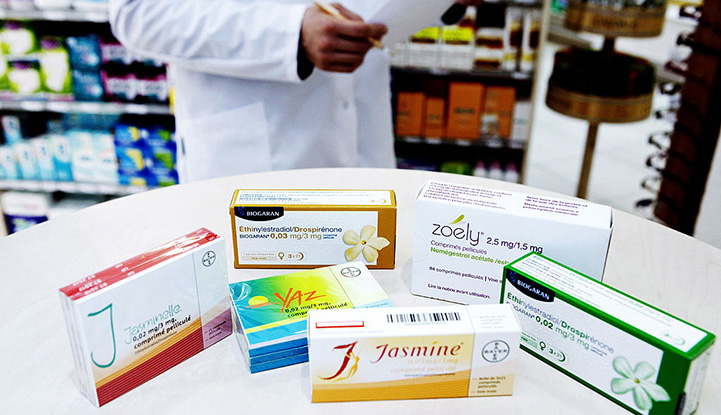 Through their own political action committees, the six firms provided a combined $1.9 million in direct support to GOP House and Senate candidates during the 2015-2016 election cycle, while they gave $1.2 million to Democratic candidates.

The drug companies also contributed at least $562,500 to the U.S. Chamber of Commerce in 2015. The Chamber, the principal lobbying group for businesses in Washington, spent $29 million over the 2016 cycle to boost Republican Senate and House candidates, many of them staunch conservatives who vowed to defund Planned Parenthood and support Supreme Court nominees willing to overturn Roe v. Wade.

The top manufacturers of contraceptive pills and devices are among the world’s biggest drug companies. They have many interests before Congress, and their product lines include drugs that generate more revenue than birth control. While the firms may publicly support expanding access to birth control, the fight over Planned Parenthood funding may take a back seat to other company priorities, such as corporate tax reform or speeding up the drug approval process.

For example, Pfizer, the world’s top pharmaceutical firm by revenue, manufactures contraceptive pills and pills that can be used for abortions. But its biggest sellers are a vaccine to treat pneumonia and drugs to treat rheumatoid arthritis and fibromyalgia.

Pfizer has promoted efforts to expand access to injectable contraceptives in developing countries. But in the last six years, the company’s political action committee has also donated to 24 of the 27 Republican Senators who have co-sponsored current legislation to defund Planned Parenthood. In 2016, roughly 62 percent of the $1.1 million Pfizer’s political action committee donated to House and Senate campaigns went to Republicans.

A Pfizer spokesperson, Sharon Castillo, told MapLight: “We support organizations as well as elected officials and candidates on both sides of the aisle based solely on two guiding principles: their efforts to improve incentives for innovation and expand access to medicines and vaccines for the patients we serve.”

Merck, the fourth largest drug company by revenue, manufactures NuvaRing contraceptive rings and Implanon contraceptive implants. On its website, Merck pledges it “will continue to support efforts to accelerate access to our products and ensure that reproductive health and rights are included in global, regional and country strategies.” Like Pfizer, Merck’s political action committee favored GOP House and Senate candidates in 2016, sending $354,000 to Republicans and $212,000 to Democrats.

“Our company is committed to participating constructively and responsibly in the political process, which includes providing support to the U.S. Chamber of Commerce and through the nonpartisan Merck political action committee (PAC),” Claire Gillespie, a Merck spokesperson, said in a statement. “The PAC supports legislators from both major parties who understand and appreciate the work we do to discover and develop medicines and to make them available to the patients who need them.”

“We believe that access to modern contraceptives is an important aspect of family planning and we partner with organizations and support projects that work to increase women’s access to health services, reduce maternal mortality, increase awareness of reproductive/sexual health among adolescents and vulnerable populations, prevent mother-to-child transmission of HIV/AIDS, and promote women’s empowerment and access to economic opportunities,” she said.

Allergan, whose top-selling drug is the wrinkle-remover Botox, makes contraceptive pills and intrauterine devices (IUDs). “Let's help knock down the barriers to IUD use,” says a website for Liletta, an IUD manufactured by Allergan. In the 2016 cycle, 84 percent of the donations made by the company’s political action committees went to Republican House and Senate candidates.

Pfizer, Merck and Allergan are all U.S. Chamber of Commerce members. Other contraceptive manufacturers that belong to the Chamber include Johnson & Johnson, Abbott Laboratories and Mylan.

Health insurers Anthem, Aetna and Cigna, which offer birth control to female enrollees without co-payments, are also Chamber members. Under the Affordable Care Act, signed by President Barack Obama in 2010, most health insurance plans are required to include birth control coverage.

In the 2016 election cycle, the Chamber’s independent spending exclusively aided GOP candidates for the first time. The vast majority of its 2014 spending also favored Republicans. Over the past two election cycles, the group has backed many Republicans who oppose Planned Parenthood.

In 2014, for instance, the Chamber spent $3.1 million to help elect Sen. Joni Ernst (R-Iowa). Ernst recently introduced legislation to end federal funding for Planned Parenthood and allow states to defund the organization. Sen. Marco Rubio (R-Fla.), an initial co-sponsor on Ernst’s bill, benefited from $1.5 million in spending by the Chamber against his opponent during his 2016 reelection race.

“The Chamber has never taken a position on Planned Parenthood or abortion, nor do those issues play any role in which candidates we support,” Blair Holmes, a Chamber spokesperson, told MapLight. “Our focus is growing the economy and creating jobs through sound policy."

Bruce Freed, who leads the Center for Political Accountability, said that companies “need to know how their money is being used and ensure that it’s not in conflict with their values, their policies and their business.”

“This type of consistency is important,” said Freed, whose group tracks corporations’ policies on disclosing their political spending and trade association memberships. “Conflicts can pose serious risks for the companies.”

In 2015, CVS Health announced it was ending its membership with the Chamber because the organization had lobbied against anti-smoking regulations in foreign countries. A spokesperson for CVS, which decided to stop selling tobacco in 2014, said the company was leaving the Chamber because “CVS Health’s purpose is to help people on their path to better health, and we fundamentally believe tobacco use is in direct conflict with this purpose."

Congress passed a law in 1976 prohibiting federal dollars from being used for abortions. Lawmakers later added exceptions for cases involving rape, incest, or threats to a mother’s life.

Planned Parenthood receives federal money for providing a wide range of health care services other than abortion. The organization says those services, which range from cancer screening to contraception, make up 97 percent of the care it delivers.

Planned Parenthood says it could lose up to 40 percent of its funding if Congress were to defund the organization. Many of Planned Parenthood’s patients could lose access to health care, according to a Guttmacher Institute study published last month.

According to Planned Parenthood, a majority of its 2.5 million U.S. patients receive services either through Medicaid, the federal-state health insurance program for the poor and disabled, or Title X, a federally funded program for reproductive services that was launched by President Richard Nixon in 1970.

Planned Parenthood’s president, Cecile Richards, recently told Buzzfeed that the organization won’t be able to provide services to all of the women it treats through donations alone. Planned Parenthood did not respond to questions from MapLight.

A 2016 study published in the New England Journal of Medicine found that after Texas barred clinics affiliated with abortion providers from participating in its Women's Health Program, claims for injectable contraceptives declined by 31 percent. Birth rates rose 27 percent among low-income women in counties with Planned Parenthood affiliates who were using contraceptive injections, according to the study.

In September, the Obstetrics & Gynecology journal published a study that found the maternal mortality rate in Texas more than doubled between 2010 and 2014. The study cited changes to state reproductive health laws as a possible factor in the spike, but said they were not likely the only cause.

MapLight analysis of campaign contributions to the principal campaign committees of federal candidates for the 2016 election cycle. All numbers are based on latest data made available by the Federal Election Commission as of February 9, 2017.