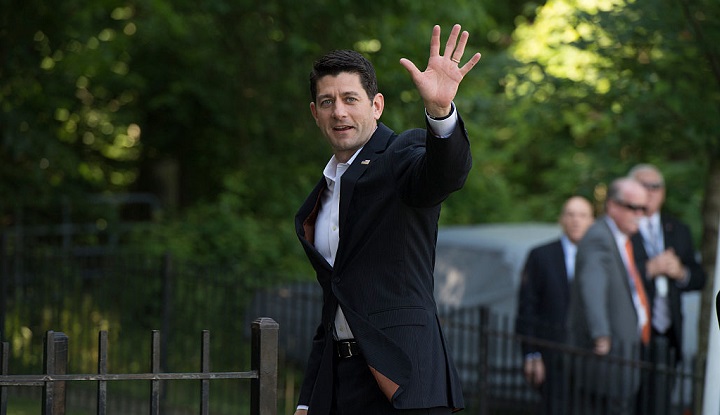 Speaker Paul D. Ryan, arrives for a news conference in Washington, D.C. in June, 2016. Ryan has received more money from corporate PACs than any member of Congress since January, 2017.
Photo By Tom Williams/CQ Roll Call.

Members of Congress have raked in more than $120 million from corporate political action committees since January 2017. Almost two-thirds has gone to Republicans, according to a MapLight analysis of campaign finance data.

Corporate PACs are generally funded by the corporation’s employees -- who may be asked to contribute or even encouraged to do so by their employer.  According to data compiled by the Center for Responsive Politics, Northrop Grumman ($2.3 million), AT&T ($2 million), and the National Beer Wholesalers Association ($2 million) are the top PAC contributors to federal candidates for the 2018 election.

Under federal law, contributions from individuals to PACs are capped at $5,000.  Contributions from PACs to candidates are capped at $10,000 ($5,000 each for the primary and the general election).  Corporations cannot contribute directly to candidates or to a PAC, but since the Supreme Court’s 2010 Citizens United ruling, they can contribute unlimited amounts to outside groups -- like super PACs or secretive, dark money nonprofits.

With Americans increasingly frustrated by the influence of money in politics, a growing number of candidates have sworn off contributions from corporate PACs.  According to End Citizens United, a political action committee that fights special interest money in politics, about 70 candidates have pledged not to take contributions from corporate PACs heading into the 2018 election.

Explore the charts below to see the top recipients of money from corporate PACs in Congress.  View interactive data here for the Senate and here for the House of Representatives.

MapLight is planning to publish an additional table outlining contributions from corporate PACs to all federal candidates in late June of 2018.

Contributions from corporate PACs to federal candidate committees during the 2018 election cycle. Data retrieved from the Federal Election Commission as of June 3, 2018.