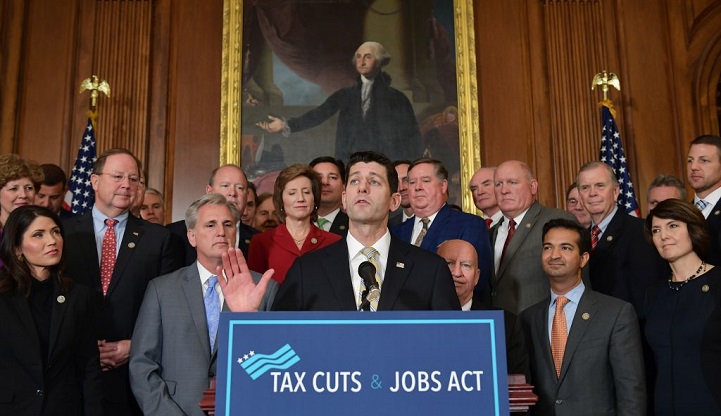 A nonprofit trade association whose members include some of the largest corporations in the nation increased its political donations by more than 18,000 percent in 2017, including a $6 million contribution to a dark money organization with ties to former House Speaker Paul Ryan.

The contribution by the Business Roundtable occurred as its primary beneficiary, the American Action Network, was spending at least $28 million to push for passage of the most favorable tax legislation for corporations in a generation. The roundtable, which gave $39,500 in grants during the 2016 tax year, contributed more than $7.2 million in 2017, according to tax records obtained by MapLight.

The splurge on the Republican-sponsored bill, which cut taxes by $1.5 trillion, underscores the disparity in benefits for corporate and individual taxpayers. In the year since the overhaul passed, corporations have announced plans to repurchase $1 trillion in stock. Workers, meanwhile, have gained an average of 2 cents per hour from the measure.

The discrepancy didn’t stop Ryan, who announced his retirement from Congress last year, from hailing the legislation as a windfall for America’s beleaguered middle class. In a tweet shortly after the bill passed, the Wisconsin Republican cited an anecdote about a public school secretary whose weekly wages increased $1.50 as a result of the tax cut -- enough for an annual membership at a discount bulk goods store. (Ryan later deleted the tweet.)

The American Action Network highlighted the roundtable’s praise for the tax bill when it passed the House. The trade association said the legislation would move the nation “one step closer to a modern system that will help U.S. businesses compete globally, invest and create jobs here in the United States.”

The American Action Network, created in 2009 by former Sen. Norm Coleman, R-Minn., and GOP operative Fred Malek, is one of the most active dark money organizations in the nation.

The AAN spent roughly $28 million to support the tax overhaul, claiming that it was “carrying out grassroots organizing at town halls to build momentum for a tax system that lowers rates and prioritizes working families and jobs creators.” More than half of the nonprofit’s $41.9 million in revenue came from a single, anonymous $24.6 million donation, according to AAN’s latest tax return.

Despite the nonprofit’s efforts, the tax changes haven’t been popular. An August poll by Fox News, a reliable supporter of the Republican White House, found only 40 percent of registered voters had a favorable view of the law.

The changes, however, were a boon to large corporations, which have dedicated much of their savings to stock repurchases. The buybacks reward company investors by increasing the value of existing shares, as well as boosting the compensation of executives whose salaries often are tied to stock prices. Jamie Dimon, chief executive of JPMorgan Chase and chairman of the roundtable, received $23 million of his $29.5 million in 2018 salary in stock options, according to a filing with the Securities and Exchange Commission.

The tax legislation represented “critical reform that will grow the economy, raise wages for American workers and boost business investment and hiring in the United States,” Dimon said in a statement released by the roundtable.