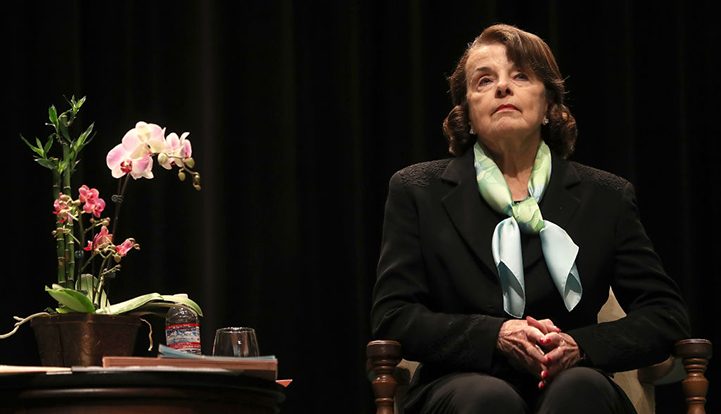 This article was produced by MapLight in partnership with International Business Times.

May 2, 2017 - Sen. Dianne Feinstein recently told her constituents at a San Francisco town hall event that she’s not ready to support a single-payer health care system -- an idea that has been gaining steam at the state level in California.

"If single-payer health care is going to mean complete takeover by the government of all health care,” the California Democrat said, “I am not there.”

A week later, Feinstein was even further from there, benefitting from a fundraising event at the Washington, D.C., office of Avenue Solutions, a lobbying firm that represents major health insurers, pharmaceutical companies and the primary trade association for doctors. The industries have historically opposed efforts to create a universal, government-run health care system -- an idea supported by 58 percent of U.S. adults. Feinstein supporters at the event were expected to kick in $1,000 to $5,000 for her re-election bid.

A Feinstein spokesperson did not respond to MapLight’s request for comment.

As Feinstein gears up to run for a fifth full Senate term, lawmakers in her home state of California are weighing legislation to establish a state-run, single-payer health care program. Labor unions and progressive advocacy groups are backing the bill. Hundreds of supporters marched to the Capitol in Sacramento last week as the measure advanced through a state Senate committee. More than 40 organizations, including health insurers and medical providers, are opposing the bill.

At the same time, national Democrats are facing increased pressure to support a single-payer health care plan from allies of Sen. Bernie Sanders, a Vermont independent. The party is also being urged by progressives to reject support from lobbyists and business interests. Since Feinstein began her fourth full term in 2013, lobbyists and political action committees have given at least $592,000 to her campaign, more than one-third of what she’s raised in donations, according to a MapLight review of campaign finance data.

Feinstein’s campaign committee received $655,822 in donations between January and March. Lobbyists accounted for at least $20,700; political action committees gave more than $160,000. Her campaign saw substantial support from the healthcare industry during that time.

The California Democrat raised almost $10 million during her last re-election campaign in 2012.  The lobbying industry was her fifth-largest source of campaign revenue, according to data compiled by the Center for Responsive Politics; it accounted for almost $325,000 of her fundraising during the contest. Feinstein won re-election in a landslide with 62.5 percent of the vote. Her GOP opponent, autism advocate Elizabeth Emken, raised $914,350, or less than $1 for every $10 given to Feinstein.