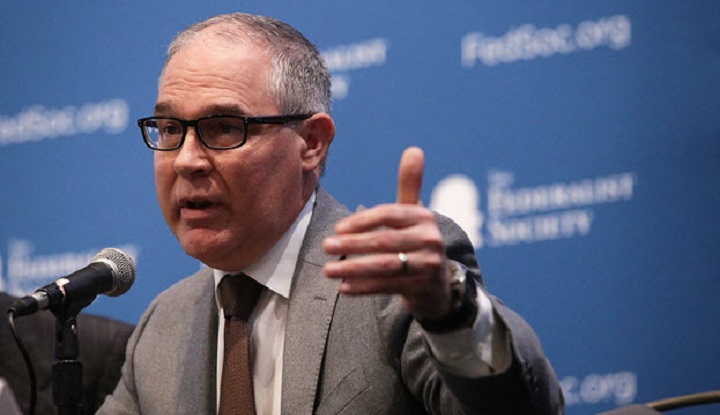 As an Oklahoma politician, Environmental Protection Agency Administrator Scott Pruitt received $181,000 in political contributions from donors who lobbied the EPA last year, according to a MapLight review.

The donors include lobbyist J. Steven Hart and his wife, who have attracted attention for renting a townhouse to Pruitt -- even as Hart's firm, Williams & Jensen, has lobbied to relax the EPA’s regulation of greenhouse gas regulations. Hart and his wife donated $4,366 to Pruitt’s campaigns for Oklahoma attorney general and his federal leadership PAC.

A handful of companies lobbying Pruitt’s EPA have also been major donors to the Republican Attorneys General Association (RAGA), which Pruitt chaired for two years as Oklahoma attorney general. At least one organization that lobbied the EPA last year donated to RAGA’s nonprofit policy arm, the Rule of Law Defense Fund, while Pruitt served on its board of directors.

"It's no secret that Pruitt's long been a friend of the oil and gas industry," said Brendan Fischer, a lawyer at the nonpartisan Campaign Legal Center in Washington, D.C. "You can see many corporate interests seeing it as beneficial to make an investment in promising, young, industry-friendly politicians like Scott Pruitt and then expect a payoff down the line."

Devon Energy, an Oklahoma City-based energy company, and its employees donated $15,600 to Pruitt's 2010 and 2014 campaigns for attorney general, as well as $10,000 to federal political committees linked to Pruitt. In 2014, the company gave $125,000 to RAGA while Pruitt served on the organization’s executive committee.

Pruitt worked closely with Devon Energy as Oklahoma’s attorney general. In 2011, his office sent a letter to the EPA about the agency’s regulation of methane emissions that was written almost entirely by Devon Energy lawyers.

Last year, Devon Energy reported lobbying the EPA and the White House on “rules related to methane emissions.” In April 2017, the EPA announced it would postpone a rule requiring companies like Devon Energy to retrofit their equipment to prevent methane leaks from new oil and gas wells.

The American Coalition for Clean Coal Electricity (ACCCE), which represents electricity providers and coal producers, donated $388,550 to RAGA from 2014-16. Its employees gave $4,250 to Pruitt’s 2014 re-election campaign and his leadership PAC.

Last year, the coalition lobbied the EPA on a series of rules that the agency has moved to repeal, delay or rewrite under Pruitt’s leadership, including its Clean Power Plan, which would limit greenhouse gas emissions by power plants; its Effluent Limitations Guidelines, which would limit water pollution from power plants; and its Disposal of Coal Combustion Residuals rule, regulating how power plants dispose of toxic coal ash. Pruitt was a featured speaker at an ACCCE board meeting last summer.

An affiliate of Koch Industries, Koch Companies Public Sector, lobbied the Pruitt-led EPA and Congress on the Clean Power Plan, and the family’s billionaire donor network recently praised the EPA’s plan to repeal it, according to a document obtained by the Intercept.

MapLight analysis of federal lobbying disclosures for 2017 from the Senate and the Clerk of the U.S. House of Representatives, Oklahoma campaign contributions data compiled by the National Institute on Money in State Politics, and campaign finance records for two federal political committees connected to Pruitt from the Federal Election Commission -- Oklahoma Strong Leadership PAC and Liberty 2.0, a super PAC. Campaign contributions data include contributions made by lobbying organizations or their employees. Data retrieved on March 8 and March 13, 2018.