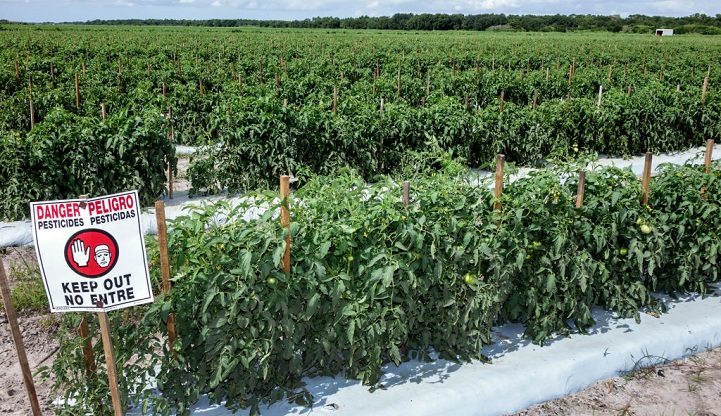 A danger sign warning of pesticides next to rows of tomato plants at a farm in Bradenton, Florida. .
Photo by: Jeffrey Greenberg/UIG via Getty Images.

Lawmakers who are sitting out a fight to ban a controversial pesticide linked to brain damage in children and farmworkers have received about 27 times more campaign cash from its primary manufacturer since 2017 than House members pushing for a prohibition on chlorpyrifos.

Ten of the 107 cosponsors of the Ban Toxic Pesticides Act of 2019 reported receiving $14,000 in campaign contributions since 2017 from the Midland, Mich.-based DowDuPont Inc. Federal Election Commission records show 118 of the 330 congressmen who haven’t sponsored the measure received $379,651 from Dow during the same period.

The disparity underscores the high stakes at issue in the long-running battle between environmentalists and Dow, a major corporate ally of the Trump administration that reported almost $86 billion in sales last year. Although the Environmental Protection Agency decided to ban chlorpyrifos for residential use in 2000 because of its potential danger to children, the remaining uses of the pesticide have been at the center of legal battles since 2007, when a coalition of farmworkers and environmentalists filed suit to ban it completely.

Rep. Nydia Velazquez, the New York Democrat who sponsored a similar measure during the last session of Congress, said it’s “unconscionable for EPA to turn a blind eye as children and workers are exposed to this poison. If the EPA won’t do its job when it comes to chlorpyrifos, then Congress needs to act -- and do so quickly.”

A companion bill has been introduced by Sen. Tom Udall, D-N.M.

Chlorpyrifos was developed by Dow and introduced to the U.S. market in 1965. The Obama administration proposed banning the pesticide in 2015, based on studies that suggested it had the potential to cause brain damage to young children and farmworkers who were exposed to small amounts. A U.S. Fish and Wildlife Service report completed in late 2017 but blocked by Trump administration officials found chlorpyrifos was among a trio of pesticides that were so toxic, they “would jeopardize the continued existence” of more than 1,200 plants and animals. The Trump administration reversed the ban in March 2017.

Since the EPA’s reversal, at least three states have unilaterally banned the pesticide: The Hawaii Legislature approved a ban in June 2018, the New York Legislature followed suit last month, and California officials announced plans on May 8 for a ban on its use in the nation’s biggest agricultural market, where the Natural Resources Defense Council estimates almost 20 percent of all domestic chlorpyrifos uses occur. Connecticut, Oregon, and New Jersey lawmakers also are considering state bans.

Meanwhile, a federal appeals court ordered EPA on April 19 to make a final decision on whether to ban the pesticide within 90 days; the Trump administration hasn’t announced plans to appeal, although a top EPA official said last week that its decision in July will “probably not completely resolve the agency’s standing on chlorpyrifos at this time.”

Rep. John Moolenaar, a Michigan Republican whose district includes Dow’s headquarters, received $50,050 from the corporation and its employees, far more than any other lawmaker. Moolenaar, a former Dow chemist, helped create the Congressional Chemistry Caucus. The lawmaker said in 2016 that he hoped the caucus “will be a good resource for getting the word out about different aspects of chemistry and the chemical industry, while also increasing the public’s understanding of chemistry and promoting the importance of STEM education.”

Rep. Lisa Blunt Rochester, a Democrat whose district includes DuPont facilities that are a major driver of the Delaware economy, received the second-largest amount of lawmakers who aren’t cosponsoring the legislation. She reported 11 contributions totaling $12,200 from the company and its employees.

Rep. Christopher Smith of New Jersey is the only Republican to cosponsor the measure. Smith hasn’t reported any contributions from Dow since 2017.