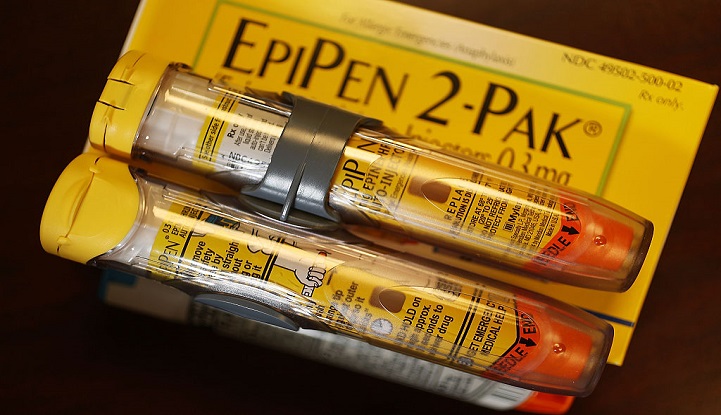 September 21, 2016 - When West Virginia Gov. Joe Manchin won a 2010 special election to replace the late Robert Byrd in the U.S. Senate, the company where his daughter worked as a top executive was the third-largest generic and specialty pharmaceutical company in the world.

The company, Mylan Pharmaceuticals, is still booming, but it’s struggling with a public relations nightmare. Within the last decade, Mylan has increased the price for EpiPens -- its life-saving, epinephrine-based allergy treatment -- from less than $100 to almost $610. The increased price, combined with a massive pay hike for Heather Bresch -- Manchin’s daughter and the company’s chief executive -- has prompted bipartisan outrage and hearings today before the House Oversight and Government Reform Committee.

Amid the ensuing furor, more attention has been paid to Mylan’s business tactics. Research from Wells Fargo found that the company, which is based in the Netherlands for tax purposes but has its main office in Pennsylvania, has raised prices on two dozen drugs by 20 percent or more since the start of this year; prices on another seven drugs have at least doubled.

Less attention has been paid to its political activity. Manchin has mostly kept quiet about the controversy, but he issued a low-key statement last month expressing hope that lawmakers can work to lower drug prices. There is no evidence that Manchin has actively sought to help his daughter’s company, or that his daughter has obtained preferential treatment from his office. But an examination of federal government records by MapLight show the interests of the senator and the drug company have frequently intersected:

There is little doubt that the last six years have been good to the company. As Manchin took office near the end of 2010, the Pennsylvania-based Mylan reported $5.5 billion in revenues, and its stock traded around $19.25 per share. Five years later, the company has moved its official headquarters to the Netherlands, taking advantage of a controversial tax dodge known as a corporate inversion to boost its stock price to roughly $40 per share. Its annual revenues last year topped $9.4 billion. Bresch, a former top lobbyist for Mylan, saw her annual compensation rise last year to $18.9 million, almost four times the $5.3 million she was paid in 2010, according to corporate filings.

It’s impossible to determine how much of Mylan’s increased fortunes have been due to stronger connections with Capitol Hill. The pharmaceutical business is part of the health care industry, a $3 trillion economic behemoth that consumes $1 of every $6 spent in the United States. The U.S. is responsible for more than one-third of the pharmaceutical industry’s $1.1 trillion in annual revenues. Business has boomed in particular as a result of the 2010 Affordable Care Act, which opened up a vast new market of previously uninsured patients to drug companies.

Because the industry is heavily regulated, pharmaceutical companies spend hundreds of millions lobbying the government each year. According to The Center for Responsive Politics, drug manufacturers have spent $2.3 billion over the past decade to press their case before government officials. Mylan alone spent $13.9 million during the past 10 years.

One of the company’s biggest legislative accomplishments came in 2012, when Bresch helped spearhead the push for a $6.4 billion, five-year reauthorization of user fees paid by the industry to the Food and Drug Administration to speed the review and approval of pharmaceuticals. The company was facing stiff competition from foreign generic drug manufacturers. The number of foreign-based businesses supporting the U.S. drug market had increased 185 percent, while FDA inspections of those businesses had dropped 57 percent. The legislation passed the Senate by a 96-1 vote, with support from Bresch’s father; only Sen. Bernie Sanders, a Vermont independent, was against it.

In 2013, the company’s lobbyists scored another bonus for Mylan, successfully advocating for legislation that would give priority federal grants to schools that trained personnel to use its epinephrine and kept a supply of the drug on their campuses. Among those pushing for the legislation was Gayle Manchin -- Bresch’s mother and Manchin’s wife -- who was heading the National Association of State Boards of Education. The legislation, along with Mylan’s overwhelming share of the epinephrine market, helped the company increase its revenues from the drug from about $200 million to more than $1.1 billion.

At the same time, Mylan lobbyists began a push for legislation that would require air carriers to keep epinephrine injectors aboard all 6,700 commercial aircraft. Eventually, Bresch said at a September 2015 conference, the company wanted lawmakers to help Mylan place its signature EpiPen product in “restaurants and hotels and really anywhere you are congregating.”

Mylan lobbyists worked Congress on at least two bills sponsored or co-sponsored by Manchin, according to Senate lobbying records. Bresch’s father was the author of the Safe Prescribing Act of 2013, an unsuccessful measure that would have reclassified hydrocodone – the active ingredient in an opioid-based painkiller distributed by Mylan – into the same drug category as oxycodone and fentanyl, two other pain drugs that have been frequently abused.

Manchin also cosponsored the Comprehensive Addiction and Recovery Act of 2016, which was signed by President Obama. The measure increased the availability of buprenorphine – also the active ingredient in a drug made by Mylan – to treat opioid addiction.

In terms of government contractors, Mylan has been an extremely small fish in a very big pond. The U.S. government spent $440 billion on goods and services during the 2015 budget year; Mylan received $886,100 in contract dollars, mostly from the U.S. Department of Veterans Affairs.

Government records show Mylan has only received about $14.4 million in tax dollars since 1980. But almost $5 million, or more than one-third of the total, flowed to the company since the beginning of 2014.

While the federal contracts may represent the greatest potential market for Mylan, the company has sought to sell its product at smaller governmental units. Although it’s made its EpiPen free to roughly 65,000 U.S. schools, the injectors have to be replaced annually. Mylan currently sells its product to schools at a discounted price of $112.10, though that price used to come with strings attached. Until recently, the company required schools to agree that they wouldn’t buy any competing products.

Manchin was his own biggest supporter in 2000 when he entered statewide politics, putting up $45,000 of his personal funds for his first campaign for West Virginia secretary of state. During his state campaigns, however, he would raise $7.1 million, with more than 95 percent coming from individual donors.

In Manchin’s decade in state office, lawyers and lobbyists accounted for more than $625,000 of his campaign contributions; donors from the health industry made up about $450,000, according to data compiled by the National Institute on Money in State Politics. Even so, Mylan employees and its political action committee gave $92,100 to Manchin’s campaigns between 2000 and 2010 -- more than any other company during the decade.

Company employees have upped the ante since then. Although Manchin has only run in two elections – the 2010 special election to replace Byrd, and a 2012 general election – Mylan’s employees have donated $96,500 to his campaign coffers. Manchin has received another $20,000 from the company’s political action committee.

Although Manchin doesn’t face reelection until 2018, the West Virginia senator came out early in support of former Secretary of State Hillary Clinton’s presidential campaign. Mylan has also given between $100,000 and $250,000 to the Clinton Foundation, according to the organization’s records. Clinton, for her part, has described the company’s price hike as “outrageous.”