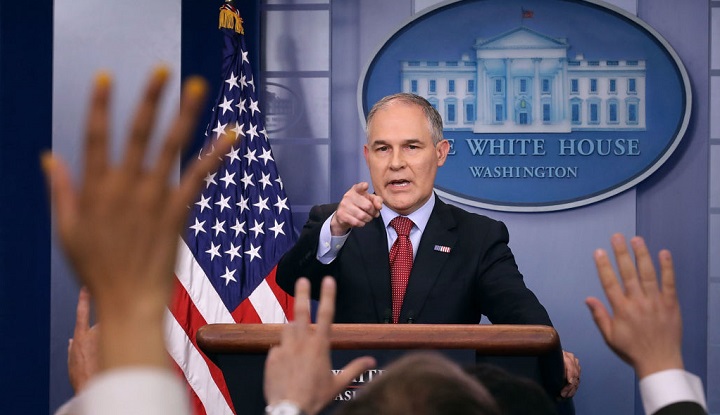 This story is a collaboration between MapLight and the International Business Times.

South Carolina’s top lawyer brokered a meeting between EPA Administrator Scott Pruitt and a top Canadian politician by copying invitation language suggested by an energy industry lobbyist, according to emails obtained by MapLight.

Attorney General Alan Wilson used the language to urge Pruitt to meet with retiring Saskatchewan Premier Brad Wall, who has been called a “prime advocate” of the province’s oil and gas industry. Pruitt, Wilson, and the lobbyist, David Wilkins, have ties to the Republican Attorneys General Association (RAGA).

“I have drafted an email request below for your convenience and information,” Wilkins wrote in a March email to Wilson. “Feel free to change it any way you want. I very much appreciate your help with this. It would be huge for my client to get this meeting.”

An hour later, Wilson copied the language, which noted Saskatchewan is the third-largest coal producer in Canada, the second-largest oil producer, and the third-largest natural gas producer. He emailed it to EPA Associate Administrator Samantha Dravis, a former senior RAGA official who now works as a policy adviser for Pruitt. Dravis quickly responded, “I will follow up by separate email to get this scheduled.”

The emails provide a rare view of the interactions between Pruitt’s EPA and his partners in conservative fights against federal regulations at a time when the agency is working to roll back environmental rules in secret. The records obtained by MapLight provide another example of the extraordinary coziness between Trump administration officials and lobbyists seeking favors for energy interests.

Pruitt and Wilson both have served as chairman of the GOP attorneys general organization, which has been bankrolled heavily during the last decade by conservative and energy interests attempting to block environmental regulations. Both men won election in 2010 and re-election in 2014. The two also apparently share an affinity for copying-and-pasting documents: While working as Oklahoma’s top lawyer, Pruitt was chided for sending letters to EPA regulators that were drafted by energy lobbyists.

Wilkins, a former speaker of the South Carolina House of Representatives, was tabbed as the U.S. ambassador to Canada by former President George W. Bush. Upon leaving Ottawa in 2009, he began lobbying congressional lawmakers on behalf of Saskatchewan and Canadian energy interests.

His firm, Nelson Mullins Riley & Scarborough, has been a major benefactor to RAGA, donating $15,000 to the organization last year and hosting its inauguration party in January. Wilkins made a $1,000 donation to Wilson in September; he and his firm have contributed at least $21,200 to Wilson’s campaigns since 2009.

The EPA and Wilkins did not respond to requests for comment. A spokesman for the South Carolina attorney general’s office said Wilson “just introduced two people who wanted to get together and talk about things.”

One week after sending the original email, Wilkins contacted the South Carolina attorney general again. “First and foremost, I want to thank you for all of your incredible efforts in arranging a meeting with Premier Wall and Administrator Pruitt,” he wrote. “It is greatly appreciated. Unfortunately, there is now some real urgency getting a meeting scheduled by Wednesday if [at] all possible.”

“Premier Wall contacted me over the weekend,” Wilkins continued. “He has been Premier of Saskatchewan for over ten years and he said last week was his toughest week politically since he has been in office due to a very difficult provincial budget. As a result of the political criticism his government is now facing, he said that unless we could schedule a meeting with a high level official like Administrator Pruitt he could not justify his trip to DC at this time. He would like to know if at all possible by Wednesday if he has a meeting.”

Wilson responded quickly. “Mr. Ambassador, I will look into it and get back to you as soon as possible,” he wrote.

“Really sorry to bother you with this,” Wilkins replied. “I fully understand you have more to do than work on my scheduling problems.”

Within a few hours, an EPA scheduler suggested a time to Wilkins. “My apologies for the delay in getting back to you. Would 2PM on April 4th work for you all?” she wrote.

Wilkins thanked Wilson: “You are the man!”

Pruitt met with Wall and Wilkins on April 4. “Saskatchewan is one of Canada’s main energy-producing provinces and an important ally on energy trading and protecting our global environment,” the EPA chief said in a press release.

Wilkins emailed Wilson to thank him for his help. “The meeting with Scott Pruitt Tuesday could not have gone better,” he wrote. “It was terrific. We both sang your praises. I cannot thank you enough. You really came through for me. That meeting really made the trip special for Premier Wall.”

A few days after the meeting with Pruitt, Wilson emailed Wilkins. “I am happy it worked out. Hope to see you soon sir,” he wrote.

“Thank you so very, very much,” Wilkins replied. “I got a nice note from Scott Pruitt today. All because of you.”

Thirty minutes later, Wilkins emailed the EPA scheduler with another request -- this time, on behalf of the Canadian Association of Petroleum Producers, for a meeting to discuss “the environmental regulatory rollback in the United States relating to the oil and gas sector.”

“Thank you for all of your hard work in facilitating the meeting last week between Administrator Pruitt and Premier Wall of Saskatchewan. We felt like it was an extremely productive meeting,” he wrote.

“Unfortunately, I have a request for another meeting with Administrator Pruitt for the first week of May. I assure you it will be my last request for a considerable amount of time,” Wilkins said. “I know how valuable the Administrator's time is and I don't want to wear out my welcome. But I believe this will be a meaningful meeting for all parties.”