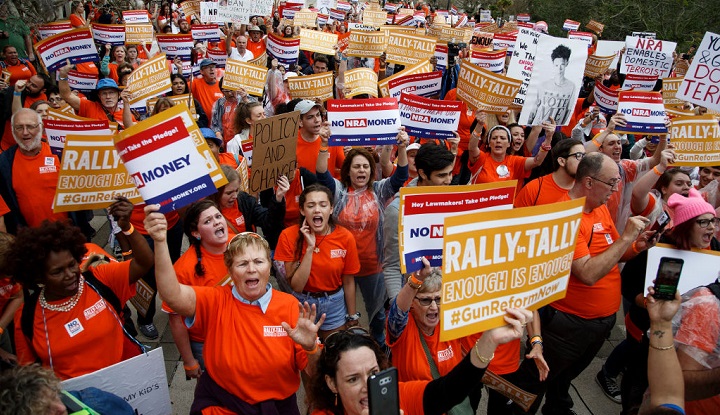 This story was produced by MapLight in partnership with the Florida Center for Investigative Reporting.

A few months before Florida Agriculture Commissioner Adam Putnam launched his Republican primary campaign for governor, his scheduler invited Marion Hammer, the National Rifle Association’s top lobbyist in the state, to meet with Putnam for coffee.

First, Hammer asked for the subject of the meeting. “Commissioner Putnam just hasn’t touched base with you in a while and would like to get together!” the scheduler wrote.

Told the meeting would be in Putnam’s office in the Capitol, Hammer didn’t appear happy and accused the scheduler of ignoring an email that evidently wasn’t sent. “Perhaps you didn't read my email,” she wrote. “I invited him to come to MY OFFICE. I am not going to be in the Capital. Go back and read my email.”

The emails illustrate the gun lobby’s enormous influence within the Florida Department of Agriculture & Consumer Services. The department’s commissioner is one of three statewide elected officials who serve in the Florida Cabinet and work with the governor to oversee state agencies. The department regulates the state’s produce and forestry industries, charities and telemarketers. It has also handled concealed weapon permits since 2002, thanks to lobbying by the NRA.

The emails were among hundreds of communications exchanged between Hammer and the department from 2014-17. MapLight requested the files in May; it received them two weeks after Putnam lost the Republican gubernatorial primary.

Asked about her unusual pull with Florida politicians, Hammer told MapLight: “There are 1.8 million concealed weapons and firearms license holders plus NRA's vast membership in Florida. I represent their interests and work to hold agencies accountable if they violate the law and abuse the rights of law-abiding Florida gun owners. Beyond that, that’s a question for you to ask others and for others to answer.”

The Department of Agriculture did not respond to MapLight’s request for comment.

Putnam, who has called himself a "proud NRA sellout," has been criticized for his ties to the gun advocacy group. The iconic grocery chain Publix announced in May it would suspend its political donations after an outcry over Putnam’s support of the gun lobby in the wake of the mass shooting that killed 17 people in February at Marjory Stoneman Douglas High School in Parkland, Fla.

Hammer was elected to the NRA’s board of directors in 1982 and served as its president from 1995-98. Earlier this year, the New Yorker detailed how her “unique influence over legislators has produced laws that dramatically alter long-held American norms.” One example is Florida’s landmark 2005 "Stand Your Ground" law, which allows citizens to respond to physical threats with lethal force before retreating.

The law gained notoriety in 2012 after George Zimmerman killed Trayvon Martin, an unarmed black teenager. Hammer had spearheaded efforts to pass Stand Your Ground, and she defended the law after the shooting. "This law is not about one incident,” she said. “It's about protecting the right of law-abiding people to protect themselves when they are attacked. There is absolutely nothing wrong with the law.

In early 2014, Hammer emailed Putnam to complain about the licensing division’s website. “Please accept this as a formal complaint on behalf of over a million concealed weapons and firearms licenses holders and perhaps the millions who do not have licenses because they could not find the information they needed on your website,” she wrote. “To state it simply, the Division of Licensing website SUCKS!”

But rather than receiving a pro forma email response, Putnam’s then-deputy commissioner pledged to address her issues with the website, adding that applicants often resolved website problems by calling the department. Hammer replied that his observation was “an insulting response to a legitimate complaint.”

“Why don't we schedule some time for me to come to your office and sit down in front of your computer and let me show you what's wrong with that site?” she wrote. The deputy commissioner quickly agreed to meet.

In 2015, Hammer emailed the department to complain about how long it was taking for people to get “fast track” concealed weapons applications approved. “I would appreciate some answers,” she wrote.

“From what I'm hearing it looks like about 45 to 50 days for mailed or ‘fast track’ applications once received by [the Department of Agriculture],” Hammer said. “Doesn't seem to matter how you apply, there doesn't seem to be much of a difference -- probably only fewer rejections for incomplete applications on the ‘Fast Track.’ BUT the term ‘fast track’ is now just a joke -- there's nothing fast about it -- it's only more convenient and costs more.”

“I know of no good reason that average processing should still be over a month,” she added.

Grea Bevis, who leads the licensing division, said he would have his staff compile numbers to address her concerns. “I will also be able to elaborate on our current plan to address our high volume and share this information upon my return on Monday,” he said.

That same year, emails show a legislative staffer consulted Hammer on an amendment to prevent people from setting up makeshift gun ranges in their backyards that might pose safety risks to neighbors. She said the language was a “fair approach to calming and clarifying the issue.”

When a Tampa Bay Times reporter wrote that the amendment had passed in the state House "despite loud opposition from the National Rifle Association," Hammer sent the article to a Department of Agriculture official. “What an idiot,” she said.

Hammer sent draft language to the agency that would have required the Department of Agriculture to issue a concealed weapons license within 90 days, even if it hasn’t located records showing that a person’s past criminal charges were dismissed or proof that an individual’s right to own a gun had been restored.

At Putnam’s request, Florida lawmakers proposed nearly identical language in a bill relating to the Department of Agriculture’s 2018 operations. Putnam announced he was withdrawing the proposal one day after the Parkland shooting. Hammer told MapLight that lawmakers should proceed with the change and that the Department of Agriculture is “not following the intent of the law.”

“I am entrusted with representing the interests of millions of Florida gun owners, hunters and sportsmen,” Hammer said. “I take my job seriously. Always have and always will. As such, I am as direct as possible with people with whom I interact on business matters because the folks I represent deserve the best representation possible.”

“I make no apologies for that,” she added. “None.”