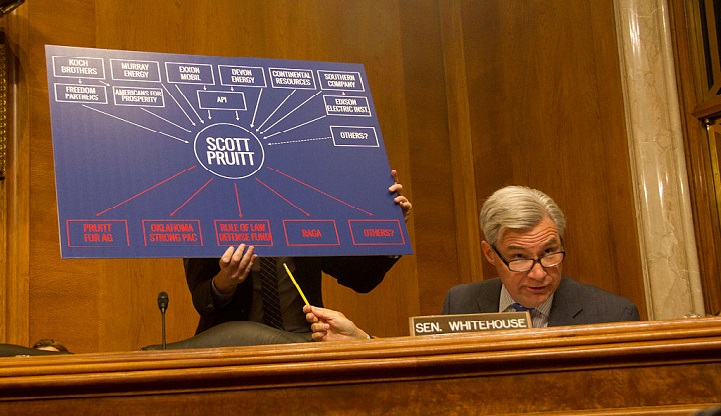 February 16, 2017 - President Donald Trump’s choice to lead the Environmental Protection Agency has received $352,946 in contributions from members of the energy and natural resources sector since 2001, according to a MapLight analysis of data from the National Institute of Money in State Politics.

The majority of Oklahoma Attorney General Scott Pruitt’s contributions from the energy sector in his campaigns came from the oil and gas industry, which donated $276,611. Donations from electric utilities, the next-highest donor group, totalled $42,385.

Almost 30 percent of contributions from the energy and natural resources sector came from companies that supported Pruitt via political action committees (PACs). More than 70 percent was from individuals who work in the industry.

The contributions underscore the close relationship Pruitt has with Oklahoma’s energy sector. A 2014 investigation by the New York Times found Pruitt was part of a coalition of conservative attorneys general working with energy companies to limit the EPA’s powers. The investigation also found that Pruitt had sent a letter to the EPA that was drafted by Devon Energy, one of the state’s biggest oil and gas companies. Devon’s PAC donated $5,000 to Pruitt for his successful bid for the attorney general’s chair in 2010 and another $5,000 for his 2014 re-election.

Pruitt also received $10,000 for the two campaigns from the Koch Industries PAC, linked to billionaire libertarian brothers Charles and David Koch. The Kochs have supported candidates skeptical of the scientifically accepted idea that climate change is caused by human activity.

The EPA nominee is known for attempting to limit the EPA’s power by frequently suing the agency. His office’s website claims Pruitt is a “leading advocate against the EPA’s activist agenda.”

A new political nonprofit, Protecting America Now, has been soliciting donations from corporate donors to support Pruitt’s nomination, saying that his confirmation is far from settled. The dark money organization, which doesn’t have to disclose its donors to the public, does not appear to have run any advertisements at this point.

The Pruitt nomination has been strongly opposed by environmental groups. The Sierra Club and the Environmental Defense Fund have run ads opposing Pruitt.

At least two Democrats are expected to vote for Pruitt. Susan Collins, a Republican from Maine, said earlier this week that she will not be supporting him.

A vote is expected Friday.

MapLight analysis of campaign contributions from PACs and employees to Scott Pruitt’s campaign committees since 2001, aggregated by sector and industry, as available from the National Institute of Money in State Politics as of February 15, 2016.