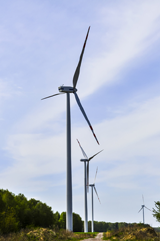 Exelon Corp., a utility company headquartered in Chicago, sent a letter to its employees urging them to ask their representatives not to extend the production tax credit (PTC) for wind power. Without action by Congress, the tax credit will expire at the end of 2012.

During the 2012 election cycle, Exelon and its employees contributed over $1 million to federal candidates.

Methodology: MapLight analysis of campaign contributions from Exelon and its employees to federal candidates during the 2012 election cycle. Data source: FEC.gov as of Dec. 9, 2012.