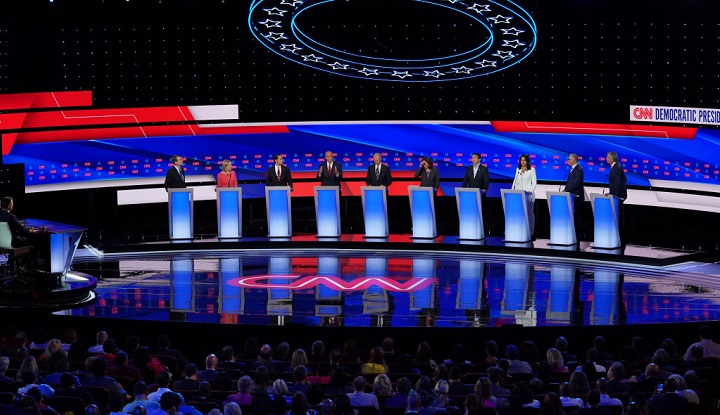 Hospital, drug, and insurance companies battling plans that would cut into their profits by providing health care for all Americans are spending money like it's 2009 again -- and using the same playbook to frame the debate.

Major health insurance, hospital, and pharmaceutical trade organizations that oppose Medicare for All have reported spending $45 million on lobbying so far this year. They've also pushed misleading attack lines against efforts to enact a universal public health care system that are likely to be echoed in the Thursday night debate of 2020 Democratic presidential hopefuls.

"When you talk about eliminating private health insurance, support flips, you get 58 percent opposed," ABC News anchor George Stephanopoulos told Sen. Bernie Sanders, a Vermont independent, in a June interview. "It gets even worse when you tell Americans they're going to have to pay more taxes, which you have conceded." He concluded: “It appears you're pushing something people say they don't want.”

Stephanopolous was referring to a Kaiser Family Foundation poll that tested arguments made by supporters and opponents of Medicare for All, but he only presented the polling for points made by opponents. It's true that only 37 percent of people said they'd favor Medicare for All if it eliminated private health insurance or required them to pay more taxes -- but 67 percent of people polled in the same survey said they'd support Medicare for All if it eliminated all health insurance premiums and reduced out-of-pocket costs.

Medicare for All would effectively eliminate private insurance. A single-payer program would allow the government to negotiate prices, cover the entire population, and reduce administrative costs. Americans pay more for drugs and common medical services and experience worse health outcomes than people in 10 other wealthy countries.

At the end of last year, more than 27 million Americans were uninsured, and millions more have insurance plans that leave them unable to afford medical care because of high deductibles, out-of-network charges, and co-payments. Additionally, Americans lose their existing health insurance plans when they turn 26, if they’re laid off or switch jobs, or if their employer decides to change plans.

Stephanopoulos’ questioning of Sanders was celebrated by the Partnership for America’s Health Care Future (PAHCF), a health care industry coalition created by health insurance, pharmaceutical, and hospital advocacy organizations to oppose Medicare for All. The group is spending $230,000 on television ads this month, according to OpenSecrets, and it ran ads during the previous Democratic debate on CNN claiming that people “don’t want to be forced into a one-size-fits-all government insurance system.”

Stephanopoulos will help moderate the third Democratic presidential debate Thursday on ABC News. ABC did not respond to questions from MapLight.

During CNN’s debate round in July, moderators asked numerous questions that utilized the health care industry’s preferred framing against Medicare for All.

Jake Tapper told Sanders: “You support Medicare for all, which would eventually take private health insurance away from more than 150 million Americans, in exchange for government-sponsored health care for everyone.”

Dana Bash offered Sen. Cory Booker, D-N.J., a similar prompt the next day. “You say you support Medicare for All,” she said. “You also say you are not going to pull private health insurance from more than 150 million Americans in exchange for a government plan, but that's what Medicare for All would do.”

Tapper also asked Sen. Elizabeth Warren, D-Mass., if she agreed with Sanders “on Medicare for All when it comes to raising taxes on middle-class Americans to pay for it?”

NBC anchor Savannah Guthrie posed a similar question to Sanders during the first debate round in June: “Will taxes go up for the middle class in a Sanders administration? And if so, how do you sell that to voters?”

Under Medicare for All, Americans would pay more in taxes instead of paying expensive monthly premiums to health insurance companies. Researchers have estimated that middle-income families who currently buy private health insurance would spend 14 percent less of their income than they do now. The Mercatus Center, a conservative think tank headquartered at George Mason University that has received funding from the libertarian Koch network, has estimated that Medicare for All would save the average person $6,000 over the next decade.

In June, the National Economic & Social Rights Initiative published a report explaining how the media and pollsters have adopted the health care industry’s “inherently biased” framing of the debate over Medicare for All as choices between “government health care” and “private health insurance.”

The report's author, Ben Palmquist, noted that public insurance programs like Medicare and Medicaid still leave most of the health-care system -- including hospitals, physician practices, and drug and medical device manufacturers -- in private hands. The plans are also often administered by private insurance companies.

“Rather than providing a balanced comparison of public and private health care (employing two symmetrically abstract terms) or government-run and corporate-run insurance (explicitly naming actors), the media and polling organizations are employing a linguistically and symbolically skewed comparison,” he wrote.

Debate moderators have frequently painted Democratic supporters of Medicare for All and other progressive policy proposals as radical. During CNN’s debate round, Tapper asked former Colorado Gov. John Hickenlooper if “Sanders is too extreme to beat President Trump.” He also asked Montana Gov. Steve Bullock “whether Democrats are moving too far to the left to win the White House,” noting that President Donald Trump won his state by 20 points in 2016.

Hickenlooper criticized the “notion that you're going to take private insurance away from 180 million Americans.” Earlier in the evening, Bullock said: “At the end of the day, I'm not going to support any plan that rips away quality health care from individuals.”

Bullock has been polling around zero percent, and is one of three of Democratic candidates opposed to Medicare for All who didn’t qualify for ABC’s debate on Thursday. Hickenlooper has dropped out of the presidential race and is now running for Senate in Colorado.

On Sunday, Stephanopoulos posed a familiar question to his “This Week” panel, which included former Chicago Mayor Rahm Emanuel: Is Warren “taking the Democrats out of the center?”

Emanuel claimed that Medicare for All would eliminate health care for 150 million people and called Democratic support for it "an untenable position for the general election." He also repeated a right-wing talking point that a single-payer system would "provide health care for people that have just come over the border."

Emanuel said he wasn't accosted by Medicare for All supporters on a recent bicycle trip through Michigan and Wisconsin.

“Nobody at a diner ran at me and said, ‘Take my health care away,’” he said.