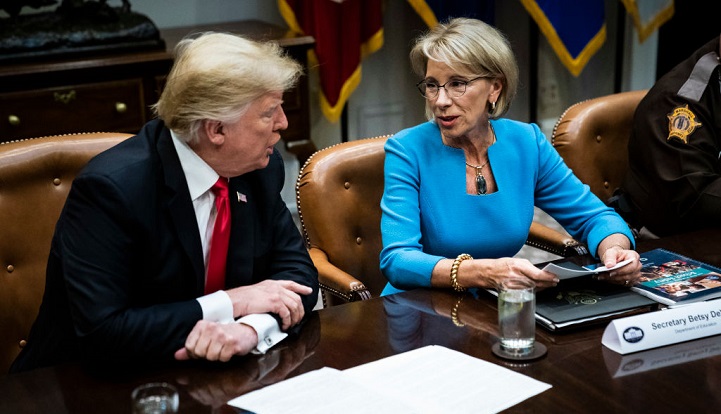 President Donald Trump speaks with Secretary of Education Betsy DeVos at the White House in December of 2018.
Photo by Jabin Botsford/The Washington Post via Getty Images.

A foundation funded by Education Secretary Betsy DeVos and her billionaire husband gave or pledged almost $3.2 million to conservative nonprofits during her first year in office, including gifts to politically oriented organizations that favor school choice, oppose abortion, and question the urgency in mitigating climate change.

And while the education chief has taken leave from her responsibility as president of the $65 million Dick and Betsy DeVos Family Foundation, she hasn’t withdrawn her financial support from it. DeVos and her husband added $5 million to the nonprofit’s coffers during 2017 to benefit charities located primarily in the couple’s home state of Michigan, according to tax records examined by MapLight.

The 2017 records show the family foundation made more than $9.1 million in gifts and grants to 141 organizations, as well as $10.4 million in pledges for future donations. The bulk of the DeVos money benefitted non-controversial charities, such as the Children’s Leukemia Foundation of Michigan and the West Michigan Horticultural Society.

At least nine conservative organizations, however, received significant funds from the DeVos foundation. Although she’s considered an essential bridge between conservative evangelical voters and the White House, the education secretary has become one of the most controversial Cabinet members because of her lack of teaching experience, outspoken support for private schools, and her billionaire family’s history of funding right-wing causes. She was confirmed only by a historic tie-breaking vote cast by Vice President Mike Pence.

During her tenure, DeVos has drawn criticism for suggesting that historically black universities were pioneers in the school choice movement; changing how sexual assault investigations are conducted on college campuses; slow-walking debt relief for defrauded students; and defending a Trump administration plan to cut federal funding for the Special Olympics.

Three organizations with ties to the family accounted for more than 90 percent of the DeVos foundation’s politically driven donations, according to IRS records. The American Enterprise Institute, a Washington, D.C.-based think tank, received a $750,00 grant and a pledge for an additional $250,000 during 2017. The research organization, whose board members include Dick DeVos, has opposed Obama-era net neutrality rules, argued against increasing the minimum wage, and urged Congress to support the Trump administration’s exit from the Paris climate accords.

The Washington, D.C.-based Alliance for School Choice also received $1 million in pledges and contributions from the DeVos family during 2017. DeVos stepped down as chair of the organization in late 2016 after being nominated to the education post. The nonprofit, whose board has also included Democratic presidential hopeful and New Jersey Sen. Cory Booker, has been scrutinized for its connections to the American Legislative Exchange Council (ALEC), a nonprofit conservative “bill mill” supported heavily by libertarian billionaire brothers Charles and David Koch.

Tax records show that the Alliance for School Choice, also known as the AFC Growth Fund, is controlled by another nonprofit, the American Federation for Children, which DeVos had also chaired. In early 2017, the Detroit News reported that the federation had invited supporters to attend DeVos’ confirmation hearing, and offered to pay their travel costs. While emails showed a federation staffer claiming she was contacting people "on behalf of Secretary of Education-designate Betsy DeVos," a spokesperson for the organization told the paper that the reference was an error and insisted that DeVos was not involved with the invites.

The federation has lobbied the Education Department throughout DeVos’ tenure at the agency, beginning during the first three months of 2017, on issues that included school choice and the Scholarships for Opportunity and Results (SOAR) Act, a $52.5 million program that’s the only source of federally funded vouchers for elementary and secondary schools in the nation.

The SOAR program was authorized in 2003 by the Bush administration, but funding was cut by former President Obama in 2009. A 2017 law provided tax dollars for the program, although it will require an annual appropriations vote to continue through 2022. DeVos told a Heritage Foundation audience in January that the program “has been a political football, in too many ways and for too many years.”

The DeVos family donated $300,000 and pledged another $600,000 to the Mackinac Center for Public Policy, a Midland, Mich.-based organization whose researchers have been outspoken opponents of efforts to mitigate climate change and union activity. Within hours of a June 2018 U.S. Supreme Court decision that struck down requirements that non-union members who benefit from collective bargaining had to pay union dues, the Mackinac Center -- whose board included Dick DeVos -- had launched a national campaign urging teachers to stop paying union dues.

When Rep. Donald Norcross, D-N.J., pressed DeVos last month about her family's support for the Mackinac Center and its anti-union effort, she responded: “Congressman, when I took this job, I resigned from anything and everything outside of this job.”

Other conservative beneficiaries of the DeVos family included: