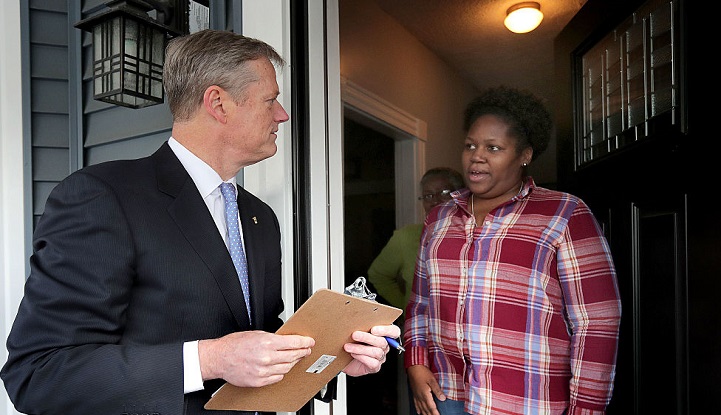 November 2, 2016 - After unions filed a formal complaint against financial firms whose executives have given money to support a Massachusetts charter school ballot measure, Gov. Charlie Baker, the initiative’s chief booster, sought to downplay the significance of those contributions.

“I wasn't aware of who gives or who doesn't give on this stuff,” the Republican governor told reporters Tuesday. He said the firms have been working with the Massachusetts pension board since “before our administration even took office.”

His comments were made in response to a complaint filed by teachers unions, following a report from International Business Times and MapLight which found that executives at eight financial firms with contracts to manage Massachusetts state pension money have donated at least $778,000 to committees supporting Question 2. The unions want federal regulators to investigate whether the contributions violate an anti-corruption rule.

The Securities and Exchange Commission’s 2011 “pay-to-play” rule is designed to prohibit financial firms that manage state pension assets from contributing to politicians who can influence state pension investment decisions. The law covers direct contributions to Baker’s own campaign, because the governor appoints trustees to the Massachusetts Pension Reserves Investment Management Board (MassPRIM).

While the rule doesn’t apply to ballot measure committees, the teachers unions say the Wall Street firms’ donations should be covered by the rule’s anti-circumvention provisions. They argue the contributions are being used to fund television ads for Question 2 that feature Baker, and could help him win reelection in 2018.

Baker said Tuesday that the firms identified by IBT/MapLight have done business with the state pension board for years. However, the SEC rule aims to restrict contributions from executives at firms currently managing state pension money — regardless of when the original state pension contract was signed. When they created the regulation, SEC officials noted that such contributions can influence whether pension overseers retain or cancel a firm’s existing pension investment contract.

Since Baker took office, MassPRIM has directed additional business to at least one of the financial firms whose executives have supported Question 2. A Berkshire Partners fund received a $175 million commitment from MassPRIM earlier this year, only months before executives at the firm donated $250,000 to Great Schools Massachusetts. That group is now running an ad featuring Baker and has spent nearly $12 million on television advertising, according to the Associated Press.

Teachers unions have expressed outrage that Wall Street firms are earning lucrative fees from their members’ retirement savings, and that their executives are then funding efforts to pass Question 2 — a measure the unions believe will harm public education in Massachusetts.

On Wednesday, the Boston Globe reported that Moody’s Investors Service has told some local officials that their cities’ bond ratings could be downgraded if the initiative passes.

The campaign against Question 2 received a boost Tuesday from Vermont Sen. Bernie Sanders, who unsuccessfully ran for the 2016 Democratic presidential nomination on a populist platform. Sanders warned the measure would hurt funding for public schools, according to the Associated Press.

‘‘Wall Street must not be allowed to hijack public education in Massachusetts,’’ Sanders said. ‘‘This is Wall Street’s attempt to line their own pockets while draining resources away from public education at the expense of low-income, special education students and English language learners.’’