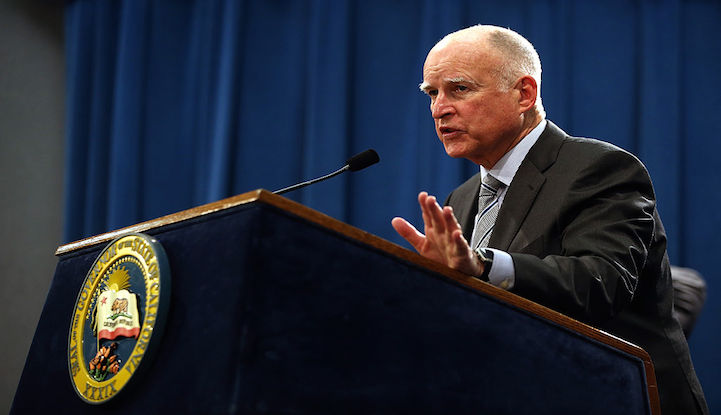 He is the author of Proposition 57, a measure aimed at reducing overcrowding in the state’s prisons, and his ballot measure committee has contributed over $4 million -- more than a third of the $11.5 million raised for the initiative, a MapLight analysis has found.

The Brown for Governor 2014 committee has also given $4.1 million to fight Proposition 53, a measure that would require voter approval for state projects requiring the sale of over $2 billion in revenue bonds. That money represents 35 percent of all contributions raised against the measure.

The votes on the two measures could affect the governor’s final years in office -- and his political legacy.

The vote on Prop. 57 will test support for his criminal justice reform plan. Brown has argued that the proposed reforms -- which include providing earlier parole opportunities for some nonviolent offenders and giving judges the authority to decide whether to try juveniles as adults -- are necessary for California to comply with a U.S. Supreme Court order to reduce prison overcrowding in the state. He has also said the measure will give inmates an incentive to change their lives and save taxpayers tens of millions of dollars.

Other backers of Prop. 57 include the California Democratic Party and billionaire Tom Steyer, a possible 2018 gubernatorial candidate, who have given $2 million and $1.5 million to committees supporting the measure, respectively.

Opponents of Prop. 57 have raised nearly $600,000, including $339,000 from law enforcement organizations and district attorney associations. The Los Angeles County Professional Peace Officers' Association has given the most money -- $150,000. The Association for Los Angeles Deputy Sheriffs has contributed $100,000. The California League of Cities also recently announced its opposition to the measure.

The governor wants to defeat Prop. 53 because the measure would make it more difficult to complete two of his signature projects -- a $64 billion high-speed rail line that would run from Sacramento to San Diego and his $17 billion proposal to build tunnels under the Sacramento-San Joaquin Delta that would make it easier to transfer water supplies to Southern California. The California Democratic Party has also contributed $1.3 million to defeat the initiative.

A Stockton farmer and his wife, Dean and Joan Cortopassi, have provided all of the financial support for Prop. 53 -- $4.8 million. They are staunch opponents of the Delta tunnels.

The governor, who cannot run for reelection in 2018 due to term limits, has endorsed Proposition 58, which would repeal a ban on bilingual education, and Proposition 67, which would uphold the state’s plastic bag ban.

Brown opposes Proposition 51, which would authorize $9 billion in bonds to improve or build new school facilities. Many of the governor’s fellow Democrats, including the California Democratic Party, back the measure.

The governor has not taken a public stance on Proposition 55, which would extend income tax increases on high-earners that voters approved in 2012. At the time, Brown campaigned hard for the increases, arguing they would help address the state’s budget crisis. But he sold them as temporary.

Four years ago, the battle over increasing the taxes generated well-financed opposition. This year, supporters of the tax extension have raised nearly $57 million, while opponents have raised only $3,000.

When asked about Prop. 55, Brown has tried to remain neutral, saying, “I’m leaving that to the people of California.”