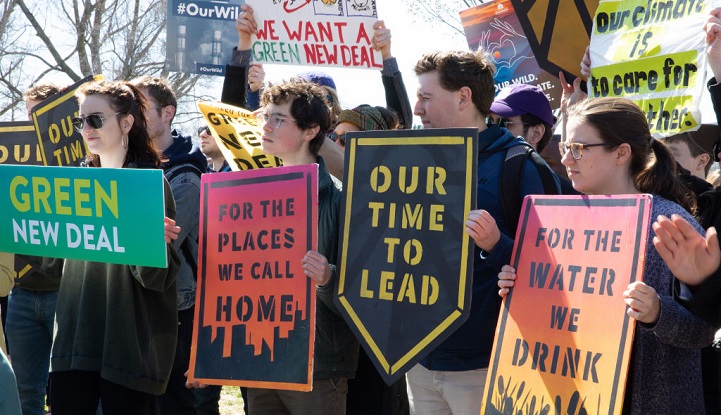 Washington, D.C to demand a vote to pass ' The Green New Deal' in March of 2019.
Photo by Aurora Samperio/NurPhoto via Getty Images.

The average congressional opponent of the Green New Deal has received 24 times more campaign cash from the nation’s largest oil and gas companies than sponsors of the climate change resolution, according to a MapLight analysis.

The resolution, introduced on Feb. 7 by Sen. Edward Markey, D-Mass., and Rep. Alexandria Ocasio-Cortez, D-N.Y., urges lawmakers to begin outlining the best options for reshaping the nation’s $20.7 trillion economy to mitigate climate change. Scientists believe humans have fewer than a dozen years to limit the production of greenhouse gases or to begin facing droughts, floods, extreme heat waves, and economic misery for millions of people.

The 90 House sponsors have received a total of $37,175 in campaign donations -- an average of $413 each -- from the 10 largest publicly traded U.S. oil and gas companies since 2017. Meanwhile, the 344 opponents of the resolution cumulatively received 91 times more money. The opponents, who include all 197 House Republicans and 145 Democrats, took almost $3.4 million from the energy companies, an average of $9,876 per lawmaker.

The donations highlight the existential stakes for the fossil fuel industry in the debate over the Green New Deal. One of the centerpieces of the broad measure calls upon Congress to curb the effects of climate change by creating a plan for a net carbon-neutral economy within the next decade.

The 10 companies, which have a combined market capitalization topping $900 billion, and their employees have given money to 235 current House members since 2017, with GOP members opposing the Green New Deal accounting for two-thirds of the recipients. House Minority Leader Kevin McCarthy, R-Calif., received the most of any lawmaker, reporting $90,350 in contributions from the energy giants. Nine of the 10 biggest recipients of campaign money from the oil and gas companies are Republicans.

ExxonMobil, the Irving, Texas-based descendant of the Standard Oil Co. that’s become the largest publicly traded energy company in the world, gave the most donations of any oil and gas company, contributing more than $848,000 to House members since 2017. Only $8,400 -- less than 1 percent -- of the ExxonMobil contributions went to Green New Deal sponsors.

The House hasn’t voted on the resolution yet, although Republican lawmakers are pushing for a vote in hopes of embarrassing the Democratic majority by painting the resolution as a job-killing exercise in Stalinesque socialism that will make hamburgers and pickup trucks illegal. Despite the Republican attacks, a February Wall Street Journal poll found almost two-thirds of American adults believe the GOP’s position on climate change is outside the mainstream.

A similar tactic last week by Senate Majority Leader Mitch McConnell, R-Ky., resulted in a 57-0 vote against the resolution. Three Democrats and Sen. Angus King, I-Me., voted with the Senate’s 53 Republicans. The remaining Democrats voted “present” to avoid highlighting differences within the party over the proposal, including six current senators who are running for the Democratic nomination for president and who are cosponsoring the resolution.