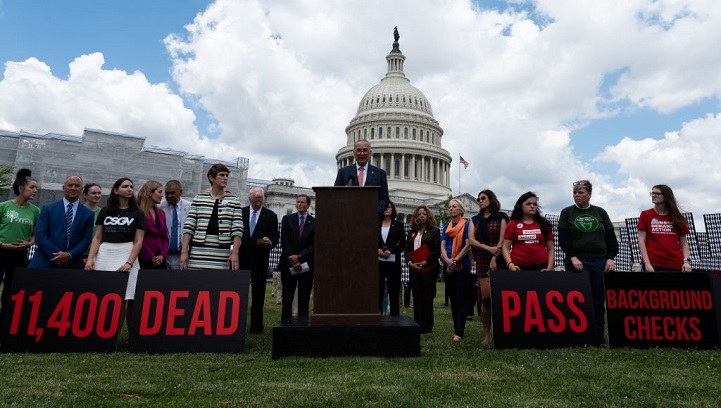 Senate Minority Leader Chuck Schumer (D-NY) speaks during an event in June of 2019 in Washington, D.C. urging the passage of a bill to expand background checks for gun purchases.
Photo by Michael Brochstein/SOPA Images/LightRocket via Getty Images.

Senators who haven’t agreed to back a measure to close loopholes in gun background checks have received 30 times more campaign cash from the industry and its supporters than the measure’s sponsors, according to a MapLight analysis.

The Bipartisan Background Checks Act, which passed the House by a 240-190 margin in February, would require private sellers to make sales through licensed gun dealers. The proposal, introduced in January by Sen. Christopher Murphy, D-Conn., is fiercely opposed by gun manufacturers and advocacy organizations, who have given more than $274,00 to senators since 2017. The National Rifle Association ($95,150), Safari Club International ($85,500), and the National Shooting Sports Foundation ($64,710) have been the largest contributors.

Despite the gun lobby’s opposition, surveys show most Americans support expanded background checks. A recent Quinnipiac University poll found 93 percent of voters support requiring background checks for all gun buyers, including 89 percent of Republicans and 87 percent of gun owners. A study published earlier this month in Pediatrics found fewer children are killed with guns in states with background checks that exceed the federal standard.

Although the House bill won eight GOP votes, it’s stalled in the Republican-controlled Senate. No hearings have been scheduled on the Murphy bill, which is cosponsored by 40 Democrats and one independent.

The lack of federal action has spurred several states to enact their own universal background check laws, with New Mexico becoming the twelfth state to pass a law in March. California extended background checks to the purchase of ammunition in July.