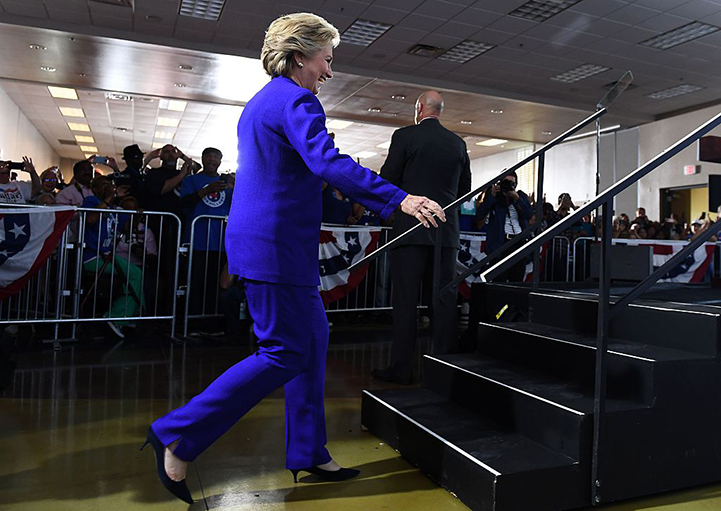 November 4, 2016 -- An early campaign memo to Hillary Clinton laid out the legal basis for plans to work directly with a super PAC called Correct the Record. The memo was sent days after the group proclaimed it would “be allowed to coordinate” with her campaign.

Under federal elections rules, super PACs are allowed to accept unlimited contributions on the condition that they operate independently of campaigns. Correct the Record, however, has asserted throughout the 2016 presidential race that it may work directly with Clinton’s team.

The group has said that because it is posting communications online for free, its work should therefore be exempt from Federal Election Commission (FEC) rules regarding “coordinated communications.” That argument has stunned advocates for campaign finance reform, who argue Correct the Record is violating the spirit -- and possibly the letter -- of federal election laws.

In a May 2015 memo released by Wikileaks this week, the Clinton campaign expressed confidence it could coordinate with the super PAC. The memo appears to have been authored by the campaign’s lawyer, Marc Elias. His firm, Perkins Coie, has also worked with Correct the Record and another super PAC backing Clinton.

“We wanted to lay out some ideas that we have discussed with your campaign or that have already been put into practice,” Elias says in the memo, which is addressed directly to Clinton. One of the items on the list: “Coordinated Rapid Response and Research Activities with Correct the Record.”

Elias notes that the news Correct the Record intended to coordinate with Clinton was not well received. “The press reaction to CTR’s announcement was largely negative, with campaign finance reform advocates and their allies in the media depicting this development as yet another example of groups bending the campaign finance rules,” he writes. “Part of this reaction appears to have been a misunderstanding of the applicable law and CTR’s organizational structure.”

Brendan Fischer, an associate counsel at the Campaign Legal Center, told MapLight that “the backlash against Correct the Record's coordination scheme was not a 'misunderstanding.' What Correct the Record is doing is illegal.” He called the super PAC’s work in support of Clinton a “brazen effort to undermine the campaign finance laws.”

The complaint notes that the super PAC has done more than share content online: its employees have conducted opposition research, trained surrogates, pitched stories to reporters and led “rapid response” efforts. These expenses may be “coordinated expenditures,” which would be prohibited in-kind contributions to her campaign, the Campaign Legal Center says.

Correct the Record did not respond to MapLight’s request for comment. The super PAC has previously dismissed the Campaign Legal Center’s complaint as “ridiculous.”

Clinton isn’t the only candidate this election cycle to test the boundaries between outside groups and campaigns. Former Florida Gov. Jeb Bush raised $100 million for a super PAC that backed him once he had formally announced his candidacy. His Republican primary opponent Carly Fiorina filmed an hour-long documentary with a super PAC before announcing her own candidacy, and the group’s staffers later helped with advance work at her campaign’s events.

The Campaign Legal Center has also filed an FEC complaint against Trump's campaign and two super PACs backing him.

Still, campaign finance experts say that Correct the Record’s relationship with the Clinton campaign is notable for its audacity. The super PAC has spent more than $8 million this election cycle, according to FEC records.

Hacked documents released by Wikileaks and others show numerous examples of the Clinton campaign planning to use Correct the Record to its advantage. U.S. intelligence officials have said the hacks were performed on behalf of the Russian government.

The Clinton campaign would not confirm the authenticity of the documents or respond to MapLight’s questions. In a statement, the campaign slammed her opponent, Trump, for questioning whether Russia is truly behind the hacks.

"The nominee of what was once the party of Reagan is taking Putin's denial of the hacking over the clear conclusions of the U.S. intelligence community, the Republican Chairman of the House Homeland Security Committee and even his own running mate,” said Glen Caplin, a Clinton spokesperson. “Donald Trump owes the American people answers on why he's coddling Putin and cheering on this interference in our democracy," he said.

David Brock, Correct the Record’s founder, recently told the Los Angeles Times that lawyers are currently researching how his group can remain active during a Clinton presidency.

“There will be plenty of work to do,” he told the paper.

About MapLight
MapLight is a 501(c)(3) nonprofit, nonpartisan research organization that tracks money in politics. More information about MapLight can be found here.