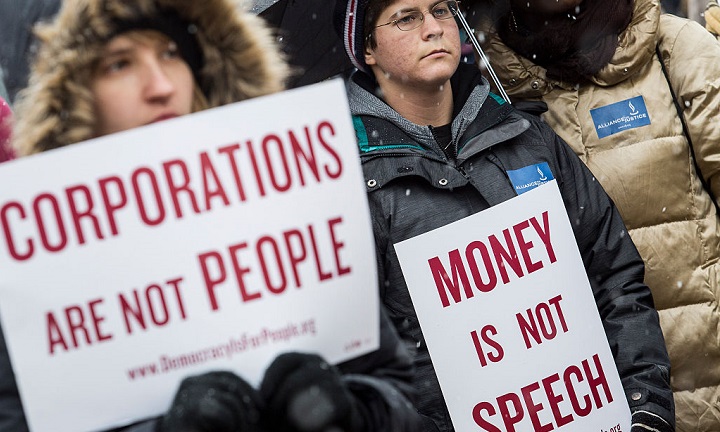 Activists call for an end to corporate money in politics to mark the fifth anniversary of the Supreme Court's Citizens United decision in Washington, D.C. in January of 2015.
Photo by Drew Angerer/Getty Images.

The nation’s largest health-care corporations gave at least $61 million directly to political campaigns, nonprofits, ballot initiatives, and trade associations during 2017, according to a MapLight analysis of newly released data.

The data underscore the political obstacles that advocates of health-care reform face. Virtually all of the 104 trade associations that received corporate funds from the health-care giants in 2017 oppose a larger role for the federal government in providing health insurance, even though a comfortable majority of Americans support a single-payer health-care system. Health-care reform advocates will likely continue to be outspent in the wake of Citizens United, the 2010 Supreme Court case that essentially gave the green light to corporations to flood political campaigns with unlimited amounts of money.

On top of the trade association contributions, health-care giants spent at least $11 million to influence ballot initiatives, and $6.6 million went to political nonprofit organizations. About $4.9 million was given directly to political candidates, and the remaining amount, almost $2.2 million, was given to “dark money” social welfare organizations.

While members of trade associations frequently disavow policies pursued by the organizations, the center’s data highlight areas that were of particular interest to the health-care corporations during 2017. Merck & Co., the Kenilworth, N.J.-based drug manufacturer, gave almost $13.1 million to political campaigns and trade associations during 2017. Almost 90 percent of its contributions were given directly to PhRMA, but Merck also made $381,050 in donations to 426 political candidates.

Corporate political spending in two of the nation’s largest states differed, however. The Merck contributions in California went directly to legislative candidates. Tom Daly, an Orange County Democrat who leads the Assembly’s insurance panel, received $3,500, the most of any California politician. In New York, Merck gave $16,000 to Democratic legislative campaign committees and $13,000 to GOP committees. New York Gov. Andrew Cuomo, a Democrat, received $5,000.

Amgen, Biogen, and Pfizer were also large corporate contributors to opponents of Ohio’s Issue 2, the most expensive ballot initiative in the state’s history. Along with Johnson & Johnson, the companies gave more than $10.7 million to defeat the proposal, which would have required state agencies to pay the same rate or less as the Veterans Administration for prescription drugs. The four companies accounted for almost one-fifth of the $58 million spent to defeat the initiative, which barely drew 20 percent of the vote.

A pro-Issue 2 organization asked the Ohio Elections Commission to investigate the PhRMA Ohio Initiative Fund for failing to register as a political action committee, calling it “a dark money laundering scheme to keep making obscene profits at the expense of sick and suffering patients.” The complaint was dismissed by the regulators.

Biogen also gave $240,000 in 2017 to an organization described as the “PhRMA California Ballot Initiative.” California voters defeated Proposition 61 in 2016, a measure that was similar to the Ohio initiative.

Other measures influenced by corporate cash included $100,000 from Cerner Corp., a Kansas City-based electronic health records company that boosted the successful effort to persuade voters to approve a $1.64 billion terminal at the Kansas City International Airport, and $30,000 contributions by Cigna and UnitedHealth Group to battle an unsuccessful attempt to create a universal health-care system in California.

Three health-care corporations accounted for almost half of all contributions given to 527 groups, or nonprofit organizations that are allowed to engage in political activity but required to disclose the identities of their donors. Anthem Inc., the Indianapolis-based health insurer, gave almost $1.6 million of its $5.5 million in political donations to the nonprofits. The Republican Governors Association (RGA) was the largest recipient, taking in $600,000 from the insurer. The Democratic Governors Association (DGA) received $425,000.

Anthem also gave $40,500 to four Colorado nonprofits. Almost 80 percent of Colorado voters cast ballots in 2016 opposing an unsuccessful initiative that would have created a universal health-care system for the state. It gave another $10,000 each to the California Vote Project, a Democratic voter registration initiative; California Trailblazers, an effort to groom Republican candidates for state positions; and Californians for High Quality and Affordable Health Care, a nonprofit sponsored by California health insurers.