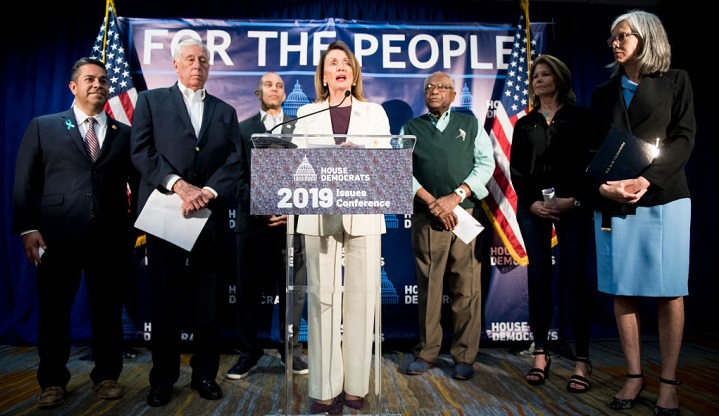 This story is a collaboration between Sludge, an investigative news website focused on money in politics, and MapLight, a nonpartisan research organization that tracks money’s influence on politics.

Corporate lobbyists collected more than $1 million for the Democratic Congressional Campaign Committee (DCCC) during the first quarter of 2019, according to an analysis by MapLight and Sludge.

The amounts have been rising gradually since the first of the year, with lobbyists bundling more than $580,000 for the committee in March—the month that the DCCC began drawing criticism from progressives for banning its political vendors from working for candidates who plan to challenge incumbent Democrats.

The DCCC has already raised more than $32 million overall—a record first-quarter haul for the committee, according to Illinois Rep. Cheri Bustos, a moderate Democrat who leads the campaign arm.

The committee’s seven corporate lobbyist bundlers and their firms represent health care and energy interests whose balance sheets are threatened by key progressive priorities like a “Medicare for All” health-care system and a “Green New Deal” to address climate change. So far, Democratic leaders have resisted both proposals.

The DCCC did not respond to questions from MapLight and Sludge.

Some of the lobbyists collecting checks for the DCCC represent companies and trade organizations that are members of the Partnership for America’s Health Care Future (PAHCF), a nonprofit “dark money” organization created to oppose Medicare for All and other progressive proposals to reshape the nation’s health care system.

Since 2009, the DCCC has received almost $1.3 million in direct contributions from employees and political action committees for companies and organizations that are part of PAHCF. Sludge and MapLight found that the DCCC’s 2019 bundlers and their lobbying firms have represented at least 12 PAHCF members.

A PAHCF spokesperson said that the organization “is not involved with fundraising for the DCCC or House Democrats.”

Chip Kahn is the chief executive and president of the Federation of American Hospitals, one of the coalition’s members. In February, Kahn took credit for coming up with the idea of PAHCF, according to Modern Healthcare. The Federation has donated more than $170,000 to the DCCC over the past 10 years, including $15,000 last month.

Although the coalition was created last year, PAHCF only registered to lobby Congress for the first time last week. The lobbying firm Forbes-Tate disclosed that it’s been hired by the partnership to lobby Congress on “issues related to Medicare for all style proposals.” PAHCF opposes the concept of a universal, single-payer health care system, as well as more limited ideas, like a public health insurance option that would compete with private health insurers or allowing people to buy into Medicare when they turn 50.

- Vic Fazio, a senior advisor at lobbying firm Akin Gump Strauss Hauer & Feld and former California Democratic congressman, has raised nearly $130,000 for the DCCC this year. He has lobbied for Pharmaceutical Research and Manufacturers of America (PhRMA), a PAHCF member and the nation’s largest pharmaceutical trade association.

One of Thomas’ colleagues at Mehlman Castagnetti has advised House Speaker Nancy Pelosi as she’s worked to negotiate a deal with the White House on a prescription drug-pricing bill. Thomas has also lobbied for Chevron and the Edison Electric Institute, a trade organization for utility companies.

Gephardt has represented electric utility Ameren Services and the coal-fired electric plant Prairie State Energy Campus. Ameren’s latest filing says the company has lobbied on legislation that would call on the federal government to enact a Green New Deal, specifically on its “sections associated with energy sector emission reductions.”

“I think the Green New Deal is aspirational,” Gephardt said in March. “I don’t think it is entirely practical. But there is a lot going on already that moves us toward a carbon-free society or country, and electrification of vehicles, I think, is a really important part of this.”

- Steve Elmendorf, a former top-ranking Gephardt staffer, has bundled $175,000 for the DCCC this year. He currently lobbies for the Biotechnology Innovation Organization, a PAHCF member that represents pharmaceutical interests. He is also registered to lobby for the Federation of American Hospitals, oil company BP America and Wall Street giant Goldman Sachs.

- John Michael Gonzalez, a former Democratic House staffer, is a lobbyist with Peck Madigan Jones, and he has bundled almost $100,000 for the DCCC this year. He represents numerous health industry clients, including PhRMA and drugmakers Amgen, Astellas Pharma U.S., AstraZeneca, Celgene, Merck, and Novartis. He also lobbies for Cigna, America's Physician Groups and InnovaCare.

UPDATE 5/2/19: The DCCC amended its March 2019 bundler report after this story was published. This story has been updated to reflect additional numbers in the new filing.