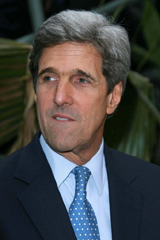 Senator John Kerry, recently nominated for secretary of state by President Barack Obama, has served in the upper house of Congress since 1985. The senior senator from Massachusetts would enter the State Department with experience as the chairman of the Foreign Relations Committee for both the 111th and 112th sessions of Congress and as the Democratic nominee for president in 2004.

Data: A MapLight analysis of campaign contributions to John Kerry from top industries and companies from July 1, 2006 - June 30, 2012.