Journalists, Pundits And Retired Politicians Put On A Show For Lobbyists 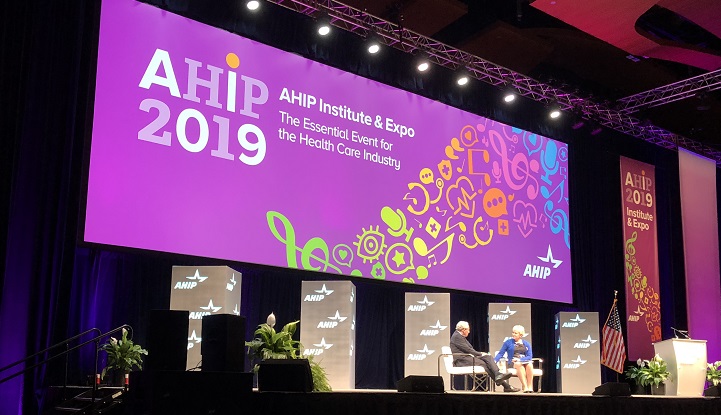 As another presidential election cycle shifts into high gear, the nation's largest special interest organizations will spend millions of dollars on consultants, advertisements, and events. They'll also spend millions on speakers -- lots of speakers, ranging from high-profile journalists such as Bob Woodward and Chuck Todd, to retired politicians like Paul Ryan and Jeff Flake.

The practice of paying high-profile Washington insiders to speak at industry trade shows and conferences, known as “buckraking,” isn't a recent development. But as the rules on political participation by nonprofits and trade associations have been loosened, it’s become remarkably common for lobbying groups to pay astronomical sums to influential insiders who drive news coverage and public opinion, according to a review of conference schedules from the last two years by MapLight and Tarbell.

“It’s very difficult to be critical of people who are giving you money,” said Ken Silverstein, editor of WashingtonBabylon.com, a website covering national politics and journalism, and a longtime critic of the practice. “It creates a conflict. But this has become endemic. Just endemic.”

‘The Painful Road of Introspection’

It’s easy to understand why journalists, who earn a median salary of $43,000, might not want to pass up a five-figure offer to speak to a trade organization for an hour. Bob Woodward, the legendary Washington Post investigative reporter who helped uncover the Watergate scandal, certainly hasn't -- despite the fact he’s published 19 books, including more than a dozen national bestsellers.

Woodward, who reportedly charges between $40,000 and $70,000 per event, spoke last month in Nashville, Tennessee, at an annual meeting of America's Health Insurance Plans (AHIP), the nation’s top health insurance lobby. The conference brought thousands of health-care executives together to listen to panels exploring ways to improve Americans’ health without threatening profits. As is the case with most paid speeches, Woodward’s talk provided little concrete value.

“Let's walk down the painful road of introspection,” Woodward said. “I think we in the media and lots of people, the critique of the elites, there's a legitimacy in there.” He then relayed an anecdote offering wisdom from his boss, Jeff Bezos -- the wealthiest man in the world -- about how he makes hiring decisions.

“We've got to find some way to put the listening -- and its okay to change your mind, it's okay to fail -- but particularly in all of these public, the health-care industry is out there," he continued. "People have conclusions about -- and it’s become kind of a fad. ‘Oh, let’s dump on health care, let’s dump on the media.’ But we've got to extract what we can learn from, I think.”

The U.S. spends almost twice as much on health care as other high-income countries. Americans pay more for drugs and common medical services, and health outcomes in the U.S.  rank last among high-income countries, according to a 2018 Commonwealth Fund study. Nearly 14 percent of adults were uninsured at the end of 2018, and many more people are underinsured or on inadequate plans that leave them unable to pay for medical care. Indeed, two days after Woodward’s speech, the Washington Post published a story that followed sick, desperate families as they sought medical treatment at a free, two-day clinic in nearby Cleveland, Tennessee.

Woodward said in 1996 that he doesn’t profit from his paid speaking engagements but donates the money to a family foundation, which then contributes the funds to charities. Tax records show that Woodward’s family foundation donated $600,000 between mid-2015 and mid-2018 to his alma mater, Yale University -- more than half of its total charitable donations. Woodward’s youngest daughter recently attended school there, according to his latest book. His foundation has also regularly donated to Sidwell Friends School, the Washington, D.C., private school that his children attended.

Woodward did not respond to questions about his speaking gigs.

“Newsroom employees are required to clear speaking engagements through the Post’s managing editor overseeing standards and ethics,” Shani George, the newspaper’s communications director, said in an email. “As our policy states, reporters should avoid accepting payments from organizations that try to influence issues they cover. We see value in having Post subject matter experts explain the role of journalism and the work they do to different audiences and aim to avoid conflicts of interest or the appearance of conflict of interest wherever and whenever possible.”

Guidelines on paid speeches vary widely across the industry, although the Society of Professional Journalists calls for reporters and editors to “refuse gifts, favors, fees, free travel and special treatment, and avoid political and other outside activities that may compromise integrity or impartiality, or may damage credibility."

An NBC News spokesperson said the company’s employees can’t accept money for speaking engagements. In the past, CNN has discouraged employees from taking payments from interests they cover. Fox News would not answer questions about its policies.

The New York Times forbids its staff from speaking at any industry or corporate function without express permission from management. If they’re allowed to speak, Times employees cannot accept payment.

AHIP, which boasted $65 million in revenue in 2017, spent more than $6.7 million on federal lobbying last year. Ten years ago, the organization secretly funded a $100 million campaign against Democratic health care reform efforts. Today, AHIP is a member of the Partnership for America’s Health Care Future, a health industry organization created to battle “Medicare for All,” which would create a comprehensive, universal health care system and eliminate the need for private insurance.

“As you can see, we’re quite open about who is speaking at our events, and on which subjects,” said AHIP spokeswoman Kristine Grow. “As a key health care industry convener, AHIP is always looking to engage policy and political experts for bipartisan conversations about what Americans can expect for health care’s future. We do not disclose details of our agreements with any of our speakers.”

Woodward isn’t the only Post reporter speaking to industry trade groups. Robert Costa, a Post national political reporter, spoke earlier this year to the American Hospital Association, another deep-pocketed trade organization that opposes Medicare for All. Costa’s session was billed as a private networking luncheon for “government relations officers.” His speaking fee ranges between $20,000 and $30,000, according to the Speaker Booking Agency website.

Amy Goldstein, the Post’s national health care policy reporter, spoke last year to the Bank Policy Institute, which represents big banks, on a panel with venture capitalist and “Hillbilly Elegy” author J.D. Vance. Longtime Post columnist George Will was a speaker at a members-only event hosted by the Consumer Healthcare Products Association, a trade group for companies that manufacture and distribute over-the-counter drugs and dietary supplements. Will’s speaking engagements cost between $40,000 and $70,000, according to the Washington Speakers Bureau.

NBC News anchor Chuck Todd attended the American Hospital Association’s annual meeting this year to discuss “how the 116th Congress will impact politics and policy.” Tom Costello, who covers aviation and transportation for NBC, spoke at a summit held by Airlines for America last year.

Charlie Cook, an NBC political analyst and the editor of the Cook Political Report, gave a lecture last year to the Association for Accessible Medicines, a trade group for generic drug manufacturers that opposes Medicare for All, about "the current political and legislative environment." This year, Cook spoke at a luncheon for the Motor & Equipment Manufacturers Association.

Cable news journalists and pundits also have given speeches to trade groups for fossil fuel interests. CNN senior political analyst David Gergen, a top aide to former President Ronald Reagan who reportedly charges between $40,000 and $70,000 per event, spoke at a 2017 meeting of the Edison Electric Institute, which represents investor-owned electric utilities.

Perino has also given speeches this year to the Credit Union National Association and the American Council of Engineering Companies. She was joined at the latter event by Democratic strategist and Fox political contributor Donna Brazile, who’s scheduled to speak at the American Bankers Association’s Washington summit next year with NBC political analyst Mike Murphy, a former top aide to the late Sen. John McCain, R-Ariz. Murphy reportedly charges between $25,000 and $40,000 per event, while Brazile’s fee typically ranges from $10,000 to $20,000.

In early March, CNN commentator and Democratic strategist Paul Begala spoke on a panel with former Trump White House legislative director Marc Short before the Federation of American Hospitals, which also opposes Medicare for All. Short started his new job in the Trump administration, as Vice President Mike Pence’s chief of staff, on March 11, according to Politico Playbook. Begala charges up to $25,000 per speaking gig.

Historians Doris Kearns Goodwin and Jon Meacham, who often appear on TV news shows, are frequent speakers at lobbying group meetings. Goodwin, who charges between $40,000 and $70,000 per speech, was booked at six trade organization conferences this year. Meacham was listed at four such events.

Washington’s proverbial “revolving door” spins at lobbying group meetings, too. Until 1991, trade organizations were allowed to directly pay lawmakers to speak at their conferences. Today, elected officials have to wait until they leave office to start collecting checks for appearing at industry events.

Former House Speaker Paul Ryan, R-Wis., who recently joined the board of Fox’s parent company, Fox Corporation, has spoken this year at events hosted by the Edison Electric Institute and the National Association of Chain Drug Stores. He’s scheduled to appear in October at the American Bankers Association’s convention in Seattle, and he will address a National Retail Federation show in January in New York.

Former Rep. Joe Crowley, D-N.Y., who became a senior policy advisor at lobbying firm Squire Patton Boggs after his loss last year to freshman Rep. Alexandria Ocasio-Cortez, spoke on a panel at a Motor & Equipment Manufacturers Association summit in April. He was joined by former Rep. Phil English, R-Penn, who has lobbied for the association.

The Bush family has also cashed in. Following in his father’s footsteps, former President George W. Bush has made hundreds of paid speeches since leaving office and has usually received between $100,000 and $175,000 per event, according to Politico. Last year, he spoke at AHIP’s annual institute and at a conference hosted by AdvaMed, which represents the medical device industry. His brother, former Florida Gov. Jeb Bush, addressed the drug store association last year.

Despite criticism levied at former Secretary of State Hillary Clinton for her paid speaking engagements -- which bothered two-thirds of American adults surveyed for an August 2018 Bloomberg poll -- neither politicians nor journalists appear likely to give up on speaking to lobbying groups: A bipartisan pair of recent former governors, Chris Christie of New Jersey and Terry McAuliffe of Virginia, are scheduled to appear on a panel at the Mortgage Bankers Association’s annual convention in October.