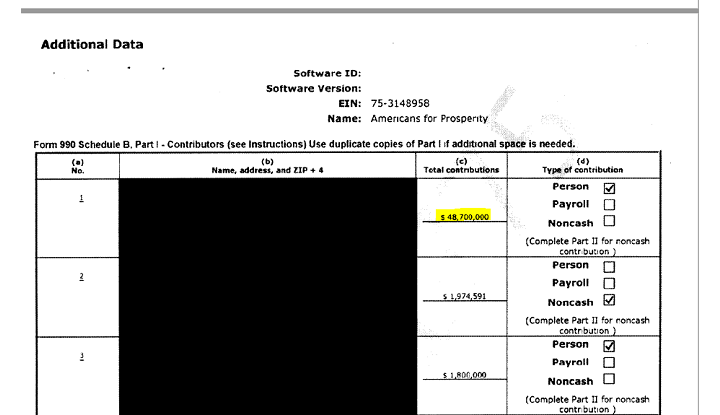 A single donation accounted for more than three-quarters of the $63.7 million donated to the Koch brothers’ flagship political organization in 2016, according to tax records obtained by MapLight.

The $48.7 million gift to Americans for Prosperity (AFP), the nonprofit “dark money” organization launched by billionaire brothers Charles and David Koch, was the largest of 122 contributions reported during the election year. Fewer than three dozen gifts that topped six figures made up almost 95 percent of the nonprofit’s total revenues.

Nonprofits like AFP are required to make their full tax returns -- which include a list of all donations of more than $5,000 -- available to the public, although they are permitted to redact the names and addresses of its donors. But the Koch-linked organization has repeatedly refused to release a tax return containing a redacted copy of the pages showing its donations.

A spokesman for the Arlington, Va.-based nonprofit. said earlier this year that letting the public view even the size of its donations “could reasonably be expected to be used to identify the names of contributors.” The organization has claimed it’s financially supported by more than 100,000 Americans.

“It’s time for an end to the secrecy of the grotesquely large political contributions corrupting our country,” said Daniel G. Newman, MapLight’s president and co-founder. “Our government is being bought by billionaires and foreign governments, and it’s time for us to take it back.”

MapLight obtained a copy of AFP’s 2016 form, known as a Schedule B, via the federal Freedom of Information Act. The Berkeley, Calif.-based money in politics website filed a formal complaint with the IRS in January to force AFP to release its records to the public.

The Schedule B is a valuable tool for investigators to determine the amount of nonprofit funds that come from large contributions. MapLight used a Schedule B in November to report that the dark money organization that financed Supreme Court Justice Neil Gorsuch’s nomination received almost 90 percent of its 2016 funding from a single $28.5 million donation.

While the $48.7 million donation made up most of AFP’s 2016 revenues, five more donors made million-dollar contributions. The seven-figure gifts added more than $7.2 million to AFP coffers. Another 26 donors made contributions ranging from $100,000 to $500,000, according to the Schedule B filing. The six-figure gifts tallied $4.4 million.

The billionaire brothers have made no secret of their ambition to influence the political debate. They estimated that the tab for promoting their libertarian agenda during the 2016 election cycle by a shadowy network of interconnected organizations -- known to detractors as the “Kochtopus” -- could climb as high as $900 million. At a January meeting for donors who contribute at least $100,000 to their network, the Kochs said they expect to spend between $300 million and $400 million to influence politicians and the public during the 2018 midterm election cycle.

After spending $20 million to help pass the $1.5 trillion Republican tax cut last year, AFP pledged to spend $20 million more to “educate the public” about the merits of the law. Under the new law, the wealthiest 1 percent of U.S. taxpayers, including the Kochs, would reap about 80 percent of benefits by 2027.

Margaret Sessa-Hawkins contributed to this story.