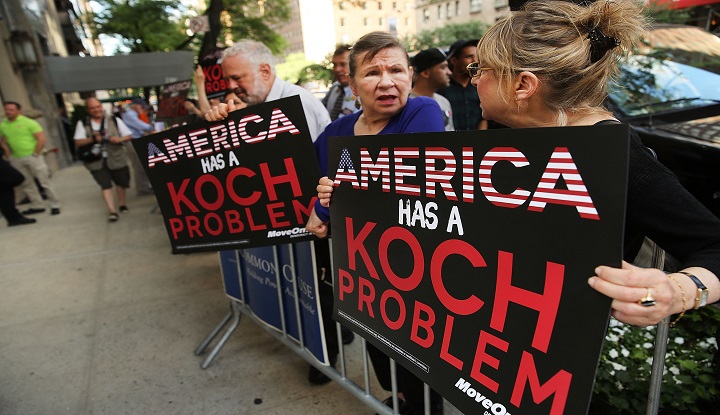 A week after announcing its refusal to release a section of its 2016 tax return that could be used to determine the number of large donations it received, the flagship political organization of the billionaire libertarian Koch brothers indicated it would also attempt to shield basic information about its 2014 and 2015 contributions from public view.

Americans for Prosperity (AFP), the dark money organization launched by Charles and David Koch, is the only one of more than a dozen nonprofits surveyed by MapLight that has refused to release a redacted Schedule B of its 2016 tax return. The schedule shows the size of donations that exceed $5,000.

The Internal Revenue Service allows nonprofits to redact the names and addresses of individual contributors, effectively rendering them anonymous. IRS instructions explicitly state that nonprofit organizations must provide full copies of their tax returns, including a redacted Schedule B, to the public.

AFP has argued that even disclosing only the amounts of contributions larger than $5,000 would allow the public to identify donors to the conservative organization. A document filed with the North Carolina Secretary of State’s office shows that AFP received more than 80 percent of its 2016 contributions from five donors; the individual amounts, however, can’t be determined without a Schedule B. MapLight, a Berkeley, Calif.-based money in politics watchdog, filed a formal complaint with the IRS earlier this month, asking the government to force the nonprofit to release a redacted Schedule B.

The annual tax return that all tax-exempt organizations are required to file, known as a Form 990, can be a lengthy document. It can include as many as 16 completed sections labeled “A” through “R.” The Form 990 reveals how much money an organization raised; the amounts that came from contributions and grants; the identities of its board members and top officials; salaries for key people; and grants made to other organizations.

The 46 pages of the most recent Form 990 released by AFP show the Arlington, Va.-based nonprofit received $63.7 million in grants and contributions during the 2016 tax year. Its expenses amounted to more than $58 million. It spent $33 million to “educate U.S. citizens about the impact of sound economic policy on the nation’s economy and social structure and mobilize citizens to be involved in fiscal and regulatory economic matters at the national level.”

Politically active nonprofits created under Section 501(c)(4) of the Internal Revenue Code are known as “dark money” organizations because donors can remain anonymous. The reason for donor anonymity stems from the civil rights era, when Alabama officials attempted to bar the National Association for the Advancement of Colored People (NAACP) from the state and sought its membership list. The U.S. Supreme Court ruled in 1958 that private organizations could keep their membership lists secret.

Even without names and addresses, the Schedule B is useful for journalists. MapLight, for example, used a redacted Schedule B to reveal that the Wellspring Committee, a nonprofit organization that helped fund a $10 million campaign to push U.S. Supreme Court Justice Neil Gorsuch’s confirmation, received almost 90 percent of its 2016 funding from a single $28.5 million donation.

“In general, Schedule Bs that have the names and addresses of donors redacted -- but still show the amounts donated -- can give the public a sense of how widespread an organization’s donor base is,” said Michael Beckel, manager of research, investigations, and policy analysis at Issue One, a nonprofit political reform organization based in Washington, D.C. “For instance, is a group primarily bankrolled by one donor, a dozen donors, or scores of donors? Even without naming names or identifying who the top donors are, redacted Schedule Bs provide a sense of how diverse an organization’s donor base is.”