March 1, 2013—MapLight, a nonpartisan research organization that reveals money's influence on politics, announces the launch of Voter's Edge Los Angeles and Voter's Edge Redondo Beach. The Voter's Edge project was made possible in part by funders including the Kaphan Foundation and the James Irvine Foundation.

Voter's Edge, a nonpartisan guide to ballot measures, shows each ballot measure's Funding Data—a top 10 list of contributors on the Yes and No side; Summary Information—what a "YES" or a "NO" vote would mean; the projected financial impact of the proposition; campaign arguments by proponents and opponents; Endorsements; News; Editorials; and Advertisements. The purpose of MapLight Voter's Edge is to provide voters with a reliable, nonpartisan source for information about ballot measures. 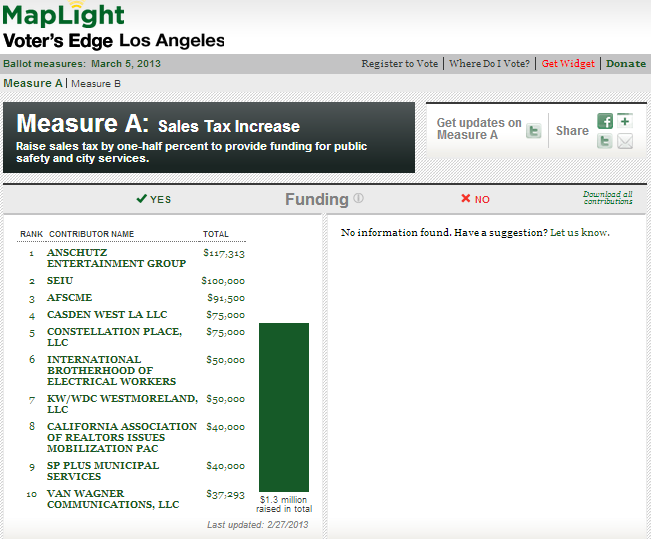 Voter's Edge Redondo Beach Measure A Funding Page
Measure A would rezone power plant property to phase out the power plant and replace it with industrial/recreational use.

Widgets can be customized to show a slideshow of propositions or a single proposition, and they include the largest contributor and total amount of contributions in support of and in opposition to a ballot measure. Each widget links to the ballot measure page. If you need technical assistance, please let us know: 510-868-0894.

MapLight is a nonpartisan research organization that tracks money's influence on politics.

Partners: MapLight will be expanding Voter's Edge to additional states and cities in partnership with state and local media outlets and community groups across the country. If you are interested in working with MapLight to bring Voter's Edge to your state, county, or city, please contact Jay Costa: jay@maplight.org.