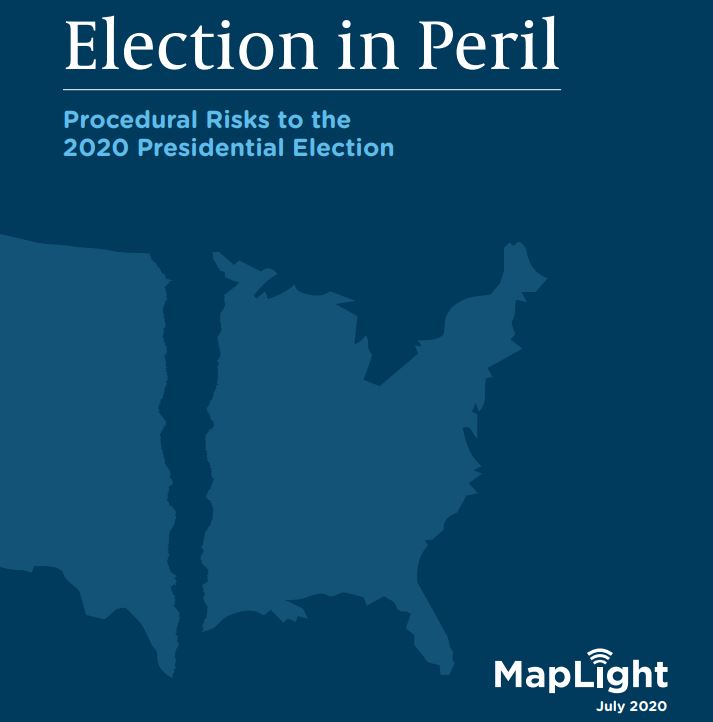 Public confidence in the integrity of the 2020 presidential election is likely to be under siege based on a combination of challenges presented by voting during the COVID-19 pandemic, pre-existing procedural gaps in U.S. election law, and efforts to undermine confidence in vote-by-mail, according to a new report released today by MapLight.

The report, Election in Peril: Procedural Risks to the 2020 Presidential Election, provides a detailed picture of the myriad threats to the election based on interviews with election experts, a review of federal election guidelines, and snapshots of election procedures in 17 swing states that could tip the balance of the Electoral College.

There are a number of scenarios that pose risks to the public legitimacy of the 2020 presidential election, including issues that could cause outsized disruptions to the political process, up to and including Constitutional crises. Potential trouble spots identified in the report include:

“We are playing with fire as a nation by failing to address the gaps and ambiguities in our election rules that could lead to a crisis in which both parties claim victory in the presidential election,” said MapLight President and Co-Founder Daniel G. Newman. “Instead of waiting for disaster, Congress should act now to protect the long-term integrity of our elections by clearly outlining how to resolve disputes about the presidential election. A functioning democracy depends upon having election rules that are crystal clear, not ambiguously cloudy.

“At the same time, protecting the legitimacy of the 2020 election also means we must quickly ramp-up vote-by-mail systems to make sure no one has to choose between protecting their health and exercising their right to vote,” added Newman. “The Senate should pass the HEROES Act immediately to provide states with enough resources to properly conduct mail-in voting to respond to COVID-19. It’s not too late to ensure everyone can vote safely while putting in place the protections our democracy needs. This is not about political party—it’s about making sure our democracy meets its basic functions during this unprecedented health crisis.”

In addition to outlining overarching risks to the election, MapLight’s report includes detailed profiles of every state that is not considered Solid Democrat or Solid Republican as of the beginning of July for the purposes of the presidential election by the Cook Political Report. Each swing state profile includes information on election officials responsible for elections, party composition of their legislatures, and specific laws and procedures regulating elections.