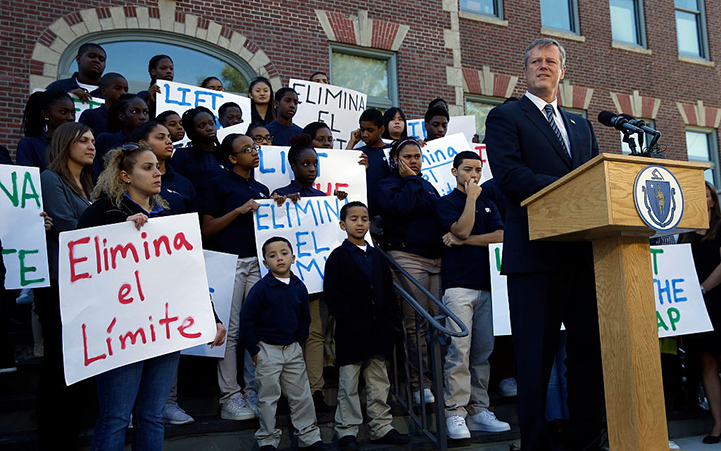 November 8, 2016 -  Massachusetts voters soundly rejected a controversial measure to expand the number of charter schools in the state on Tuesday.

The margin was surprising: the “no” side led 62 percent to 38 percent when the Boston Globe called the race. Polling projected the race would be close, and the fight over Question 2 was costly. Committees backing and opposing the measure spent more than $38.6 million combined, according to state records, making it the most expensive ballot measure campaign in Massachusetts history.

Gov. Charlie Baker, a Republican, was the initiative’s most high-profile booster. He filmed a television ad in support of the measure, and knocked on doors to persuade voters to vote yes in the campaign’s final days. A longtime advocate for charter schools, Baker presented the measure as a way to help students in struggling public school districts get a better education.

“I am proud to have joined with thousands of parents, teachers and education reformers in a worthwhile campaign to provide more education choices for students stuck in struggling districts, and while Question 2 was not successful, the importance of that goal is unchanged,” Baker said in a statement provided to the Globe Tuesday night.

Teachers unions opposed the measure, arguing it would hurt funding for public school districts. Unions and progressive leaders including Vermont Sen. Bernie Sanders took issue with how groups supporting Question 2 have been funded. Money poured in from out-of-state donors, including many Wall Street executives. The unions are upset that financial firms are earning fees from their members’ retirement savings, as their executives fund efforts to pass the initiative.

Last week, two Massachusetts teachers unions filed a formal complaint with the Securities and Exchange Commission against financial firms whose executives have bankrolled efforts to boost the measure. The complaint followed an International Business Times and MapLight investigative report, which found that executives at eight firms contracted to manage Massachusetts state pension money have contributed at least $778,000 to groups supporting Question 2.

The teachers’ unions believe that the executives’ donations may violate the SEC’s pay-to-play rule, which was designed to prevent financial firms that manage state pension money from funneling donations to officials who can influence state pension investment decisions. Baker is covered by the rule, because he appoints trustees to the Massachusetts Pension Reserves Investment Management Board (MassPRIM).

While the regulations do not cover ballot measure committees, the teachers unions believe that the financial executives’ donations may violate the rule’s anti-circumvention provisions, which say that firms cannot do “anything indirectly which, if done directly, would result in a violation of the rule.” The unions argue the executives’ donations are being used to fund ads featuring Baker, and may improperly aid his reelection campaign in 2018.

Steve Crawford, a spokesman for the union-backed Save Our Public Schools, called the victory against the measure "substantial."

This story is a collaboration between International Business Times and MapLight.