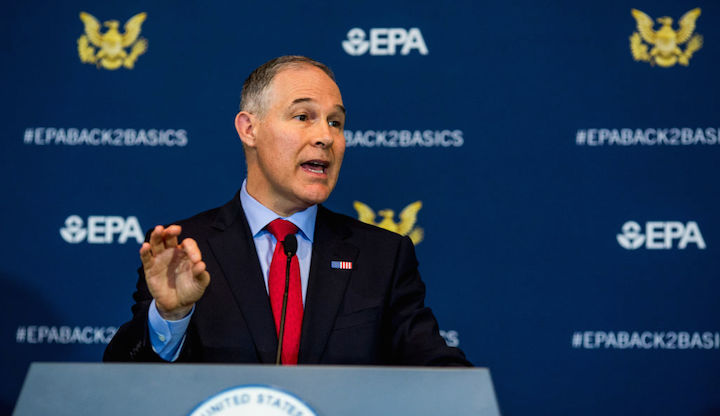 The state of Oklahoma paid Pruitt on Feb. 13, 2017 for a mirror, a plant, a planter, and a vase that were purchased days before he was inaugurated in 2011. A spokeswoman for Pruitt’s successor, Oklahoma Attorney General Mike Hunter, told MapLight that no one currently working there could explain why the items were purchased. She said the items are all still in the building. Pruitt was confirmed as the EPA head on Feb. 17.

The reimbursement request provides more evidence that Pruitt is more frugal with his own money than with public funds. As Oklahoma attorney general, Pruitt spent significantly more than his predecessor. The EPA has spent millions on a 20-member security team to protect Pruitt at all times. He has frequently flown first-class, and he sought to lease a private jet that would have cost taxpayers $100,000 every month. The EPA spent $43,000 on a secure phone booth for Pruitt's office -- which may have violated federal laws.

The $400 reimbursement was the second-largest payment that Pruitt sought during his six years as Oklahoma attorney general, according to MapLight’s review of 578 pages of state travel and reimbursement records. The records show that Oklahoma taxpayers often footed the bill for Pruitt’s efforts to boost his national profile. In other cases, Pruitt’s trips were funded by conservative think tanks bankrolled by energy interests and right-wing billionaires.

An EPA spokesperson did not respond to questions from MapLight.

In 2014, the Oklahoma attorney general’s office paid to send Pruitt to speak at the annual meeting of the American Legislative Exchange Council, a nonprofit that produces model legislation for conservative lawmakers across the country. A month later, the office paid to send Pruitt speak at an event hosted by Americans for Prosperity, the Koch network’s flagship political organization. Soon after, the state paid for Pruitt to speak on a panel hosted by the Cato Institute, a libertarian Washington, D.C.-based think tank funded heavily by billionaire libertarian brothers Charles and David Koch.

Leo shepherded Supreme Court Justice Neil Gorsuch through a 2017 Senate confirmation process, and he has served as an outside adviser to President Donald Trump. Leo was previously a director of a nonprofit that donated $145,000 to the Rule of Law Defense Fund, a policy group for Republican attorneys general, while Pruitt served on its board. Leo was also reportedly “instrumental” in creating the Judicial Crisis Network, a dark money organization that spent $10 million supporting Gorsuch and has financed groups working to elect GOP attorneys general.

In recent years, the Federalist Society’s biggest donors have included the Koch brothers; Koch Industries, the family’s energy and chemical conglomerate; and Donors Trust and Donors Capital Fund, two “dark money” organizations within the Koch orbit that act as banks for other conservative nonprofits. The Mercer Family Foundation, funded by the controversial conservative hedge fund billionaire Robert Mercer, has also been a top donor.

The American Federation for Children, a dark money education group that was led by current U.S. Education Secretary Betsy DeVos, paid for Pruitt to travel to Washington to speak at its annual policy summit in 2016. Records show Pruitt also took a trip financed by Americans United for Life, and another trip partially funded by the Faith & Freedom Coalition. Both are conservative nonprofits opposed to abortion.