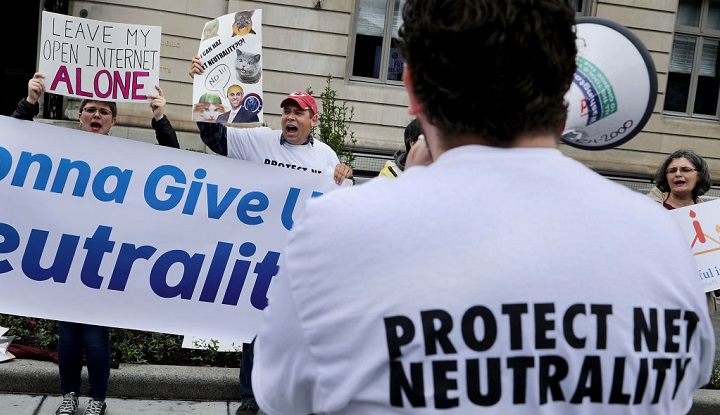 A pair of telecommunications industry trade organizations gave more than $3 million to nonprofit organizations that helped secure the repeal of net neutrality policies last year, according to tax returns reviewed by MapLight.

CTIA, the Washington, D.C.-based nonprofit whose members include AT&T, Comcast, and Verizon, and NCTA--The Internet and Television Association (formerly known as the National Cable and Television Association), emerged on the winning side of a decade-long battle over rules that required internet providers to offer equal access to all users. The Federal Communications Commission, led by a former Verizon lawyer, voted along party lines last December to scrap rules designed to prevent carriers from blocking content, throttling speeds to specific websites, or offering preferential treatment to certain customers.

The battle over net neutrality has been one of the more high-profile, consumer-oriented policy fights of the decade, and the donations from the trade organizations were a relatively small portion of the special interest money that flooded the debate. While it had been suspected that conservative dark money was supporting the telecommunications giants, the tax returns reveal they funneled millions to nonprofits that supported pushing their anti-regulatory agenda into another daily part of American life.

CTIA also contributed $302,500 to the National Conference of State Legislatures (NCSL) and its foundation. AT&T, Comcast, and NCTA are “platinum sponsors” of the conference, which means they’ve contributed at least $25,000 to the NCSL. Both CTIA and the Charles Koch Institute, which have donated $12,500, are listed as “gold sponsors.” NCSL has expressed unhappiness with net neutrality guidelines, noting that it “has long supported policies promoting an open, accessible, and vibrant Internet consistent with the principles of ‘light touch’ regulation.”

More than half of the CTIA’s grants were directed to MyWireless.org, a subsidiary nonprofit. According to its tax return, the subsidiary funneled a sizable amount of the $1.24 million it received from CTIA to conservative dark money organizations. MyWireless.org gave $85,000 to the Free State Foundation, a conservative research organization with ties to ALEC; $25,000 to the Franklin Center for Government and Public Integrity, a Chicago-based, Koch-funded project; and $10,000 to the State Policy Network, an Arlington, Va., nonprofit described by the Center for Media and Democracy’s SourceWatch as an umbrella group that acts as “the tip of the spear of far-right, nationally funded policy agenda in the states that undergirds extremists in the Republican Party.” NCTA gave an additional $15,000 to the State Policy Network and another $135,000 to the Free State Foundation, tax records show.