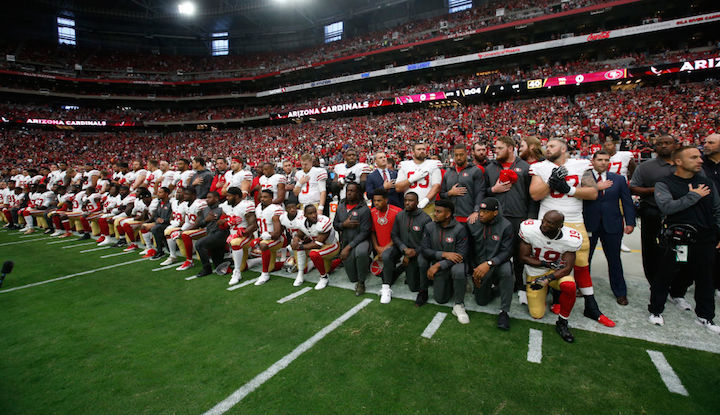 One of the nation’s most powerful political lobbying organizations is taking on the country’s most popular professional sport.

In “We Stand,” a one-minute segment posted on the National Rifle Association’s website, former U.S. Navy SEAL Dom Raso explains that he stands during the singing of the national anthem at professional football games to honor the country’s veterans. Raso is the founder of Dynamis Alliance, a company that sells personal armor, knives, and gun accessories. He wears a t-shirt emblazoned with his company’s logo for the video spot.

Although the segment never directly speaks to the pre-game National Football League protests, an acoustic version of the national anthem plays in the background during the video. Raso also mentions stadiums in his monologue, a reference to the anthem playing before sports events. “We are the National Rifle Association,” Raso declares to close out the segment. In a description that appears on the NRA website next to the video, Executive Vice President and CEO Wayne LaPierre is quoted: “NRA members stand for the flag, and they want the whole country to know it.”

The video first appeared on the NRA’s website and YouTube page on Sept. 25. It was also promoted widely across the social media platforms of the organization’s video streaming service, NRATV. The video debuted three days after President Donald Trump told a raucous Alabama rally that NFL owners should fire any “son of a bitch” who knelt during the anthem.

The NFL player’s union responded to the President’s comments on the protests by saying that “no man or woman should ever have to choose a job that forces them to surrender their rights.” The pregame protest was begun by then-San Francisco 49ers quarterback Colin Kaepernick during the 2016 preseason as a form of peaceful protest meant to draw attention to issues of police brutality and racial inequality in America. In the wake of Trump’s tirade, an increasing number of NFL players knelt during the pre-game anthem. On Sunday, Vice President Mike Pence walked out of an Indianapolis game after visiting 49ers players knelt during the anthem.

The protests highlighted the racial divide between NFL players and fans. An Oct. 2-3 Rasmussen poll claimed almost one-third of viewers were less likely to watch NFL games as a result of the protests, with whites twice as likely to boycott the games. About 70 percent of the NFL’s players are black.

The NRA video was created for “Freedom’s Safest Place,” a channel on the lobby’s subscription video service, NRATV, which launched in fall 2016. The NRA said the video will appear “in high-profile, upcoming television broadcasts.” According to the channel’s description, “Freedom’s Safest Place” features segments that alert viewers to threats to their freedom, including “terrorism … dishonest leadership … hatred toward our law enforcement” and “how our culture of political correctness destroys our freedom of speech and religion.” NRATV features 34 shows, and is carried by Apple TV, Roku, Amazon Fire and Chromecast.

The NRA didn’t respond to requests for comment or explain the link between gun rights and standing for the national anthem. But the organization has been a strong supporter of Trump and the Republican Party. Despite endorsing Democratic candidates in the past, it poured $30 million into the White House race and $23 million into electing Republican candidates for Congress during the 2016 elections.