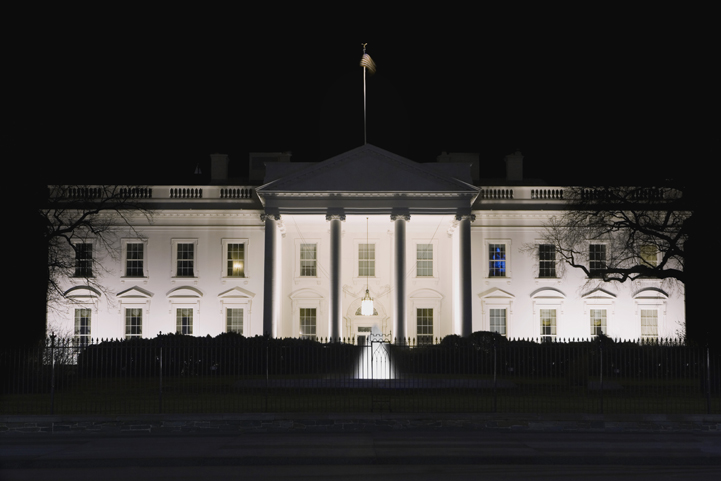 The White House in Washington, D.C.
Photo from Glowimages via Getty Images.

The exclusive event drew scant public attention. For one, it wasn’t on the president’s public schedule: a White House advisory simply said he had “no public events scheduled” that day. And the White House visitor log, released three months later, didn’t highlight Roberts’ attendance. She visited under her married name, along with her husband, cinematographer Danny Moder.

Some of the other visitors to the White House residence that evening were titans in their own industries. One couple in attendance, private equity executive Mark Gallogly and his wife Lise Strickler, had recently contributed $340,000 to the Barack Obama Foundation. Tom Campion, founder of the surf wear clothing chain Zumiez, and his wife, Sonya, donated $500,000 to the foundation in the months before the event.

Obama has frequently opened the White House doors to the wealthy donors who have financed his political campaigns, the Democratic National Committee (DNC), and Organizing for Action, a nonprofit the president created to mobilize grassroots supporters to advocate for his agenda. Those doors have also been opened to those making substantial contributions to Obama’s private foundation, as it seeks funding for the construction of a monument to his presidency.

“The 2.2 million visitor records released thus far demonstrate the broad range of individuals who have visited the White House. The fact is, being a supporter of the president does not secure you a visit to the White House, nor does it preclude you from one,” Jennifer Friedman, a White House deputy press secretary, said in a statement provided to MapLight.

“The president has been committed since his first day in office to reducing the corrosive influence of money in politics, starting when he signed an executive order instituting unprecedented reforms, and doing more since then to close the revolving door of special interest influence than any president before him,” she added.

The Obama Foundation did not respond to a request for comment from MapLight.

Gallogly, who co-founded the private equity firm Centerbridge Partners, has been invited to the White House grounds 122 times since 2009. Of those invitations, a dozen were for small gatherings with the president and fewer than 30 attendees at the White House. Gallogly has served on two of the president’s economic advisory councils, and has been invited to several meetings with top administration officials, including White House chief of staff Denis McDonough, former chief of staff Pete Rouse and former Obama economic advisor Gene Sperling.

A vocal booster of the president on Wall Street, Gallogly and his wife have contributed $14,600 to Obama’s presidential campaigns and $294,000 to the DNC since 2007, according to Federal Election Commission filings. Gallogly and Strickler donated another $330,000 to the Obama Foundation in 2015.

Campion and his wife have donated about $270,000 to the DNC since 2007, but they do not appear to have been to a small gathering with Obama in the White House before the one with Julia Roberts in January 2015. One day before that event, the Campion family met with John Podesta, who served as a senior advisor to Obama before joining Hillary Clinton’s presidential campaign.

Jim Simons, founder of the private equity firm Renaissance Technologies, and his wife gave $340,000 to the Obama Foundation in 2014. Visitor logs show the Simons family was invited to a smaller event with Obama at the White House for the first time in March 2015 -- a dinner with Tesla Motors CEO Elon Musk, Google parent company chairman Eric Schmidt, and a handful of prominent scientists and mathematicians.

Marilyn Simons had not been invited to the White House before March 2015, visitor logs show. She leads the Simons Foundation, a nonprofit organization whose website says its mission is to “advance the frontiers of research in mathematics and the basic sciences.” In April 2015, Simons met with Meredith Drosback, the assistant director for education and physical sciences in the White House Office of Science and Technology Policy. The Simons family contributed an additional $330,000 to the Obama Foundation last year.

The Obama Foundation raised $5.4 million in 2014, the year it was formed, and another $1.9 million last year. The New York Times has reported that Obama and his supporters are hoping to raise $800 million for the foundation.

MapLight analysis of White House Visitor Records, Federal Election Commission filings, and the Barack Obama Foundation’s tax returns for 2014 and 2015, based on the latest available data as of May 16, 2016.