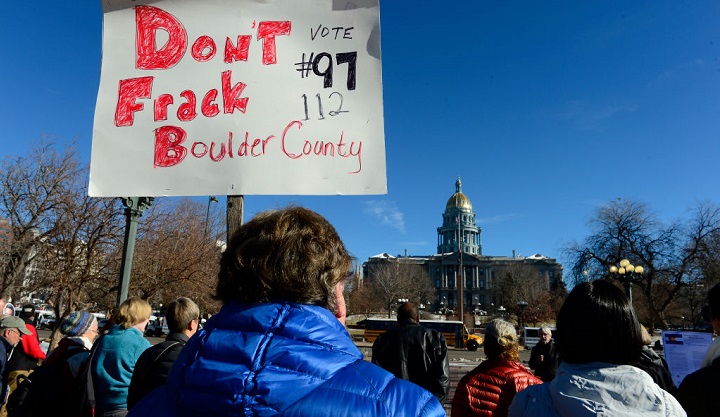 An activist holds an anti-fracking sign at a rally in Denver, Colorado in January 2019.
Photo by Helen H. Richardson/The Denver Post via Getty Images.

This story was produced by MapLight and published in partnership with Westword.

Two oil and gas companies with extensive interests in Colorado donated $1.7 million to a Republican “dark money” organization last year while it was working to defeat the state’s Democratic candidate for governor, Jared Polis. Despite their best efforts, Polis won, and Democrats have passed landmark legislation regulating oil and gas development.

In recent years, Texas-based energy companies Anadarko and Noble Energy have bankrolled successful campaigns to prevent Colorado from enacting new oil and gas regulations. The companies have fought local fracking bans, as well as efforts to force oil and gas operations to be set back further from homes. Even after a gas leak from an Anadarko flow line caused a deadly explosion in 2017, the company still held enough sway with Republican legislators to block a bill requiring energy companies to publicly disclose the locations of their gas lines and wells.

Democrats won decisive victories in state elections last November and now control both houses of the Colorado General Assembly. Former Governor John Hickenlooper, a frequent ally of the energy industry, finished his second term and is now running in the Democratic presidential primary. He was replaced by Polis, a five-term congressman who vowed to explore new oil and gas regulations, and who has already made good on his promise: Last month, he signed a bill to give local governments the authority to regulate oil and gas activities.

New corporate filings shed light on Anadarko and Noble Energy’s efforts to stop Polis from becoming governor. Anadarko and Noble Energy contributed $1 million and $700,000, respectively, to State Solutions, Inc., a Washington, D.C.-based nonprofit organization affiliated with the Republican Governors Association. State Solutions spent $615,000 on TV and radio advertising targeting Polis and promoting his GOP opponent, and at least $20,000 on Facebook ads. The nonprofit, which does not disclose its donors, also ran attack ads targeting Democrats in South Carolina and Oregon.

The Republican Governors Association, Anadarko and Noble Energy did not respond to questions from MapLight.

Although State Solutions was funded by oil and gas interests, its ads against Polis focused on health care and Republicans’ 2017 tax law. One ad lampooned Polis as holding positions more in line with “Radicalifornia” than Colorado and attacked him for supporting universal health care. Another ad attacked Polis over his bill to reverse the 2017 tax law signed by President Donald Trump.

The Trump tax law was a windfall for Anadarko. The company reported a $1 billion profit “from benefits gained from the new U.S. tax law, covering up what would’ve been a small financial loss otherwise” according to the Houston Chronicle.

Anadarko, which recently agreed to be acquired by Chevron and is considering a counteroffer from Occidental, and Noble Energy dominate the energy landscape in Colorado. Anadarko produces nearly 20 percent of Colorado’s crude oil and controls 400,000 acres in the state, according to Bloomberg, and Noble Energy holds 350,000 acres.

When four cities proposed bans on fracking within their city limits in 2013, Anadarko spent more than $327,000 on campaigns opposing the measures, and Anadarko and Noble Energy hired Pac/West Communications, a lobbying and public relations firm, to fight the initiatives. While three of the cities passed the proposals, the Colorado Supreme Court later ruled that cities cannot ban or regulate fracking, because their concerns are preempted by state law.

Anadarko donated to several pro-fracking organizations in 2014. The company gave $250,000 to the Colorado Liberty Alliance and donated more than $4 million to Protect Colorado’s Environment, Economy and Energy Independence (PCEEEI). The committee received another $4 million from Noble Energy. And between 2015 and 2016, Anadarko delivered more than $7.2 million to pro-energy political organizations and committees in Colorado, including $6.7 million to PCEEEI. Anadarko also gave $107,000 in 2016 to Vital for Colorado, a dark-money group that has worked to defend the energy industry’s interests. Noble Energy gave $5.6 million to the PCEEEI and $160,000 to Vital for Colorado in 2016.

That year, PCEEEI led an advertising campaign to persuade voters not to sign petitions supporting ballot measures that would have prohibited companies from placing oil and gas wells within 2,500 feet of homes and given local governments the authority to regulate fracking.

After the initiatives failed to qualify for the ballot, PCEEEI and Vital for Colorado donated $3.5 million to “Raise the Bar,” a ballot measure campaign to make it more difficult for citizen initiatives to be included on statewide ballots. Raise the Bar was supported by numerous other energy-linked political organizations. Anadarko also donated $250,000 directly to “Raise the Bar.” Then-Representative Polis joined most state Democrats in opposing the measure, although it had support from Hickenlooper and three former Democratic governors.

Proponents argued it would prevent irresponsible measures from reaching the ballot, but critics derided it as an anti-democratic power grab by special interests to block voters from setting new oil and gas regulations. The amendment passed in November 2016 with almost 57 percent of the vote. (A federal judge later blocked parts of the law as unconstitutional, but it was reinstated by an appeals court.)

In 2017, gas pumping through a severed Anadarko flow line caused an explosion that destroyed a house in Firestone and killed two people. In the wake of the tragedy, activists across the state vowed to take action, while Hickenlooper ordered an emergency review of the state’s oil and gas operations.

The aftermath of a fatal house explosion in Firestone, Colorado  on April 27, 2017 linked to an Anadarko flow line.  Photo by  RJ Sangosti of The Denver Post via Getty Images.

Only days after the explosion, Anadarko lobbyists pressed lawmakers to oppose Democrats’ legislation to require energy companies to publish maps detailing the locations of their gas lines and wells. Senate Republicans successfully filibustered the bill, killing it before it could be brought to a vote.

The Colorado Gas and Conservation Commission later updated its regulations, and mandated that companies cap abandoned flow lines or remove them entirely. Anadarko announced in May 2018 that it had reached a settlement with the families of the victims in the Firestone explosion.

In November, Colorado Democrats expanded their majority in the state House and took control of the Senate. They also elected Polis, who’s considered to be a more progressive Democrat than his predecessor, Hickenlooper.

In early March, the Democratic leadership introduced legislation to direct state energy regulators to prioritize public health, safety and the environment over energy production. It would also empower cities and towns to regulate oil and gas activities and determine where operations are located. The bill garnered significant pushback from state Republicans and energy lobbyists, including some associated with Anadarko and Noble Energy.

Industry lobbyists succeeded in convincing Democratic lawmakers to make some late changes to the legislation, including adding language to require any local government regulation meet a “necessary and reasonable” standard. Polis signed the bill into law on April 16.