Plastic bag makers spend to defeat one measure, pass another 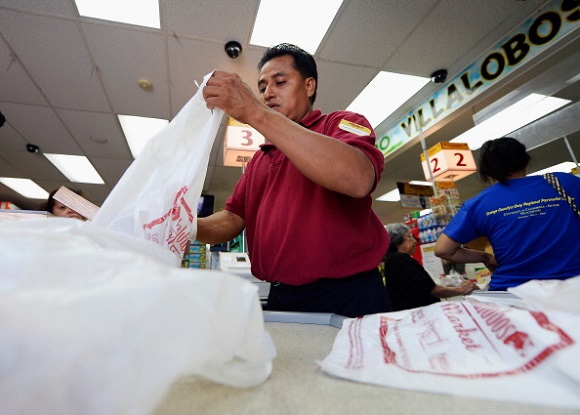 September 29, 2016 - Plastic bag and other plastics makers have given more than $6 million to the campaign aimed at preventing a plastic bag ban in California, a MapLight analysis has found.

Four plastic bag manufacturers -- each based outside of California -- have provided 97 percent of contributions to the American Plastic Bag Alliance (APBA), the sole committee working to defeat Proposition 67.

Proposition 67 would affirm a ban on single-use plastic bags that the state legislature passed in 2014 but that has not gone into effect because opponents qualified it for referendum. Prop 67 would also mandate that stores charge customers 10 cents for recycled and reusable bags.

The APBA is working to instead pass Proposition 65, which would direct fees from carryout bags purchased at grocery stores to an environmental fund if a state ban were implemented. Grocery stores currently keep the money in cities and counties where customers already pay a fee for carryout bags. Prop 67 would make that a statewide practice.

The initiatives’ fates are linked; if both measures pass, the initiative receiving more votes will dictate where revenue from reusable bags will be allocated. If Prop 65 passes with more votes, the courts may interpret this as invalidating the plastic bag ban enacted by Prop 67.

The Society of the Plastics Industry, a plastics trade association that counts over 1,000 plastics makers among its members, founded the APBA in 2005. The committee began fundraising to defeat the plastic bag ban in 2014. Since 2014, the APBA has spent $5.5 million on petition gathering, mailers and consultants in opposition to Prop 67 and in support of Prop 65. $3 million of that money was spent before the 2016 election cycle even began.

Supporters of the single-use plastic bag ban, including environmental groups and grocery stores, have contributed $1.7 million to four committees. These committees have spent over $1.4 million to support Prop 67 and had about $315,000 on hand at the end of June. The Monterey Bay Aquarium Foundation has also independently spent $30,000 in support of the initiative.

Proposition 65 currently has no financial opposition, but no environmental groups have given money to support it either. Critics of the measure have noted that it may have been designed to confuse voters or pit grocers against environmentalists. Editorial boards at the San Francisco Chronicle, the Los Angeles Times and San Jose’s Mercury News have recommended a vote against Prop 65.

MapLight analysis of contributions to committees supporting or opposing Propositions 65 and 67 using data available from the California Secretary of State as of September 29, 2016.