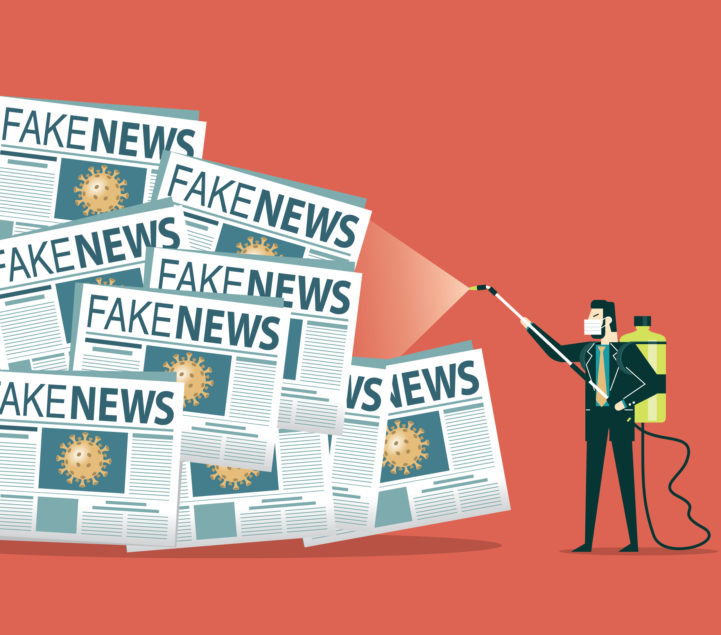 An 'infodemic': that is what the World Health Organization has labeled the miasma of coronavirus-related conspiracy theories, misinformation, and lies circulating on social media.

Beyond its potentially disastrous consequences for public health, disinformation about the pandemic has become a weapon for organized political actors. Through posts suggesting that Dr. Anthony Fauci (one of the nation’s leading experts on infectious disease) is a “deep-state” operative, that Democratic presidential candidate Joe Biden has contracted the virus, or that the pandemic has been overblown for partisan reasons, political forces have sought to manipulate public opinion, jeopardizing democracy alongside public health. With the 2020 election well underway, the situation underscores how grave a threat digital deception is to the integrity of our political system, and how urgently we need to address it.

We know from previous elections that online disinformation has been deliberately deployed to sow discord and distrust in order to suppress the vote and undermine confidence in democracy. Now — at a time when voting processes have been physically disrupted, political campaigns are increasingly moving online, and a climate of fear and uncertainty has left the public more open to manipulation — the situation is exacerbated exponentially.

In many ways, the manipulative practices we are seeing during the coronavirus pandemic mirror previous patterns. Political actors are using online disinformation to push a variety of agendas, often at odds with the public interest, and frequently without any transparency into where messages are coming from. Members of the alt-right, for example, have been circulating the claim that the coronavirus is part of a Democratic plot to prevent Trump’s reelection. President Trump and his political allies, meanwhile, have promoted the idea that Democrats are obstructing access to hydroxychloroquine — despite the lack of scientific evidence that the drug is an effective and safe treatment for coronavirus. Indeed, Trump’s personal attorney Rudy Giuliani was temporarily suspended on Twitter for spreading misinformation touting the drug.

Foreign actors are similarly engaging in deceptive digital practices to spread propaganda. China is pushing a conspiracy theory that it was Americans who brought the virus to Wuhan, while Russia has deployed what one State Department official called “swarms of online, false personas” to plant narratives blaming the United States for the coronavirus outbreak and accusing the U.S. of using bioweapons against China.

Because of the imminent danger to public health, social media companies have responded more decisively to this crisis than they did to the rampant political disinformation surrounding previous elections. Facebook, Google, LinkedIn, Microsoft, Reddit, Twitter and YouTube released a joint industry statement saying they are working together to combat misinformation around the pandemic. Facebook has prioritized fact checking coronavirus-related posts and surfacing credible information, including offering ad credits to the WHO to promote accurate data. YouTube has been displaying CDC links below any videos on coronavirus. Twitter has said it will remove all posts that in any way encourage people to catch or transmit the virus.

However, as with their previous attempts to address political disinformation, the platforms’ responses have not been consistent or adequately enforced, and do not go far enough towards protecting our democracy from manipulation. Much more decisive action is still needed to combat digital deception.

One of the first steps should be to ensure that there is adequate transparency for all paid political communications online, via on-ad disclaimers and a standardized, publicly accessible database, so that the public knows who paid for a message and who that message targeted.

Platforms also need to develop a clear and consistent policy to minimize lying in political communications. They have taken a firmer stance against coronavirus misinformation from politicians and political figures, but Facebook, at least, still allows politicians to lie freely about other issues. This inconsistency needs to be fixed and policies against deliberately spreading disinformation uniformly enforced.

Lastly, in much the same way that social media companies are currently directing people towards authoritative health information during the current crisis, they should similarly promote credible election information from local press and election officials. And as Congress considers funding for the states to support offline electoral processes in the face of public health needs, it should provide support to disseminate reliable election information online.

The coronavirus pandemic highlights exactly how much of a threat digital deception is and shows how urgently we need to address this issue with clear regulations and policies. Our own health, as well as the health of our democracy, depends on it.